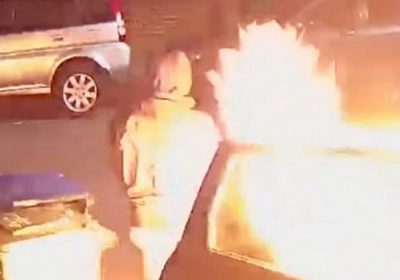 This is the shocking moment a suspected arsonist set a famous TikTok family’s car on fire – which then spread to their home.

Devastated parents Nick and Jess Smithy as well as their newborn baby and two young daughters managed to escape just in time after noticing their car ablaze in the early hours of Thursday morning (July 15).

The family, who have more than 2.8 million followers on their TikTok @thesmithyfamily, had spent months building their dream home in south London before the horrific incident.

And Nick has now shared footage appearing to show the two culprits responsible for the crime.

The video shows two hooded men approaching the family’s grey vehicle which is parked on the driveway.

One pries open the door with a crowbar before another appears to pour liquid onto the backseat.

Within seconds, the car is ablaze and the man can be seen running away with his arm on fire.

The video ends as the family’s screams of terror can be heard from inside the house.

Nick said: "The level they have gone to to do this is unreal. We had to go through that ordeal.

"It can't happen again to someone else. Next time it could be someone that's died.

"So please, take a good look, give this a share – let's see if we can find these people."

The Smithy Family had suffered several disturbing incidents at their property before the fire, after their address was leaked online.

Nick told The Sun they had received over 100 Just Eat deliveries which weren’t paid for and were cash on collection.

Prostitutes have also been ordered to their door recently.

The Metropolitan Police said they are investigating the incident but no arrests have yet been made.

A London Fire Brigade spokesperson said: "We were called to reports of a car alight that had spread up the outside of the house.

"There were a number of mobility scooters parked outside which had caught alight and were producing a large amount of smoke and flames.

"Everyone was out of the building before we arrived, and crews worked incredibly hard to prevent further damage to the inside of the property and to neighbouring properties."

To keep up to date with all the latest news stories, make sure you sign up to one of our newsletters here.