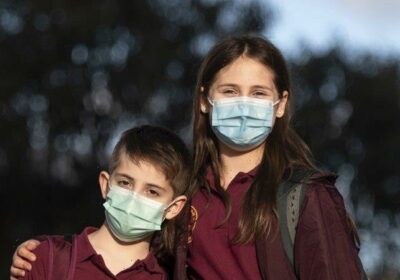 Widespread mask-wearing in schools could save dozens of lives each month and provide an extra layer of protection for Victoria’s oldest residents, who are being hospitalised about three times as much compared with previous COVID-19 waves.

New pandemic modelling by the Burnet Institute for the Victorian Health Department estimates that if masks were worn widely by almost everyone in public indoor spaces, including schools, the number of COVID-19 cases could drop by up to 23 per cent and deaths by 14 per cent. 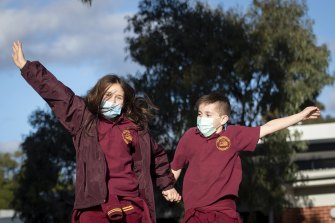 The Victorian government decided last month not to mandate mask-wearing in schools and has instead encouraged students to wear them.Credit:Penny Stephens

Universal mask-wearing in classrooms for those aged eight and over is expected to cut the number of deaths between July and October by 5 to 10 per cent, according to the modelling.

Victoria’s Chief Health Officer, Brett Sutton, said that while the expectation of perfect compliance might be overly optimistic, “mask-wearing in schools is an intervention that we know can make a difference”.

“If we make an assumption of 100 per cent mask-wearing in schools, then we can drop those new cases by around 15 per cent … and deaths by 5 to 10 per cent,” Sutton said.

“That’s a significant proportion in modelling, but it’s up to us how much we make that happen in the real world.”

Acting chief health officer Ben Cowie advised Victorian Health Minister Mary-Anne Thomas in early July that mask-wearing should again be made mandatory in schools for those in grade three and above.

The recommendation wasn’t adopted by the state and the concept has been criticised by some for asking too much of the young, who are generally at the lowest risk of falling very ill from COVID-19. Instead, students have been encouraged to wear a mask.

Last month was the state’s deadliest month since the pandemic began, with 737 COVID-19 deaths reported. New Victorian hospitalisation data shows that the number of people aged 75 and above needing hospitalisation has jumped dramatically since the Delta and Omicron waves.

During the Delta wave in September and October last year, just 17.3 per cent of those hospitalised with COVID-19 in Victoria were aged 75 or older. That has since increased to almost 50 per cent, based on data from late June to late July.

Sutton said this could be linked to the infectiousness of the BA.4 and BA.5 variants, as well as increased mixing, in which older people were starting to socialise again.

“Clearly, our older populations have protected themselves very well over the last two and a half years. But that also means that they haven’t had previous infections; they remain vulnerable to transmission.

“So when you’ve got a very infectious variant … then it can sweep through those older populations.”

Health authorities believe more than half of Victorians with COVID-19 do not know they are infected, aren’t testing or aren’t registering their positive rapid tests.

Vulnerable people, including those over 69 years, could also be missing out on antiviral medications.

“If you’re in a vulnerable or frail age group or with pre-existing illness, taking those oral therapies can make a big difference to keeping you out of hospital,” Sutton said.

Several epidemiologists have said the current Omicron outbreak may have reached its peak as COVID-19 numbers appear to be falling nationwide.