How the Mail titles dominate the news landscape How the Mail titles dominate the news landscape: MailOnline and sister publications are visited or bought by 50% more Britons than nearest print rivals

The Mail group’s newspapers and websites dominate the British news landscape, being read by 50 per cent more people than their nearest print rivals, a new report by industry watchdog Ofcom has revealed.

MailOnline, sister titles the Daily Mail and Mail on Sunday, and the group’s apps are read by 36 per cent of all British news consumers.

The next three brands in the list – Metro, the Sun titles and the Guardian/Observer – have 22 per cent reach each. 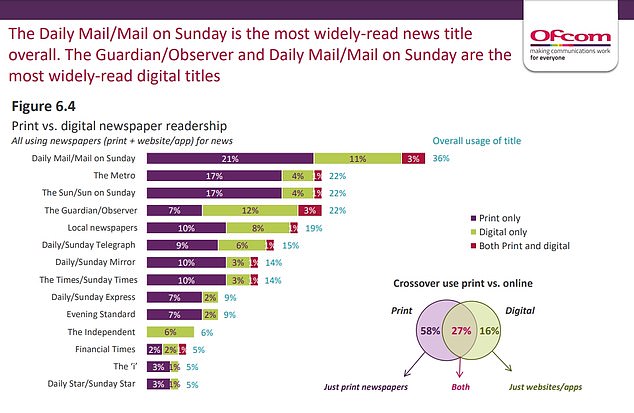 Overall, 17 per cent of all Britons use Mail titles for news, 70 per cent more people than visit or buy Sun titles and more than use the likes of Twitter and Google to keep up to date.

There was also good news for the Metro, who gained 2 per cent more of the market than in 2019, to reach a 11 per cent total this year.

Parent company the Daily Mail and General Trust also featured highly, taking 27 per cent of the wholesale market – 8 per cent more than The Sun’s firm.

Mail print titles are also the most widely-read overall, with MailOnline the best read digital title.

All the findings were revealed in Ofcom’s trusted News Consumption in the UK: 2020 report.

It was carefully curated through a number of fieldwork sessions in November and December 2019 as well February, March and April this year.

The report looks into how people consume their news across TV, radio and print as well as podcasts and social media.

As a news source across all platforms, including the BBC, ITV and Facebook, Mail titles account for 17 per cent of the market.

Meanwhile The Sun’s outlets only account for just 10 per cent across the board.

The figures, compiled from the responses of 4,576 adults, also saw Google drop below MailOnline in the same area.

There was also good news for the Daily Mail and General Trust as a company, with it holding strong since last year to reach 27 per cent of market readers across all platforms.

It is the parent firm owning the Daily Mail, Mail on Sunday, MailOnline, Metro and the i.

News Corp – who own The Sun and Times titles – have fallen to just 19 per cent, now just one point ahead of Global Radio. 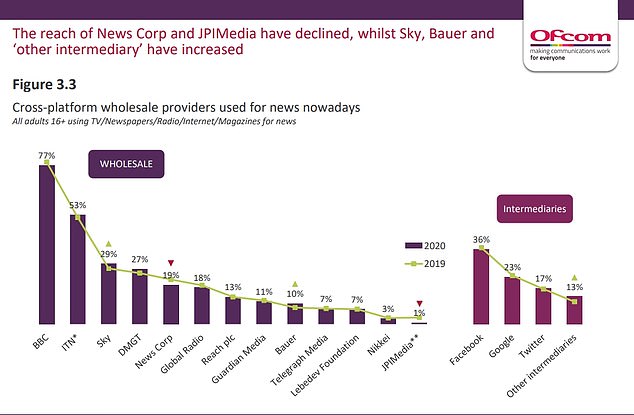 DMGT – which owns titles including the Mail, Metro and i – has 29 per cent of the share

The report also gives an insight into how readers find their news from the UK’s current newspaper-branded physical copies and websites.

MailOnline and the Daily Mail and Mail on Sunday attract 36 per cent of people interested in news.

Of that 21 per cent of them read just the newspaper, with 11 per cent just the website and a further 3 per cent reading both.

The Sun’s titles print are read by 17 per cent of respondents with just 4 per cent only reading their websites and 1 per cent taking in both – totalling 22 per cent of the share.