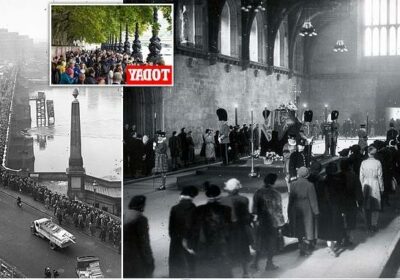 The long line of loyalty to the Crown: How thousands of devoted Britons huddled overnight in the rain to see George VI lying in state in 1952… 70 years before similar miles-long queue to see Elizabeth II’s coffin

It was shortly after 3am on a cold and wet February morning that the last of the solemn mourners filed past the majestic coffin of King George VI lying at rest in Westminster Hall.

The king had died peacefully in his sleep on February 6, 1952, when his daughter and heir – the then Princess Elizabeth – was in Kenya with her husband Prince Philip.

In the space of just three days up to February 15, just over 301,000 people queued for nearly four miles to pay their respects to the monarch who had led Britain through the dark days of the Second World War.

The Daily Mail reported at the time how, on the final day of the 72-hour lying-in-state period, more than 100,000 people filed past in the space of just 19 hours.

They persevered despite being battered by rain and sleet and having to cope with freezing temperatures and snow on the ground.

The moving scenes will be repeated from later today when the coffin of Her Majesty the Queen arrives at Westminster Hall to lie in state in the same spot as her beloved father.

Around 10,000 mourners have begun forming an orderly queue that is set to stretch five miles and last up to 40 hours. 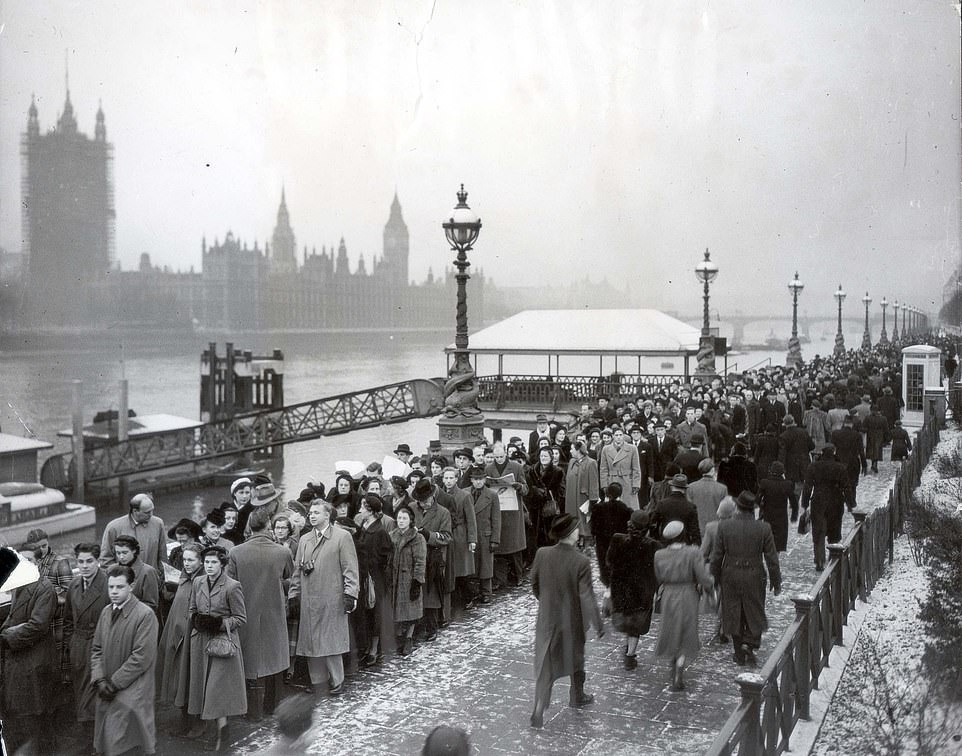 The queue for the lying-in-state of King George VI is seen extending along the south bank of the Thames by St Thomas’s Hospital as far as the eye can see. The image was taken on February 13, 1952 – the second day of the lying-in-state period 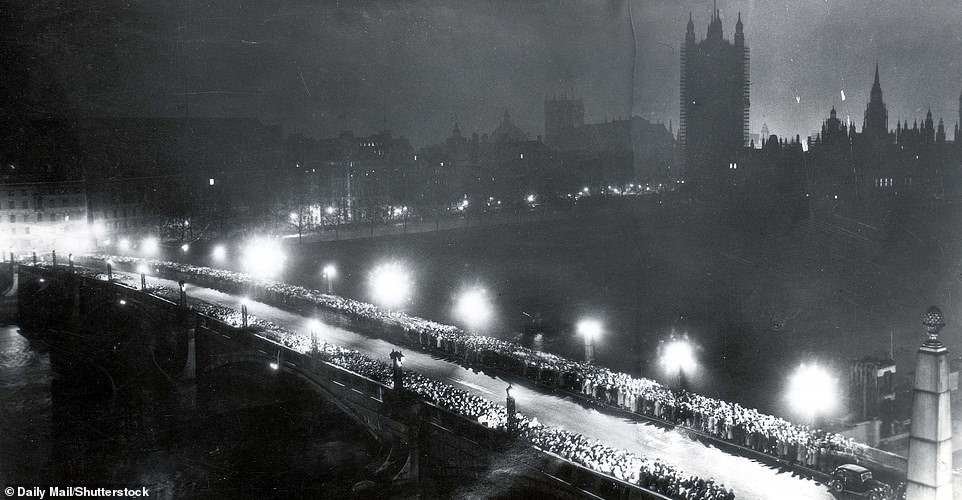 The mourners persevered despite being battered by rain and sleet and having to cope with freezing temperatures and snow on the ground. Above: The queue is seen stretching down both sides of Lambeth Bridge 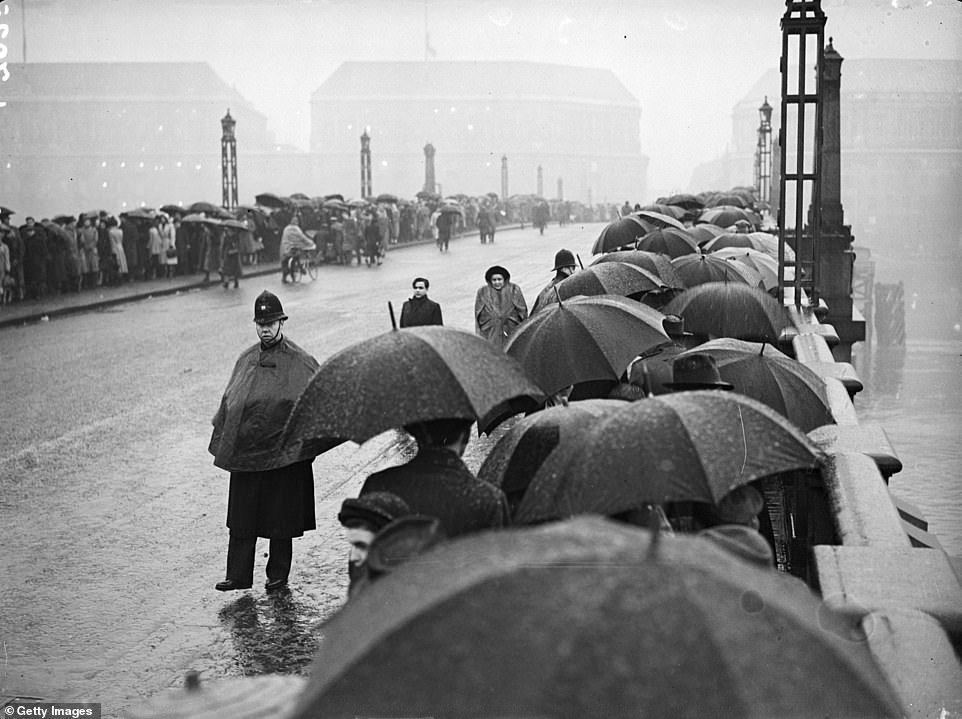 Policemen organise the crowds of people queuing in the rain to view King George VI lying in state at Westminster Hall. The line stretched across Lambeth Bridge down to Albert Embankment and Westminster Bridge, where it turned back on itself 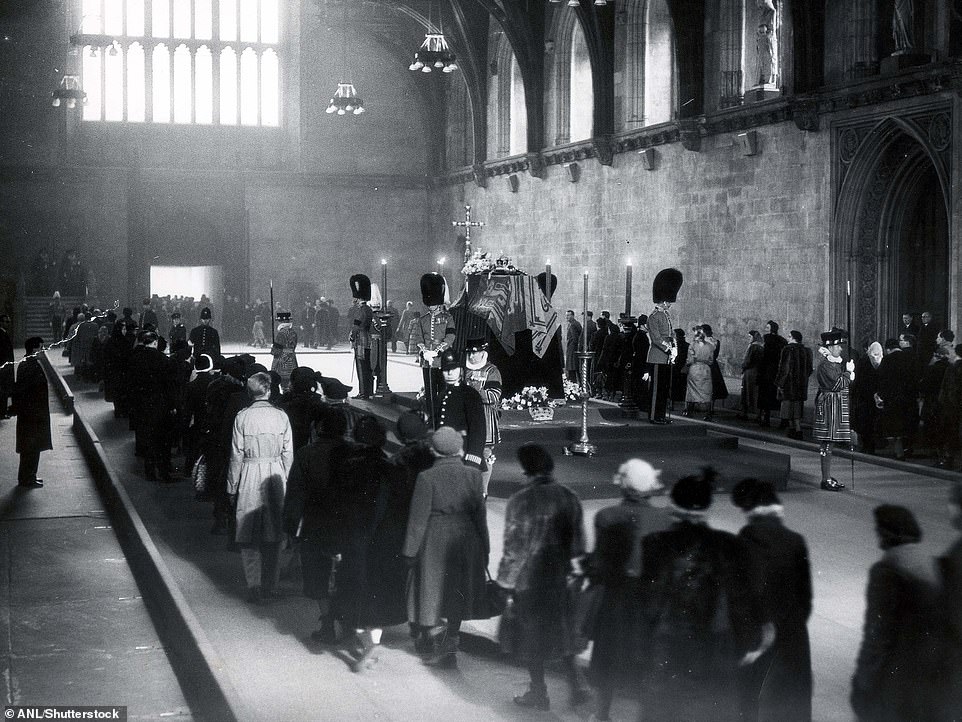 King George VI passed away while suffering from lung cancer.

The notice announcing his death read: ‘The King, who retired to rest last night in his usual health, passed peacefully away in his sleep early this morning.’

Princess Elizabeth was then proclaimed Queen in her absence by the Accession Council before she and Philip returned to London from Kenya on February 7.

Her Majesty then formally proclaimed herself Queen and Head of the Commonwealth and Defender of the Faith on at St James’s Palace.

The King’s casket was taken by train from Sandringham to London, where it then made its way to Westminster Hall.

Reporting on the last hours of the lying-in-state on February 15, 1952, the Daily Mail said: ‘The queue outside Westminster Hall, which at one time stretched ten deep from Parliament Square across both sides of Lambeth Bridge, thinned after midnight.

‘At 2.25 a.m. the last of the queuers entered the hall. The doors were kept open and hundreds of people continued to arrive. They were able to go in without waiting. 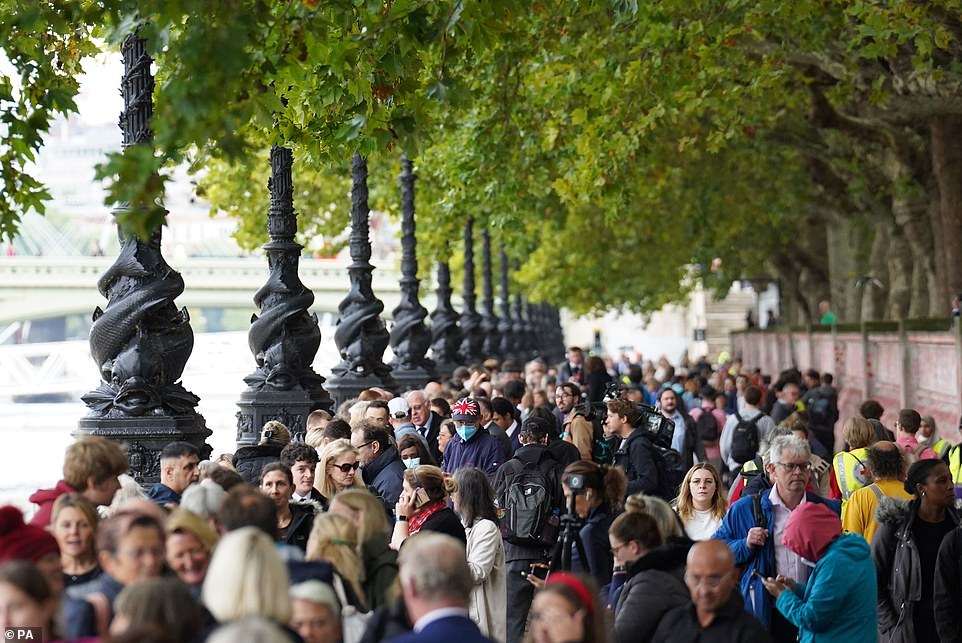 The moving scenes will be repeated from later today when the coffin of Her Majesty the Queen arrives at Westminster Hall to lie in state in the same spot as her beloved father. Around 10,000 mourners have begun forming an orderly queue that is set to stretch five miles and last up to 40 hours. Above: The queue on the South bank 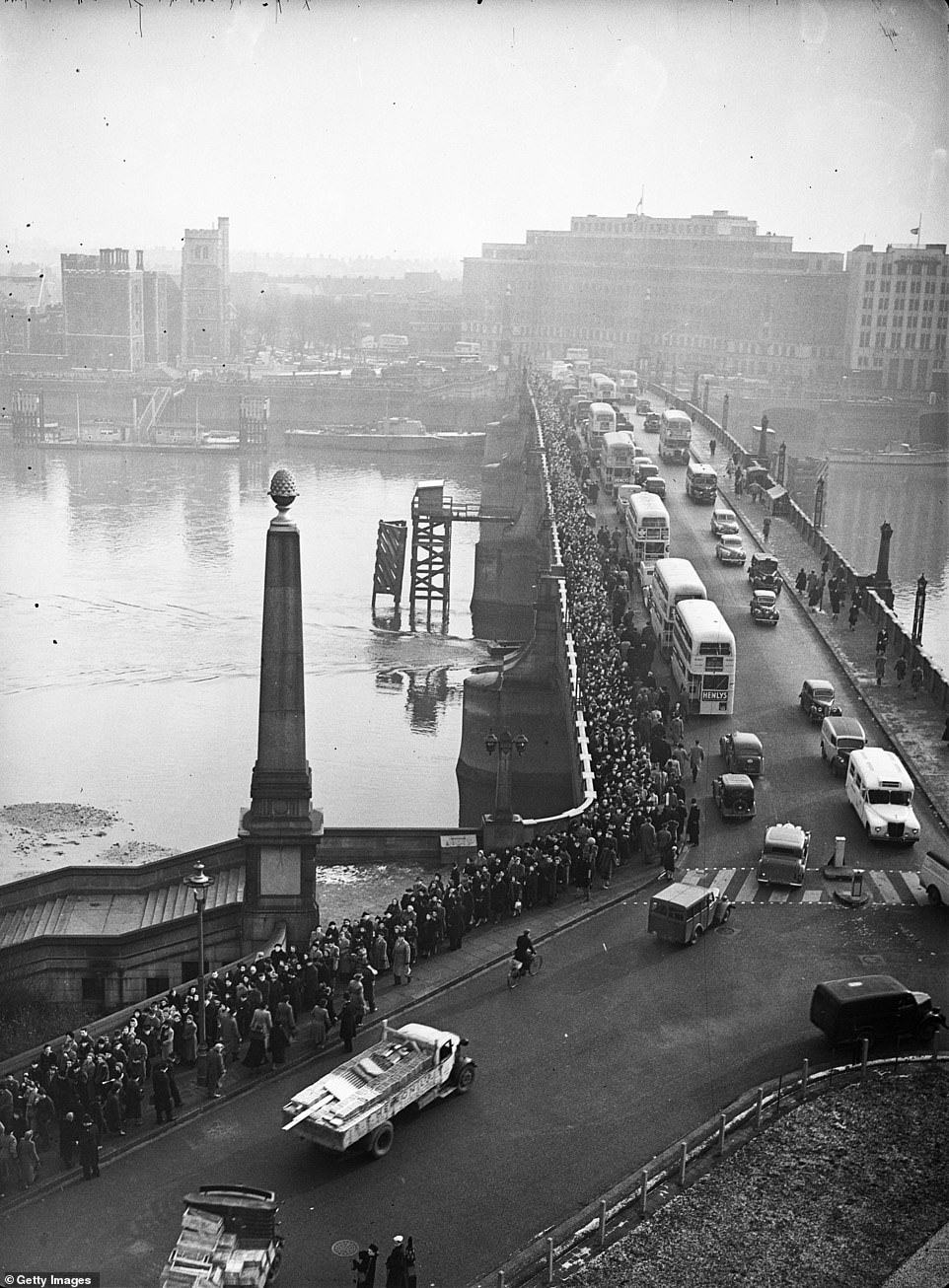 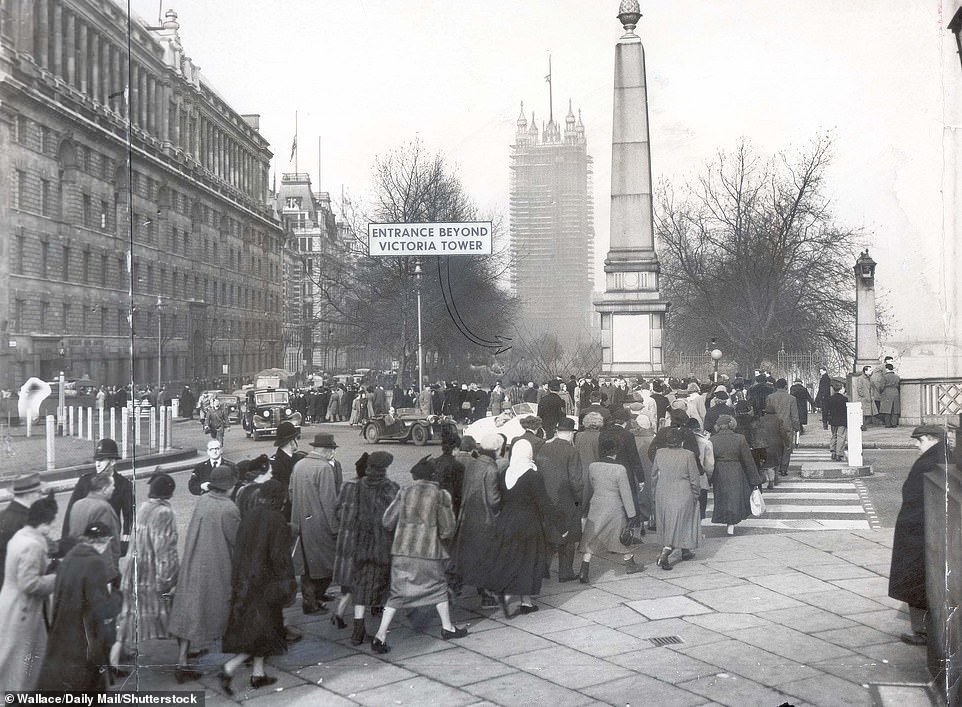 The queue to see King George VI is seen stretching across the road near Lambeth Bridge. The line eventually stretched for nearly four miles 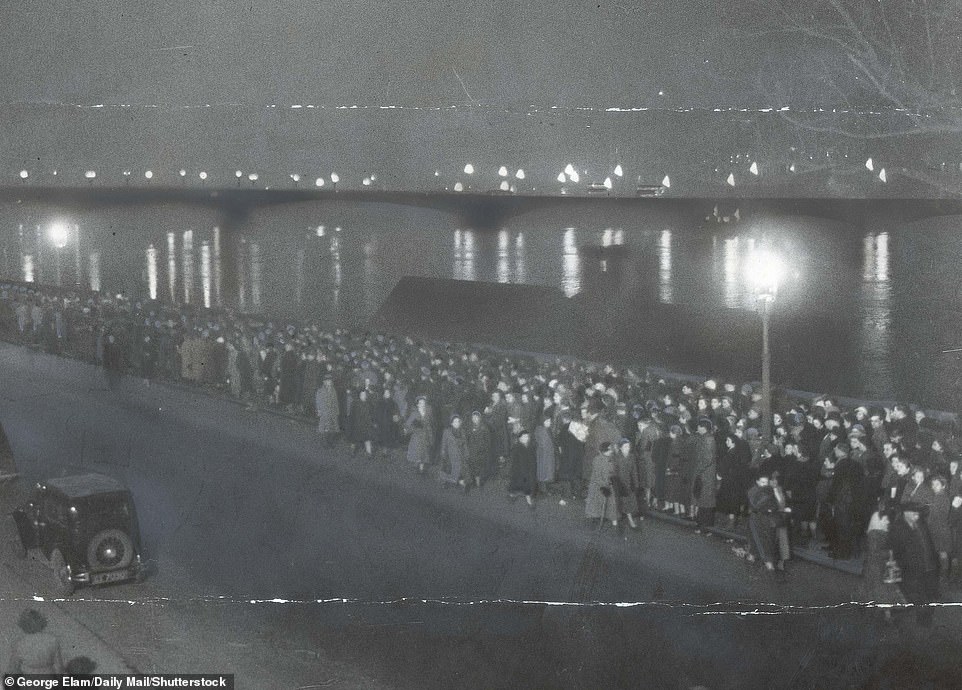 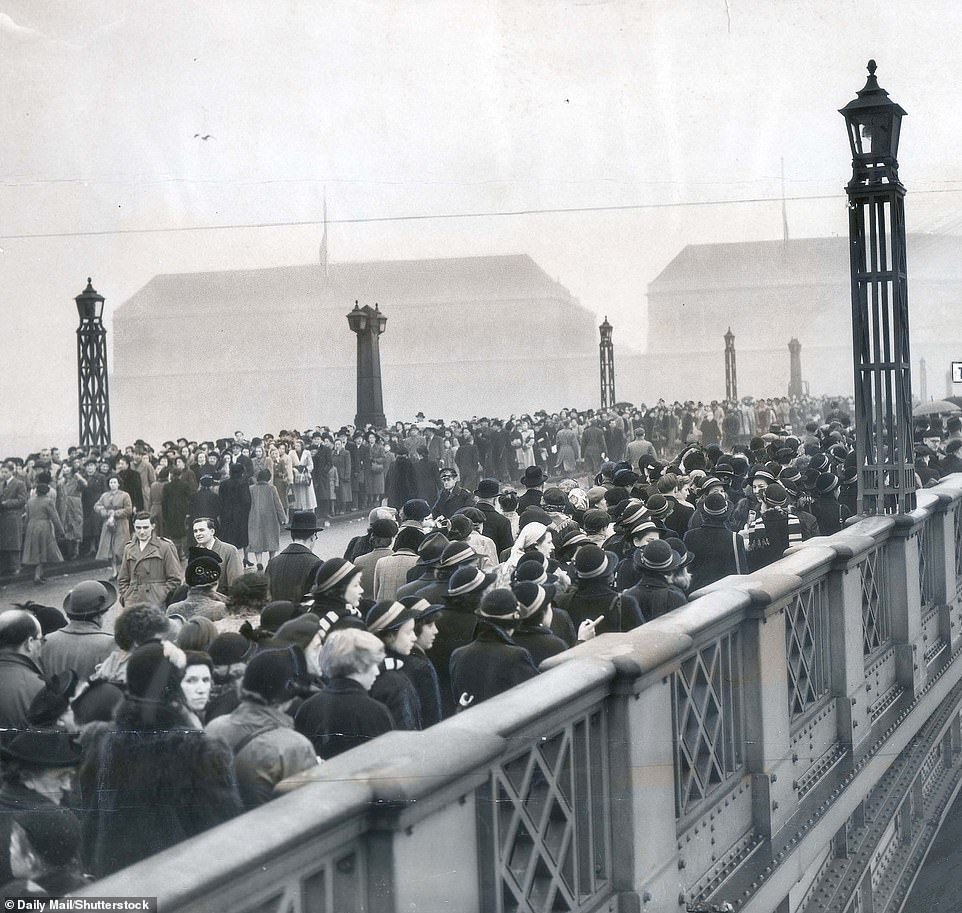 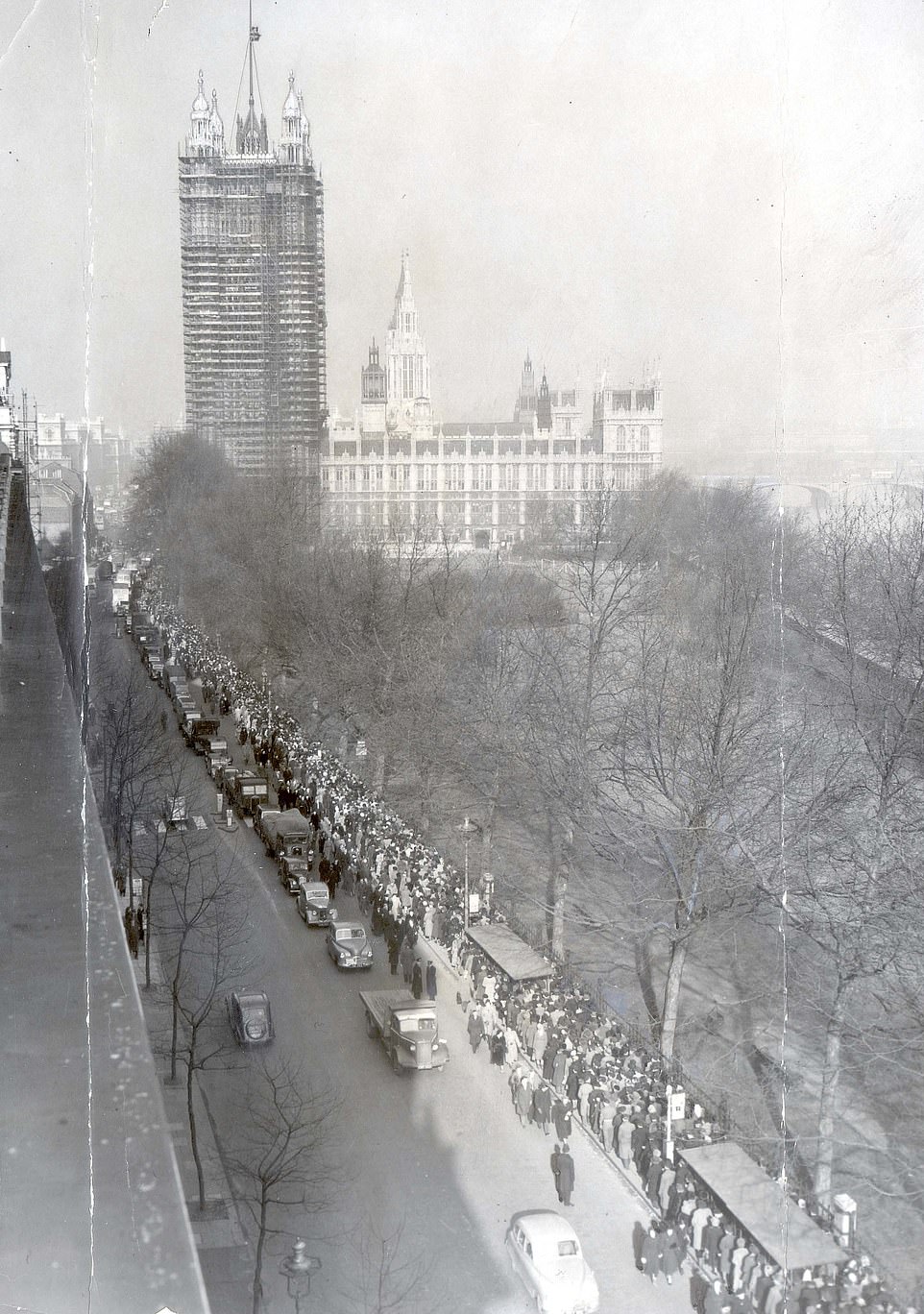 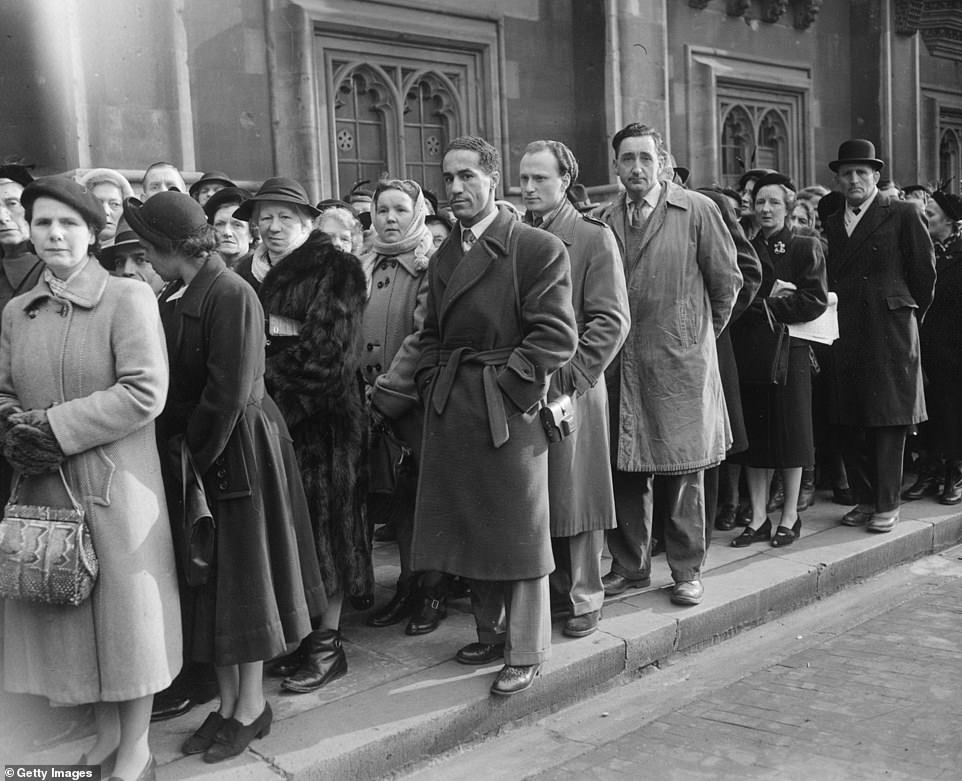 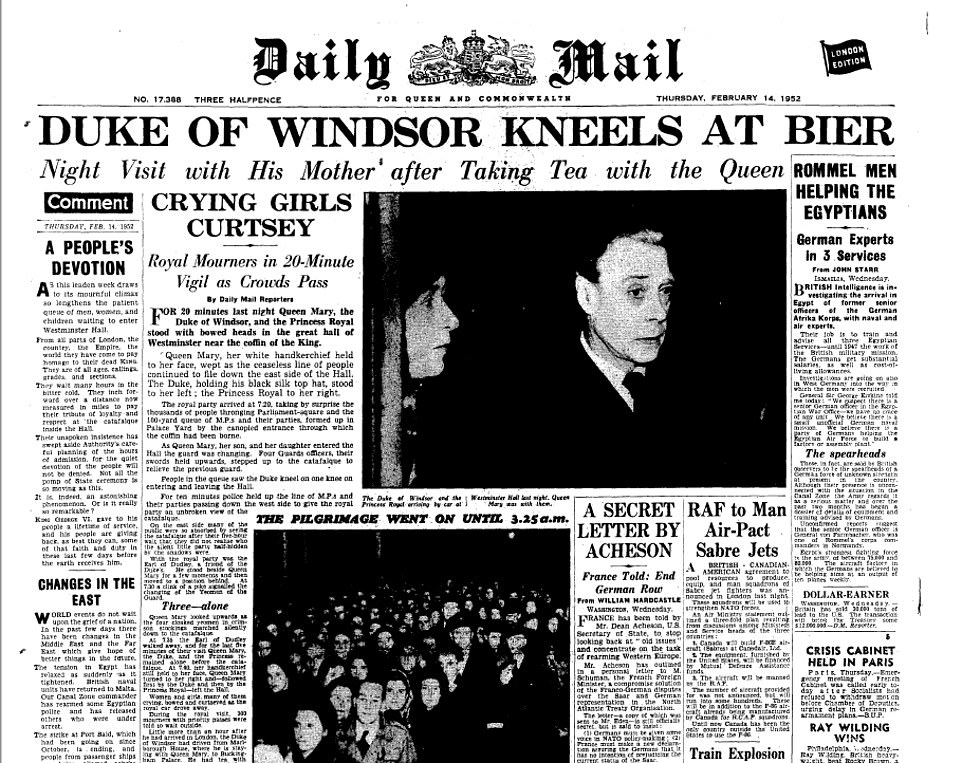 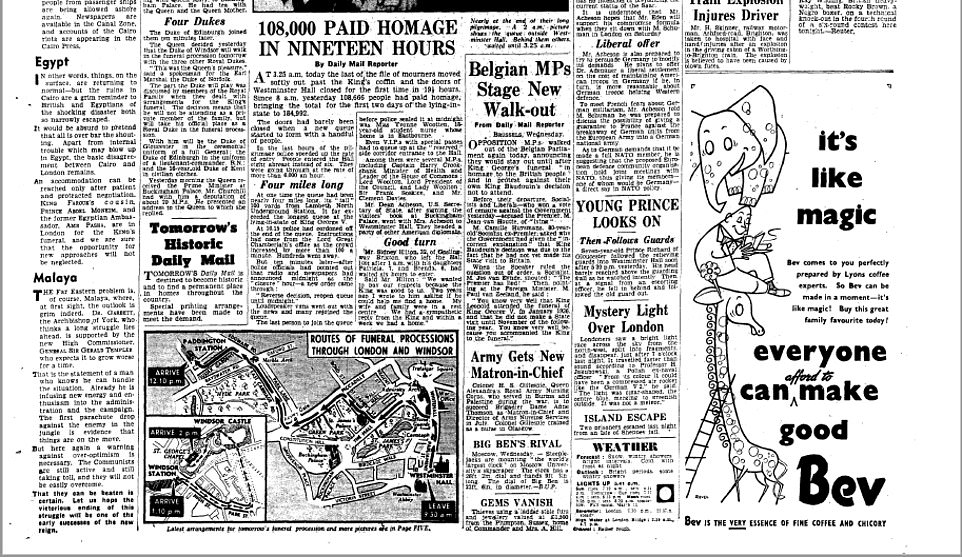 The Daily Mail’s report of the lying-in-state noted how the former King Edward VIII, the Duke of Windsor, paid his respects to his brother

BBC presenter Richard Dimbleby said during the broadcast of the Westminster Hall proceedings, said: ‘Never safer, better guarded, lay a sleeping king than this, with a golden candlelight to warm his resting place, and the muffled footsteps of his devoted subjects to keep him company.’

On the day of the funeral, February 15, George’s coffin was draped in the royal standard, with a crown, orb and sceptre lain on top.

It then made its way in a formal televised procession to Paddington Station. It was carried on a gun carriage that was hauled by Royal Navy seamen as the Queen, the Queen Mother and Princess Margaret were among those who followed. 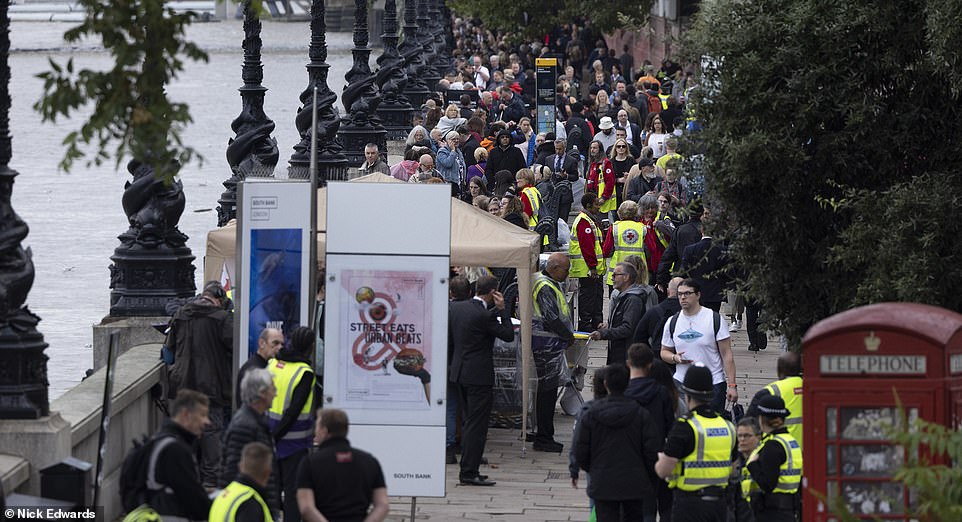 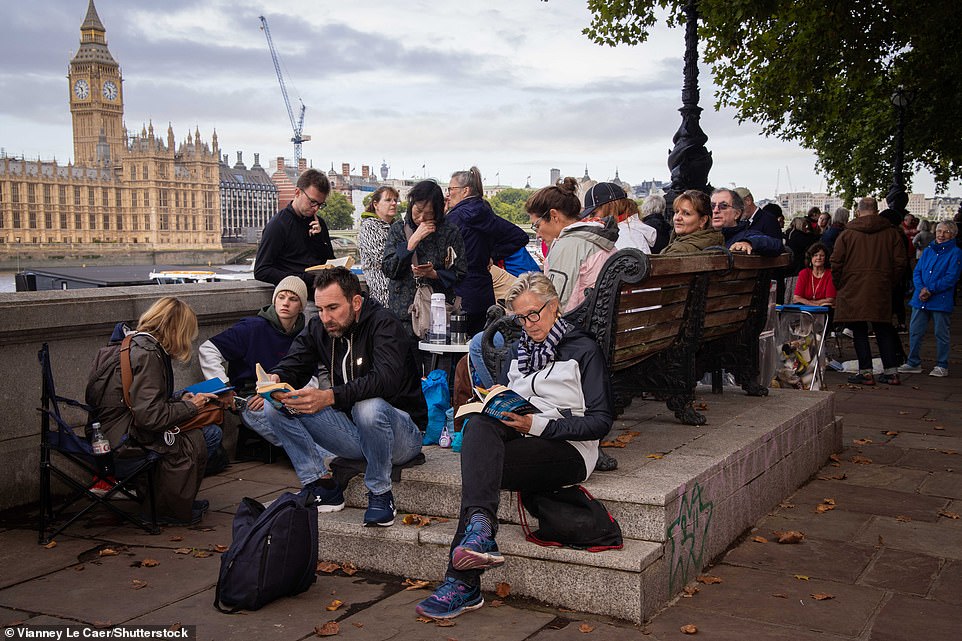 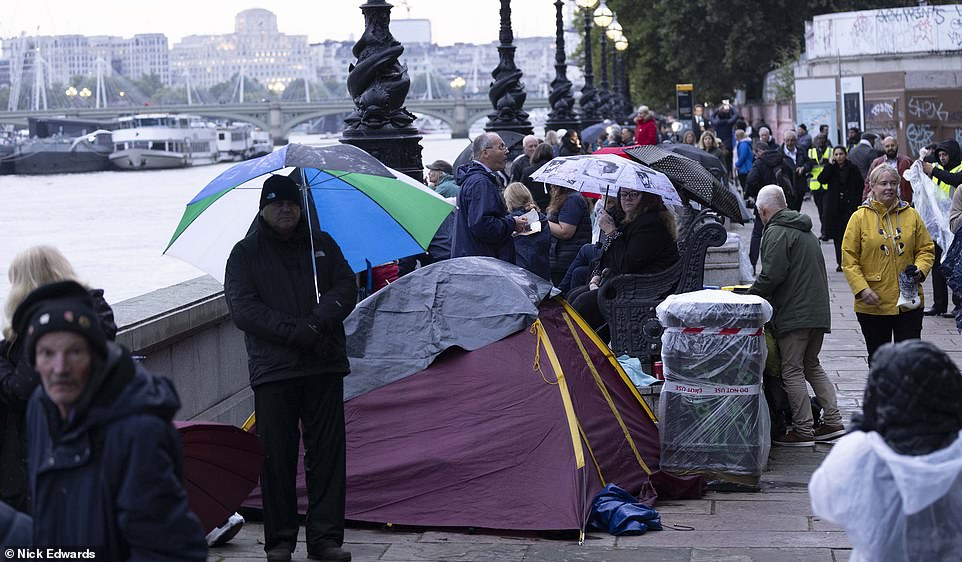 Royal fans camped out overnight and sheltered under their brollies in central London. Above: People queuing in Lambeth 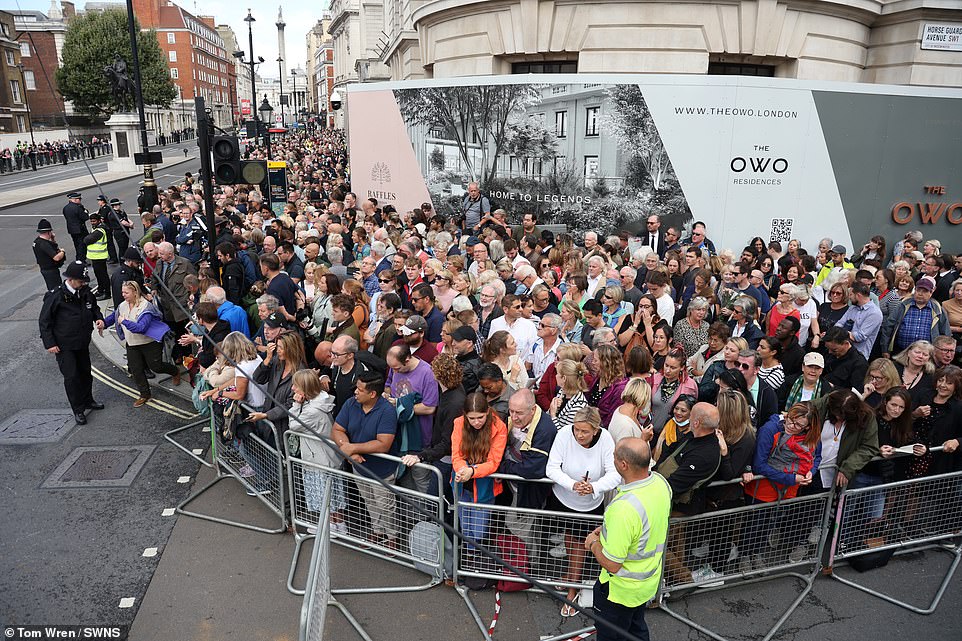 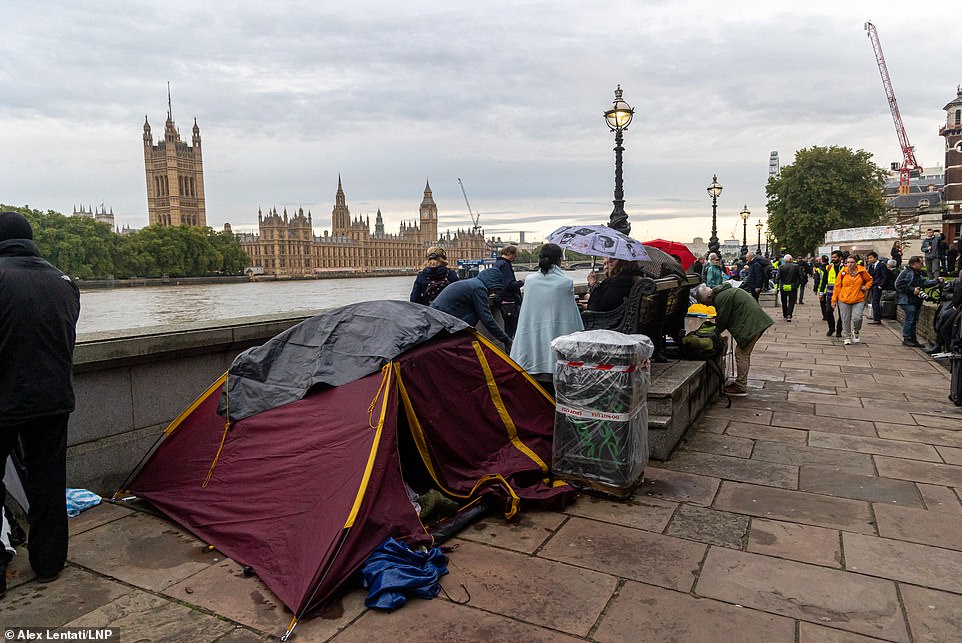 As it made it way through London, the bells of Big Ben rang out 56 times, with each chime representing a year of the late King’s life.

Once at Paddington, the coffin was taken to Windsor, where a simple service was held for the King in St George’s Chapel, where successive monarchs have been buried for centuries.

When the funeral got underway at 2pm, the nation fell silent, with even passengers on a transatlantic flight to New York rising from their seats to bow their heads.

The service, in which television cameras were banned, was presided over by the then Archbishop of Canterbury Geoffrey Fisher and the Archbishop of York Cyril Garbett.

Once the service was over, George was buried in the Royal Vault of St George’s Chapel. Elizabeth’s final tribute to her father was to drop a handful of earth that she had collected from Frogmore at Windsor on his coffin. 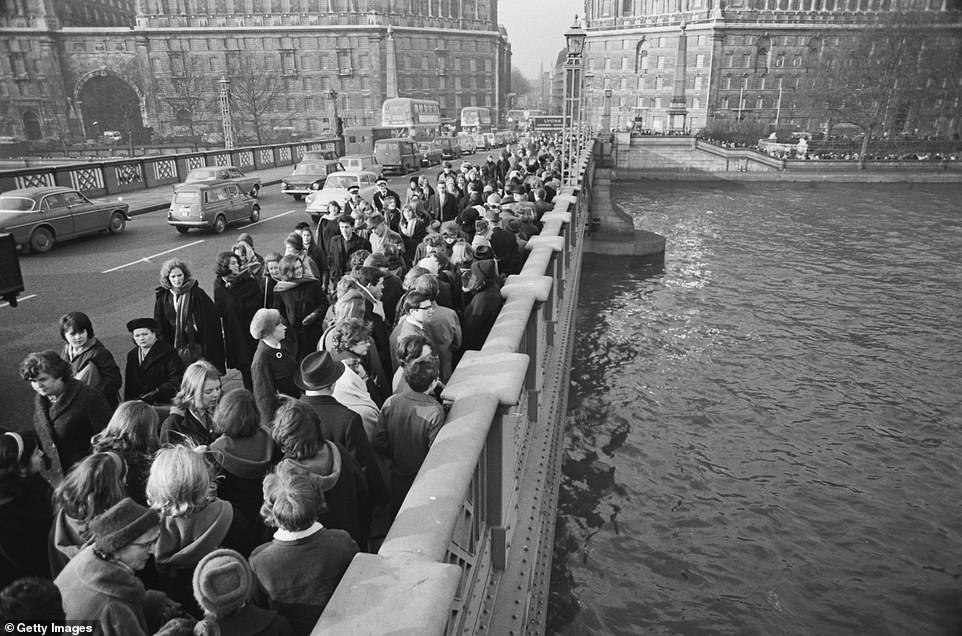 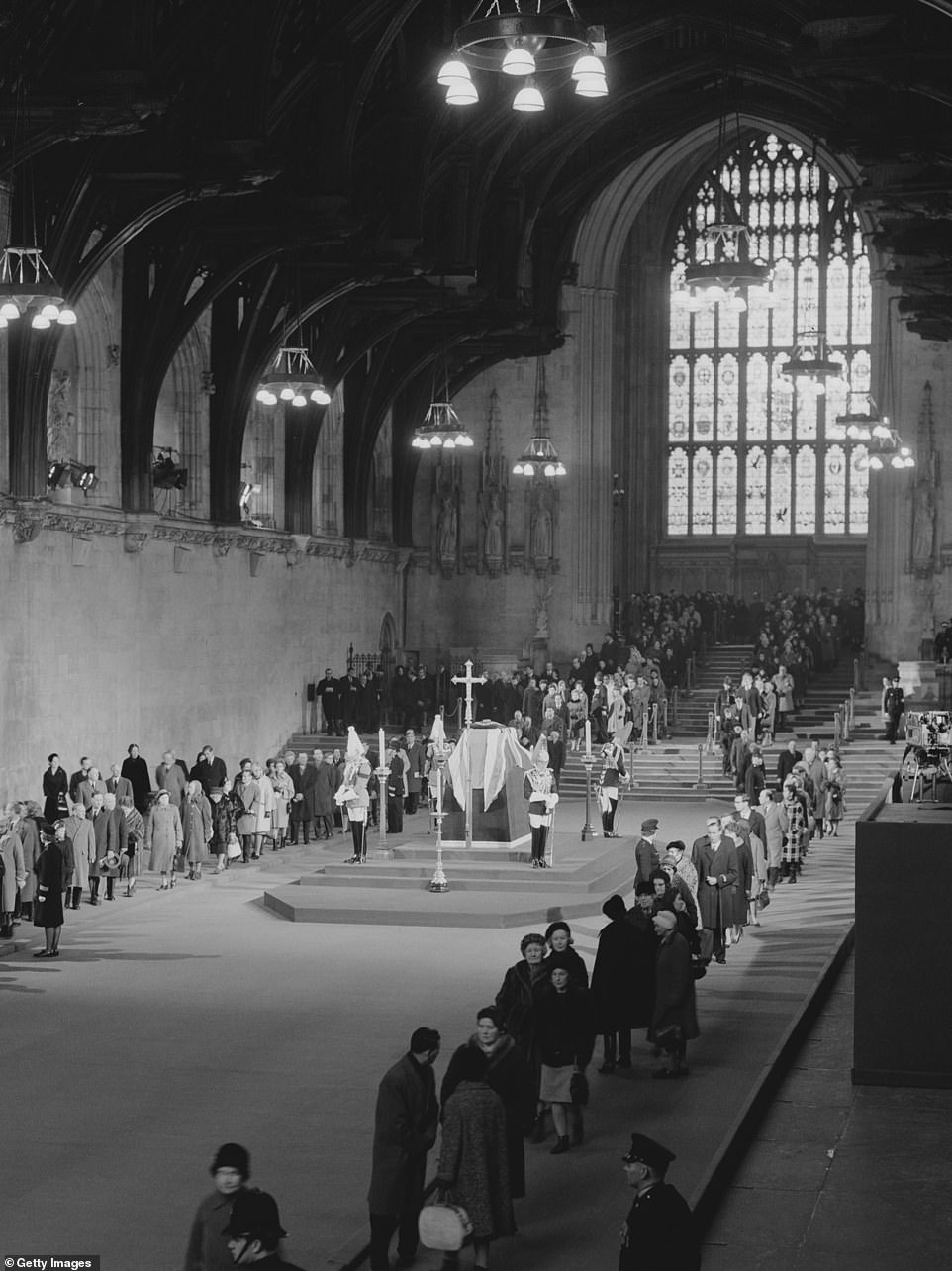 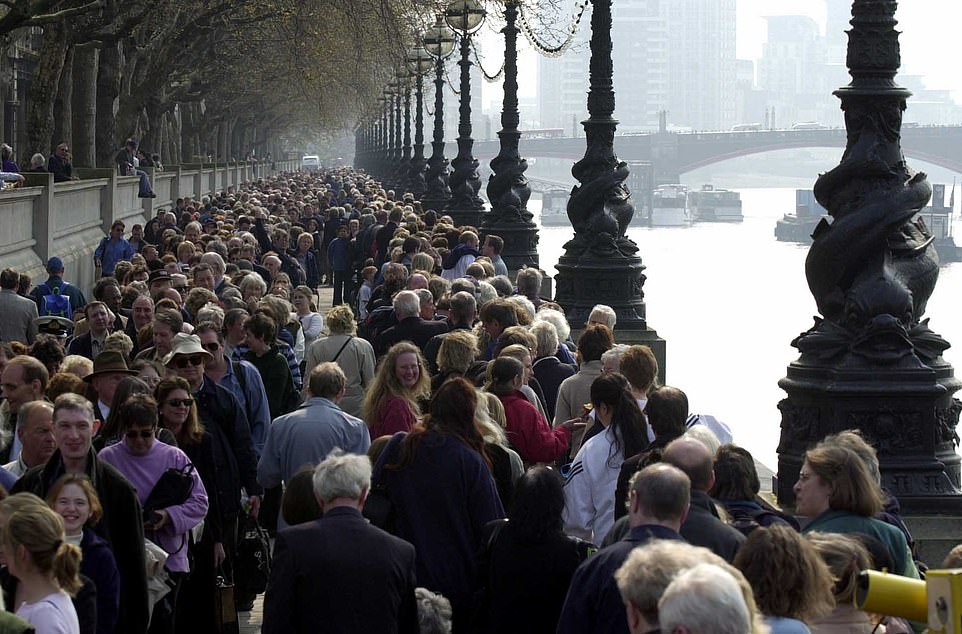 The queue to view the coffin of Queen Elizabeth, the Queen Mother, as it lay in state in Westminster Hall after her death in 2002