Huge mother spider carries hundreds of her babies on her back Creepy or cute? Huge mother spider carries hundreds of her babies on her back

For anyone with a fear of spiders this could be the creepiest crawly out there – as a mum carries hundreds of baby bugs showcasing over a thousand of their little legs.

David Higgins, 48, adored the maternal moment but believes most will struggle to see past the swarms of limbs that make it more akin to a ‘horror film’.

He shot the photographs in the Western Ghats mountain range of India after noticing an unusual ‘bump’ on the burrowing wolf spider’s back. 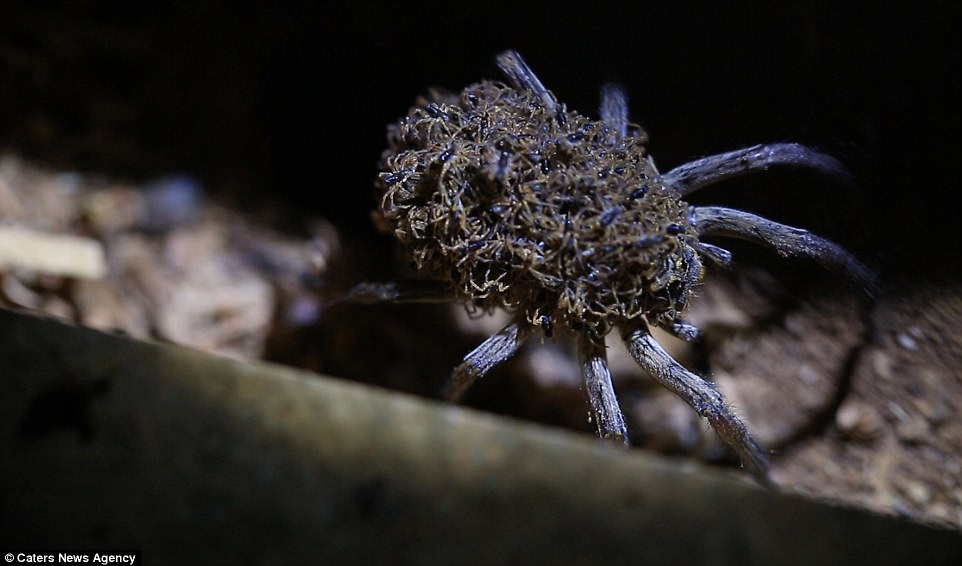 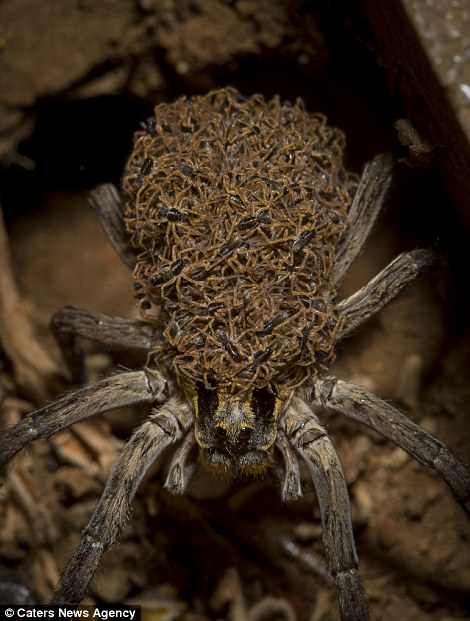 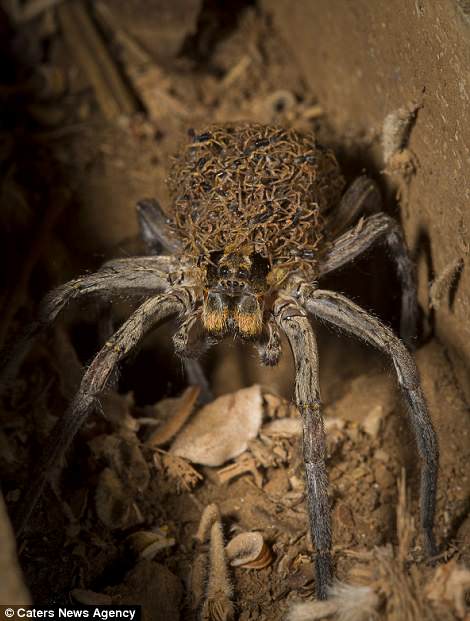 After closer inspection he realised the majestic movement was in fact her children, baring well over a thousand legs and estimates between 100 and 1,000 of the baby bugs.

The photographer from Hull, Yorkshire, spent ten hours over four days to photograph the arachnid, learning to pre-empt her movements and avoid scaring her away.

While he believes the spider could have pierced his skin with her strong jaws, she was more likely to flee from any vibrations and continue to nurture her young.

David said: ‘I think between 100 and 200, my colleague thinks over a 1000, but there’s definitely well over a thousand legs involved.

‘It should look maternal, and it is really, however it looks a little bit like a horror film from a human perspective.

‘But in its own way it’s quite heart-warming – if you can get over the creepiness – to see that animals we imagine to be cold and heartless also show the instinct, or perhaps genuine love, to care for their offspring like this. 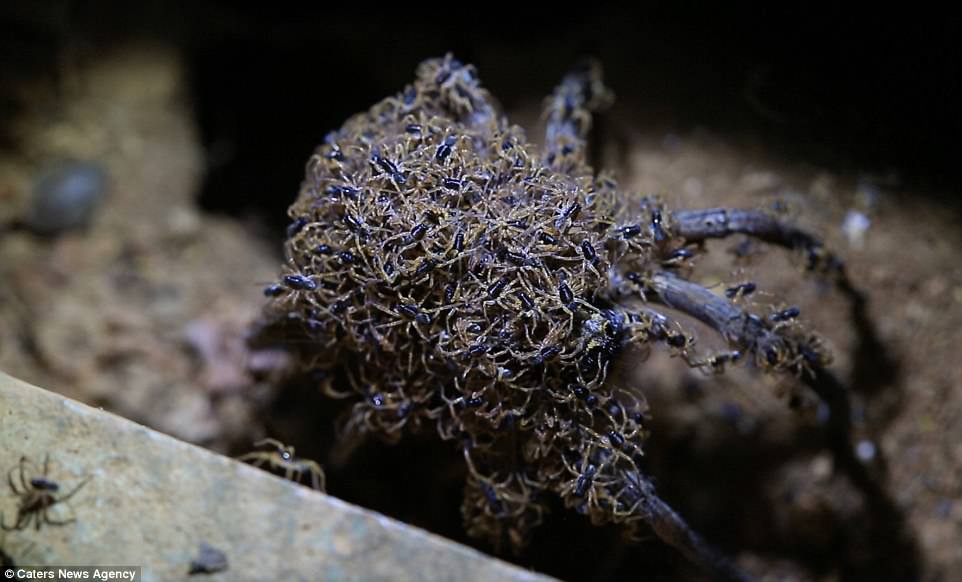 While the image of the baby spiders on their mother’s back may appear to come from a horror film, David said he was moved by the maternal display

‘I doubt I’ll win many people over with this kind of talk though.

‘I’d really like to think these photos would make people view spiders in a more sensitive light but suspect it will only add to their poor reputation.

‘But if you look passed the legs and try to see them as sentient creatures with a host of emotions that are just trying to live their lives.

‘Some people are fascinated by it, others struggle to look at the photos.

‘But everyone seems to be interested in the spider and a few people have even come with me to see her at her burrow.’

After first spotting the spider a week ago, David was determined to investigate more, camping out over night to capture moments of her fleeing the burrow.

He added: ‘I first noticed her a week ago and couldn’t work out the bulge on her back so I took a few shots and zoomed in to see thousands of clambering little legs. 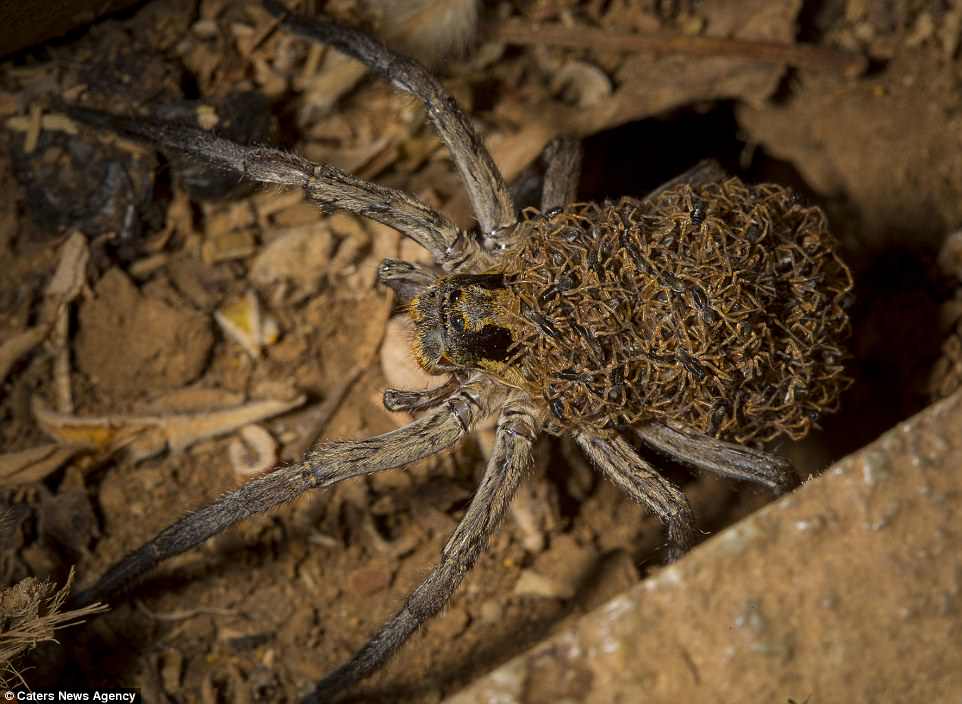 David said he camped out all night in a bid to capture the shy spider, who would scurry into her burrow at the slightest vibration 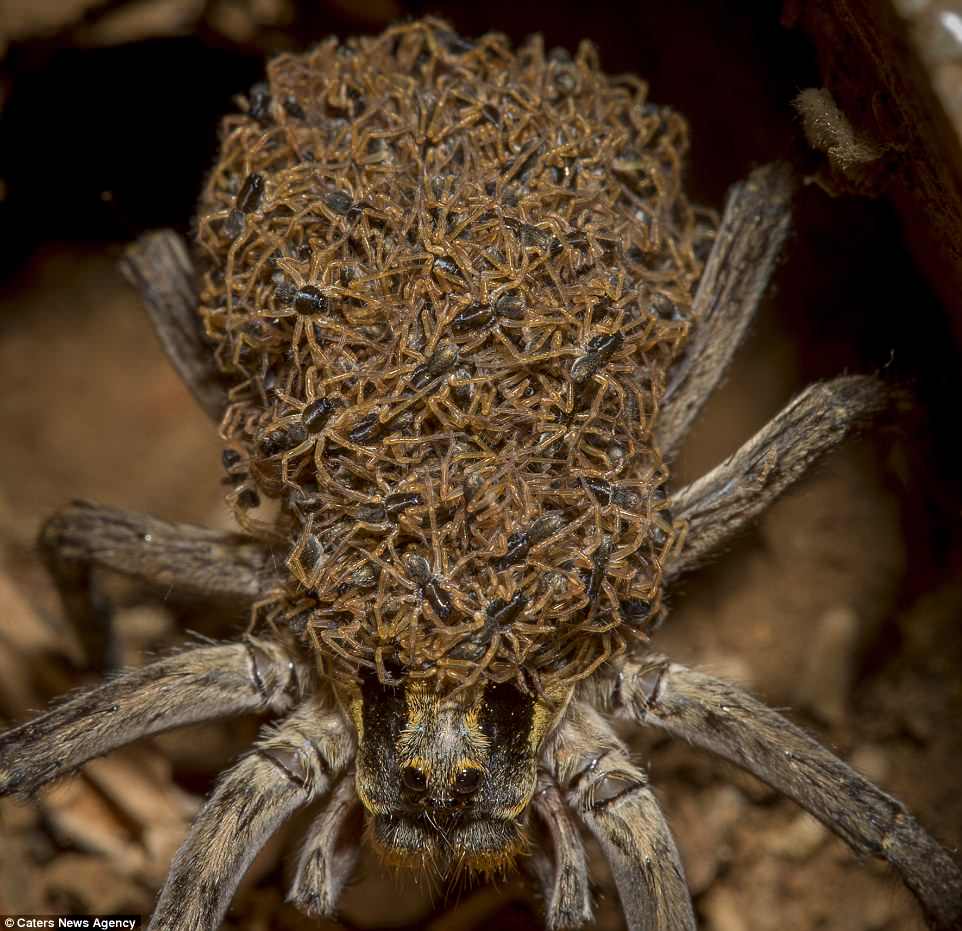 As well as spiders, scorpions also exhibit this type of behaviour with their young

‘The spider’s quite shy and keeps running into her burrow at the slightest vibration.

‘I’ve seen this spider species without young and they’re not too worried by people under normal circumstances, so her behaviour appears to be down to protecting her spiderlings.

‘I’ve spent four nights trying to get photos of her and about ten hours in total.

‘You have to be still and patient but once you understand her behaviour you can pre-empt her a little.

‘Laying down in front of her was interesting – I’m pretty sure she has jaws strong enough to penetrate human skin but I was certain her first choice would be to run back into the burrow rather than towards me to bite me…thankfully I was right.’

David hopes the pictures will encourage others to see a more sensitive and human side to bugs, instead of fearing them.

He said: ‘Arachnids often do this, many spider species look after their young by carrying them on their backs.

‘I’ve seen photos of scorpions doing this as well as spiders, but this is only the second time I’ve seen it in the wild for myself.

‘The other time was on St Helena Island in the South Atlantic.’