The human cost of fast fashion is still too high 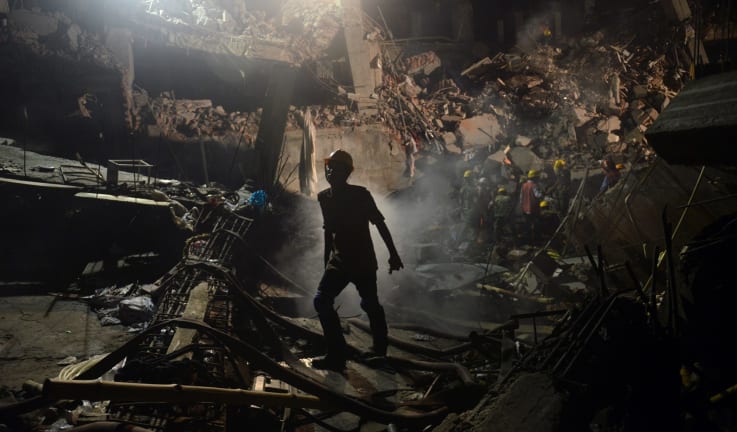 A rescue worker leaves the site where a garment factory building collapsed near Dhaka, Bangladesh.

Five years ago on Tuesday, the eight-story Rana Plaza building in Bangladesh came crashing down, burying factory workers inside. In the weeks that followed, the scale of the disaster became clear – 1134 workers, mainly young women, were dead and over 2000 others injured.

Rana Plaza is often described as the garment industry’s “worst industrial accident”, but the industry practices that led to it were far from accidental.

Western brands, including many from Australia, flocked to Bangladesh because of its rock-bottom prices. Low prices reinforced low wages and discouraged investment in factory safety.

Since the terrible event of April 24, 2013, many fashion retailers have taken steps to improve safety and working conditions in their supply chains. Many brands, including household Australian names like K-mart and Cotton On, have signed up to a union-led inspection and remediation initiative in Bangladesh that has achieved real improvements in factory safety.

These actions have led to safety improvements in around 2,300 Bangladeshi factories covering some two million workers. But there is a long way to go to ensure the workers who make the clothes we wear every day are safe.

Wages in the garment industry remain notoriously low. Forced and child labour are widespread and, in many countries, workers are still criminalised for speaking out. A report released by Oxfam Australia last year showed that for every piece of clothing sold in Australia, as little as two cents makes it back into the pockets of the workers who made it. 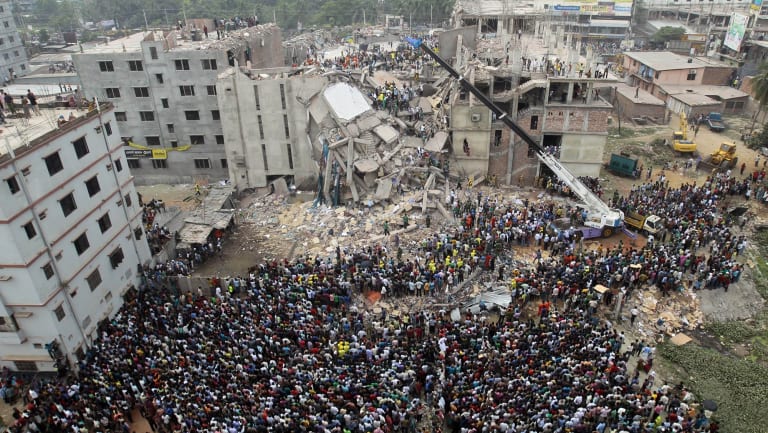 People gather as rescuers look for survivors at the site of the Rana Plaza collapse.

Forced and child labour are widespread and in many countries, workers are still criminalised for speaking out about abuses. Serious industrial accidents remain common. Just nine months ago, a boiler exploded in another Bangladeshi factory, killing 13 and injuring 50 others.

A safer fashion industry ultimately requires workers to be able to freely organise and to take complaints up the chain to retailers in places like Australia when concerns are ignored locally. Australian consumers also need to understand where their clothes are made so they can use their purchasing power to encourage ethical sourcing.

Neither of these things can happen, however, if retailers refuse to provide information on where they are sourcing their clothing from. In the aftermath of Rana Plaza, workers had to sift through the rubble searching for clothing labels to identify the companies that sourced from the factory so they could start advocating for better safety standards.

Five years on, many Australian retailers still won’t reveal the names and locations of their suppliers.

The “Modern Slavery Act”, based on the UK act of the same name, will require large Australian companies to publish annual reports on their suppliers, the risks of forced labour in their global operations and what they are doing to combat these.

It is expected to cover at least 2,000 of Australian biggest companies.

The regime has the potential to shine a light on some of the murkiest corners of the Australian fashion industry, laying the foundations for change.

Unfortunately, the government’s current proposals fall short of what would be required to make the regime truly effective. As things stand, companies will not be required to undertake additional investigations to better assess the risks of abuse. Nor will they face financial penalties if they fail to report or provide misleading information.

Without these two key ingredients, it is hard to see how the new law will compel companies currently turning a blind eye to abuses to lift their game.

In the UK, where a similar voluntary reporting regime has been in place for three years, less than 20 per cent of companies have produced statements that meet the minimum requirements and only a handful are doing anything to stamp out abuse. For many, it has clearly become just another tick-box exercise or content for their latest "ethical clothing" advertising campaign.

After Rana Plaza collapsed, it took almost three weeks to rescue all the women buried beneath the concrete slabs. Some had to cut off their own limbs with hacksaws to free themselves.

In the coming months, the final details of Australia’s transparency regime will be hammered out. The question our politicians should be asking themselves is this: will the new law help to expose serious labour abuses and prevent future tragedies of this kind? If the answer is no, the legislation needs to be rethought.

Keren Adams is a director of legal advocacy with the Human Rights Law Centre.