Hunt for suspects after deadly shooting outside synagogue in Germany Berlin: One person has been arrested in connection with a shooting that left two people dead in the eastern German city of Halle, as authorities say they are dealing with an ongoing "rampage situation".

Police said on Twitter that other assailants may still be at large after several people escaped the scene of the shooting in a car on Wednesday, local time. 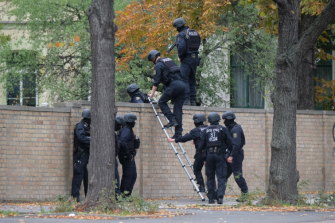 Police officers climb over a wall at the crime scene in Halle, Germany.Credit:DPA

German newspaper Bild said on its website the shooting took place in front of a synagogue. Bild reported that a hand grenade was also thrown onto a Jewish cemetery.

The shooting occurred on Yom Kippur, the holiest day of the year in Judaism when Jews fast for more than 24 hours, seeking atonement.

Shortly after the arrest was announced, a police spokeswoman confirmed that shots had been fired in the town of Landsberg, some 15 kilometres from Halle. She did not give further details.

Witnesses in Halle said one of the assailants wore combat gear and was armed with an automatic weapon.

A video broadcast by a German television station MDR appears to show a man in a helmet and an olive-coloured top firing shots. The clip shows the man getting out of a car and firing four shots from behind the vehicle.

It wasn't clear what he was shooting at.

Police say two people were killed in Halle on Wednesday but many details remain unclear.

Others said there had been an explosion in a cemetery.

"According to initial findings, two people were killed in Halle," local police said on Twitter. "There were several shots. The alleged perpetrators have fled with a vehicle. We are searching urgently and ask citizens to remain in their homes." 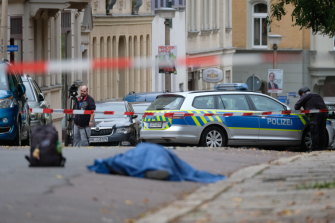 A person has been arrested after a shooting outside a synagogue in Germany.Credit:DPA

Police didn't give any further information, but said officers were out in force in the city hunting down the suspects.

A person interviewed on N-TV television said that he had been in a kebab shop when he saw a man with a helmet and military jacket, who he said fired shots into the shop.

National rail operator Deutsche Bahn said the main train station in Halle, a city of 240,000, had been closed.