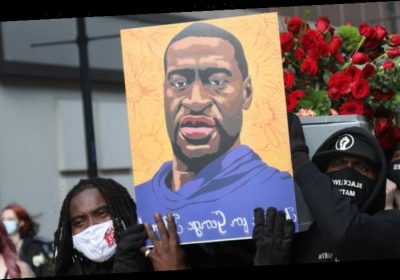 Minneapolis: The trial of the police officer accused of killing George Floyd in Minneapolis last year is set to begin on Monday (Tuesday AEDT), as a late court ruling added another charge to the indictment.

On Friday, the Minnesota Appeals Court decreed that the jury must also consider whether Derek Chauvin should be convicted of third-degree murder, which carries a maximum 25-year jail term. 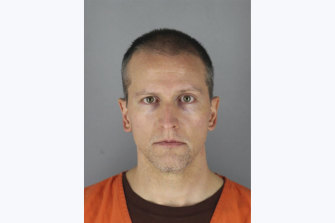 Former Minneapolis police Officer Derek Chauvin, who was arrested for the May 25 death of George Floyd, has been released.Credit:AP

Prosecutors’ decision to reinstate the third-degree murder charge was to ensure jurors had “every option” to hold Chauvin liable for Floyd’s death, said Ben Crump, a civil rights lawyer who has been advising the family.

Chauvin is one of four officers facing trial in connection with Floyd’s death. Three others are accused of aiding and abetting Chauvin.

The death of Floyd, 46, triggered protests and rioting across the US after mobile phone footage emerged showing Chauvin, a white police officer, kneeling on his neck. Floyd’s plea “I can’t breathe” was taken up by tens of thousands of protesters as a symbol of the brutality inflicted by some police officers on African-Americans. 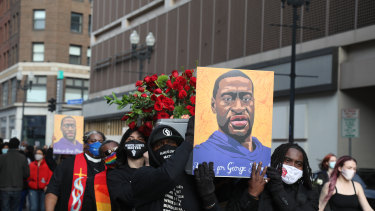 Demonstrators carry a symbolic coffin and images of George Floyd during an ‘I Can’t Breathe’ Silent March For Justice in Minneapolis, Minnesota, ahead of the trial.Credit:Bloomberg

His death became a pivotal issue in the presidential election, with Joe Biden offering condolences to his grieving family and appealing for racial justice, while Donald Trump focused on the wave of destruction which accompanied the protests.

“It’s hard not to watch the video and conclude that the prosecutors will not have any trouble with this case,” said Susan Gaertner, the former head prosecutor in neighbouring Ramsey County. “But it’s not that simple.”

Gaertner said the defence will face a challenge of trying to move the jury’s focus off of the video and the strong emotion it generates. They’ll instead try to focus on the medical evidence and Floyd’s underlying conditions while trying to portray the circumstances of the arrest as “justifiable consistent with police norms,” she said. 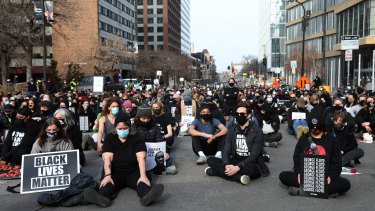 Demonstrators sit for a moment of silence during a protest in Minneapolis, Minnesota, US. Credit:Bloomberg

Just last week, the Democrat-controlled House of Representatives in Washington passed the George Floyd Justice in Policing Act, which, among other things, would ban the use of chokeholds and make it easier to ensure officers are legally accountable for misconduct.

Floyd was declared dead May 25 after Chauvin, who is white, pressed his knee against Floyd’s neck for about nine minutes, holding his position even after Floyd went limp as he was handcuffed and lying on his stomach. Floyd’s death sparked sometimes violent protests in Minneapolis and beyond, and led to a nationwide reckoning on race.

The bill, which still has to clear the Senate, was praised by Biden, who hailed what he described as a “landmark policing reform law”.

Ahead of the trial, security has been stepped up in Minneapolis, with the deployment of approximately 2000 members of the National Guard and 1100 police officers.

Offices and buildings have also been boarded up as a precaution. The heavy police presence has led to accusations that Minneapolis is being turned into a “police state” at a time when a coalition of 17 activist groups is planning to mount a peaceful protest during the trial. 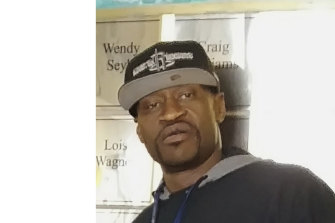 Tension rose in the city after a fatal shooting near “George Floyd Square”, a junction that serves as a memorial to Floyd, on Saturday. The circumstances surrounding the incident remain unclear.

Such is the level of security that jurors will remain anonymous, being referred to by number rather than name. It is anticipated that it could take as long as three weeks to pick a jury of 12 and four alternates.

Potential jurors have been asked to complete questionnaires detailing their age, occupation, marital status, views on the police and the Black Lives Matter movement.

They have also been asked to disclose what they read and their favourite TV news station.

Come one day before the trial is the anniversary of the pivotal day in the civil rights struggle known as Bloody Sunday.

The day became a turning point in the fight for voting rights. Footage of the beatings helped galvanise support for passage of the Voting Rights Act of 1965.

Activists called on people to continue the fight for voting rights as they also honoured giants of the civil rights movement, including the late US Representative John Lewis, who died last year.