Home » World News » ‘I don’t want one from Charles’: Letter from the Queen sent in the nick of time

‘I don’t want one from Charles’: Letter from the Queen sent in the nick of time

Klara Djachenko’s life is happy now. She lives with her daughter, her great-grandchildren play at her feet, and she has her own sunny sitting room, in which she reads about royals in gossip magazines and watches the world go by. This week, cards and flowers clutter the table to mark her 100th birthday.

On Thursday, there will be a special treat for the Ukrainian-born centenarian, to whom the Queen “felt like a little sister”; she will open one of the last letters of congratulations signed by Queen Elizabeth II before her death. It happened in the nick of time, Djachenko is not so keen on King Charles. 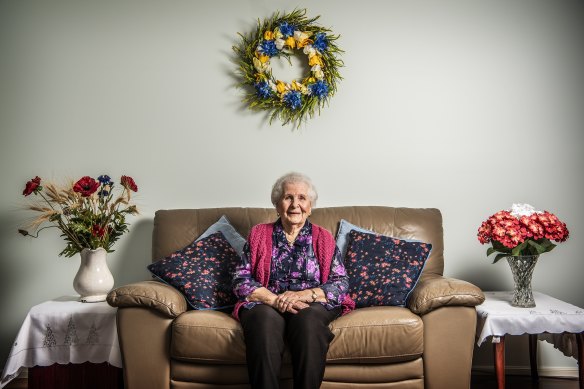 Klara Djachenko will celebrate her 100th birthday on Thursday by opening a letter from Queen Elizabeth. II.Credit:Steven Siewert

It is a peaceful twilight to a life begun in hardship and grief. Djachenko is a survivor of the Holodomor, a man-made famine in which Russia starved millions of Ukrainians, and the Nazi occupation that came a few years later, when she, and many others, were sent as forced labour to Germany.

Few witnesses remain to those dark times in her country’s history. Tears well in her eyes when she recalls the death and starvation, and she flushes with anger when talking about the modern-day war in her homeland. “Always the Russians,” she said. “Those bastards.”

Djachenko’s parents had a farm in the Donetsk region, to the country’s west. She was the eldest of six. In 1930, the state seized all property – livestock, farm machinery, all the food in every house. When her parents protested, they were arrested. Her father was sent to Siberia, where he died. 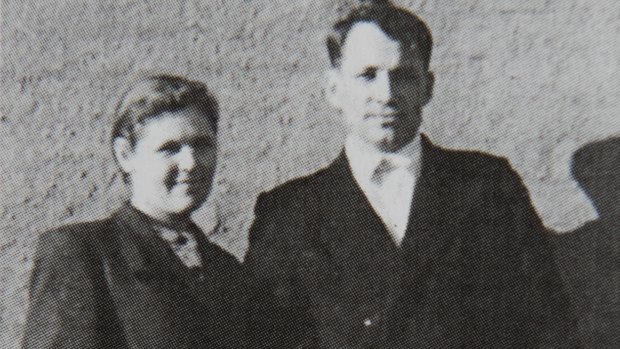 Over the next few years, the family starved. The children foraged for grasses and leaves. They cooked wild animals, including rats. Some people were so desperate, they ate their own dead relatives. “Children often went missing and never returned home,” she said.

Some of her relatives died, but Djachenko’s mother and siblings survived the famine. They replanted, and began to put their lives together again. But then came World War II and the Nazi occupation, when Germans again stole their food and sent healthy people to work camps.

Djachenko was one of them. She packed a hand-sewn cloth bag with a dress, a loaf of bread, and some cheese, and was carried away from her mother and siblings in a horse-drawn cart. She spent years first at a German work camp, where people would sometimes disappear and never be seen again, then at a displaced person’s camp. 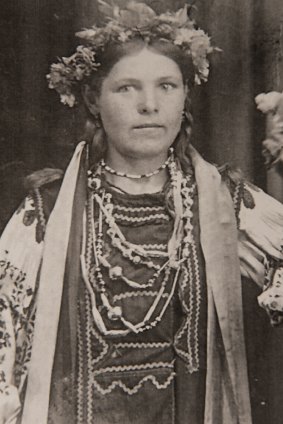 In 1943, she met her husband Ivan and married him after a week. “It was [at a] a registry, that’s all,” she said. “No ring, nothing.” She wore a borrowed scarf to cover her hair.

They had a baby, Raisa, in 1943 – the first of four – who, at 18 months, was sent to a German hospital for chicken pox and malnutrition. When Djachenko was allowed to visit, she was told the doctors had fled the advancing Soviets, and Raisa had died.

The family came to Australia as refugees, spending two years in Kalgoorlie to fulfil the conditions of the visa. She lived in a tent and washed dishes in a kitchen, but felt “so lucky. We had enough food. We were not scared anymore of Russians coming in at night and picking up someone and putting them in jail, never to come back.”

Djachenko’s life in Australia has been full and happy. She loved singing in the Ukrainian choir, and spending time at the Ukrainian club. She became a renowned gardener. “We forgot about the bad times, and made new memories,” she said. 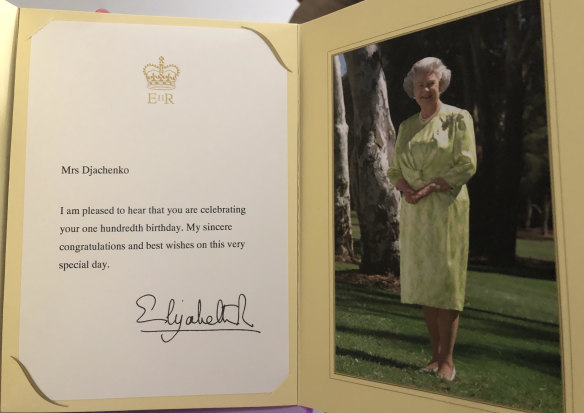 The letter from Queen Elizabeth II to Klara Djachenko.

When her thoughts turned to the past, she would sew or embroider to focus them on the present. When the Chernobyl reactor exploded, she helped knit jumps, gloves, and hats for the children.

In the past few weeks, letters of congratulations have arrived from the prime minister, the governor, and the local member. Djachenko was chuffed by a letter from Premier Dominic Perrottet. “She never expected to get one from him,” said her daughter, Helene Pisch.

The family has kept the Queen’s letter for Djachenko to open on Thursday, the day of her birthday. “She said to me that if she should ever reach 100, she’d really like a letter from the Queen,” said Pisch. “This will blow her away. She said, ‘if anything happened to the Queen, I don’t want one from Charles’.

“She’s followed [the Queen] since she arrived in Australia, she understands the difficulties she’s had. [Elizabeth] was involved in the war as well, she related to her. They were close in age. She believed she held herself well.”

Djachenko puts her good health down to exercise – she does daily laps of the yard in her walker – a life without alcohol or cigarettes, and plenty of vegetables and fruit.