Subcontractors working for a cleaning company that stands accused of bribing senior transport bureaucrats may have been “shell companies” that were headed by “dummy directors”, an anti-corruption inquiry has heard.

The architect of an alleged bribery scheme was questioned by the Independent Broad-based Anti-corruption Commission on Tuesday. IBAC had already heard evidence that cleaning company Transclean paid off the former chief executive of V/Line and a Metro Trains manager. 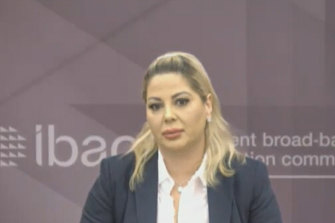 Marie Tsakopoulos appears as a witness at the IBAC Operation Esperance public hearings on Monday.

Transclean manager Marie Tsakopoulos – who oversaw the company’s up to $40 million contract with V/Line – was probed at Tuesday’s public hearings about a complex web of subcontracting arrangements within the cleaning arms of V/Line and Metro Trains.

The inquiry heard that one of Transclean’s subcontractors was in fact an employee who was caught in a tapped phone call plotting a money-laundering scheme with Ms Tsakopoulos in January 2020.

Another subcontractor was a Transclean associate, whose name was used to register a “burner” phone that Ms Tsakopoulos bought for sacked V/Line boss James Pinder.

A third Transclean subcontractor was headed by the former brother-in-law of Ms Tsakopoulos.

“These are examples, I suggest to you, of dummy directors in shell companies,” counsel assisting Paul Lawrie said.

“No, they’re not,” Ms Tsakopoulos said. “They’re there to make money.”

Commissioner Robert Redlich, QC, asked why there was “movement of money” to all the various companies that were ostensibly cleaning subcontractors on the railways.

Ms Tsakopoulos said: “They would be friends of friends who want to work and there would be a lot of them who say ‘I didn’t want to be on the books, I want to be paid through an ABN’.”

When asked by Commissioner Redlich if she was aware that Transclean’s contract with V/Line and Metro Trains specifically prohibited subcontracting, Ms Tsakopoulos said she did not know.

Earlier in the hearings, it was alleged that shortly after Mr Pinder’s arrival in Australia, in December 2016, Ms Tsakopoulos withdrew $35,000 from two accounts, before a $10,500 deposit was made into Mr Pinder’s account.

A couple of days later, Ms Tsakopoulos delivered a burner phone to Mr Pinder, which was used by him to communicate with her and Transclean boss George Haritos when Mr Pinder was the boss of Victoria’s regional rail operator, the inquiry heard. 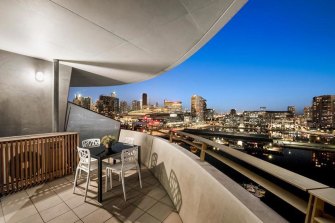 Former Transclean employee Ms Tsakopoulos received $89,000 for a deposit on this Docklands apartment.

Ms Tsakopoulos denied that the cash she withdrew was for Mr Pinder and said she guessed that it was money she was accessing to buy a diamond ring.

She denied that she bought a burner phone for Mr Pinder to evade authorities, but admitted that she started communicating with Mr Pinder over phone messaging app WhatsApp to avoid being tapped.

“We’re going to take other avenues for you guys not to listen to our personal conversations,” Ms Tsakopoulos said to IBAC.

“You’re a facilitator for George Haritos. When he needs things to happen or payments to be made or phones delivered, you’re the person who facilitates it.”

“That’s incorrect,” Ms Tsakopoulos said. “I’m my own person and he is his own person.”

It comes a day after Ms Tsakopoulos was heard orchestrating a money-laundering scheme and claiming Mr Haritos had laundered $40 million in tapped phone conversations played to the inquiry.

The money was used as the deposit of his $2.5 million home.