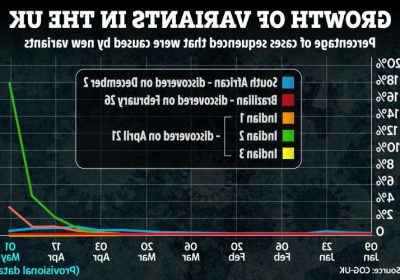 THE INDIAN Covid variants are spreading rapidly in parts of the UK and are the cause of around one in 20 new cases, data shows.

Experts have said the rise of the strain may be “masked” by broadly decreasing infection rates. 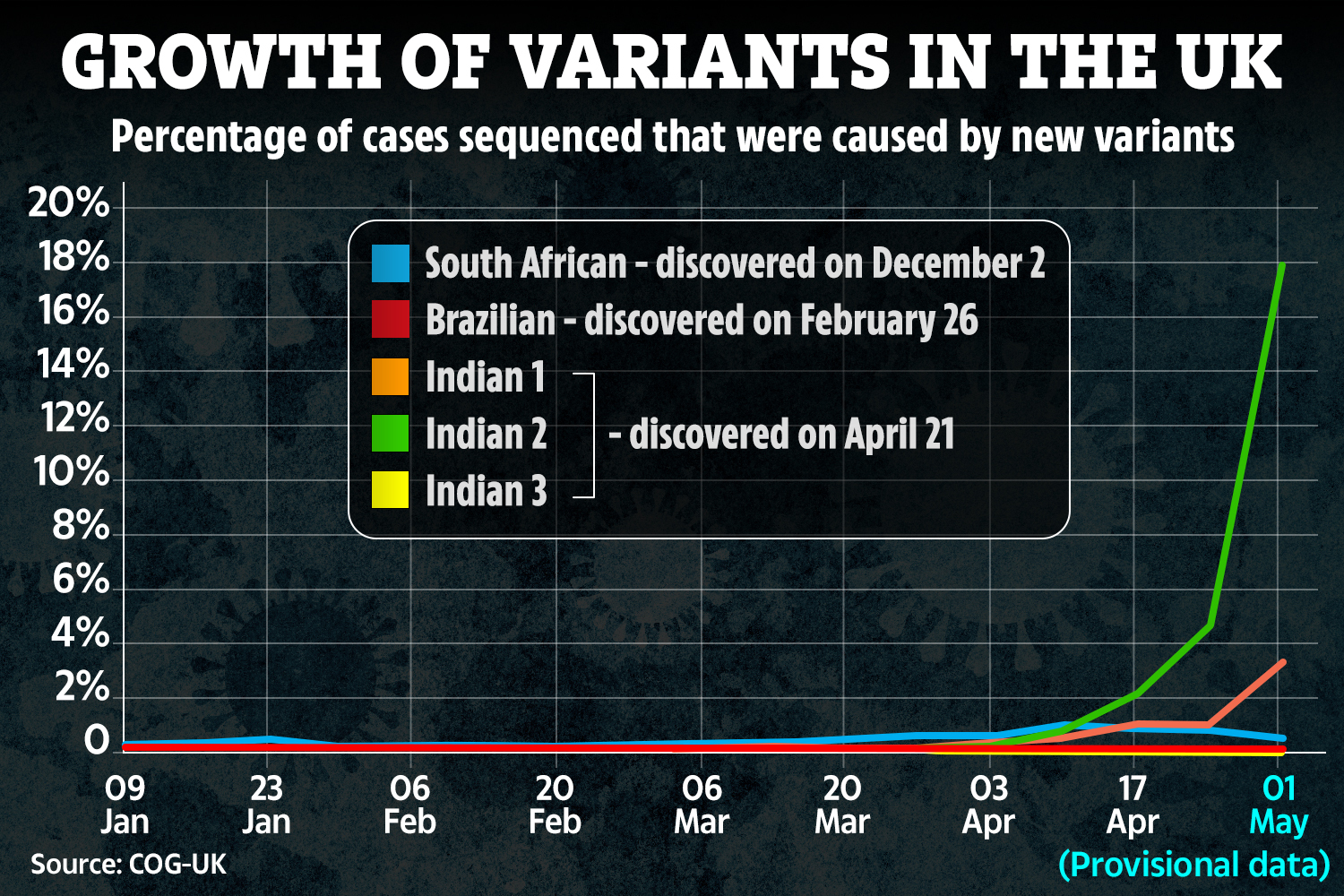 It is mostly centred in the South and East of England. In London, the variant is feared to be at the source of 10 per cent of cases.

The “worst case” scenario would be that it becomes dominant in unvaccinated people, causing a surge in cases.

If vaccines are not as effective against the strain, it could cause problems for those with the jab, too. But the evidence so far suggests this won’t happen.

Only the former two appear to be spreading at the moment and together make up at least 400 identified cases.

The Indian variants have a number of mutations that make them different to the original coronavirus strain.

But how this impacts on the virus’s behaviour, including whether it makes it more transmissible or able to escape immunity, is not clear yet.

5% of cases and growing

Scientists use a process called genetic sequencing to find out the proportion of cases caused by each of the variants in circulation.

They only do this on a fraction of the positive Covid swabs in the UK.

Different data sets show a changing picture of how the Indian variants are increasing, but each show a concerning growth.

Public Health England data until April 22 revealed five per cent of new cases were caused by the Indian variants.

This compared with 3.1 per cent the previous week, according to Prof Paul Hunter, of the Norwich Medical School, University of East Anglia.

He told the Sun while the fraction of cases itself are not a worry, “what is worrying is the direction of travel, and those data are already a couple of weeks out of date”.

“I think the data on the Indian variants is looking very worrying at the moment”, he said.

What Indian variants are in the UK

The first to be detected, with cases confirmed on April 15. Infections stood at 193 on April 21 so are likely to be higher now.

Announced on April 30, this variant has been the cause of at least 202 cases.

This strain was also announced on April 30. It has not been seen more than five times.

Data from the Sanger institute up until April 17 reveals a similar pattern.

Prof Christina Pagel, a mathematician and professor of operational research at University College London, said the Indian variant B.1.617 was the cause of four per cent of cases in England.

This excludes data from travellers and those who were involved in surge testing schemes and therefore is an “approximately random sample of positive tests in the community".

More recent data from COG-UK suggests 18 per cent of cases in the UK in the week ending May 1 were caused by the Indian variant B.1.617.1.

But these figures are only provisional, Prof Hunter stressed. It’s based on sequencing of only 460 cases compared to 5,500 the week prior.

Prof Pagel commented on Twitter: “Looking at each variant as a proportion of all sequenced cases the rapid rise of B.1.617 ("India") is crystal clear.

“YES, overall London numbers have dropped A LOT since Feb & there is no indication (yet) that they are rising.

“BUT we've seen rising variants masked by overall case drop / plateau before all over the world… and that this has caused complacency as everything looks fine, until, one day, it's not as new variants gain dominance.” 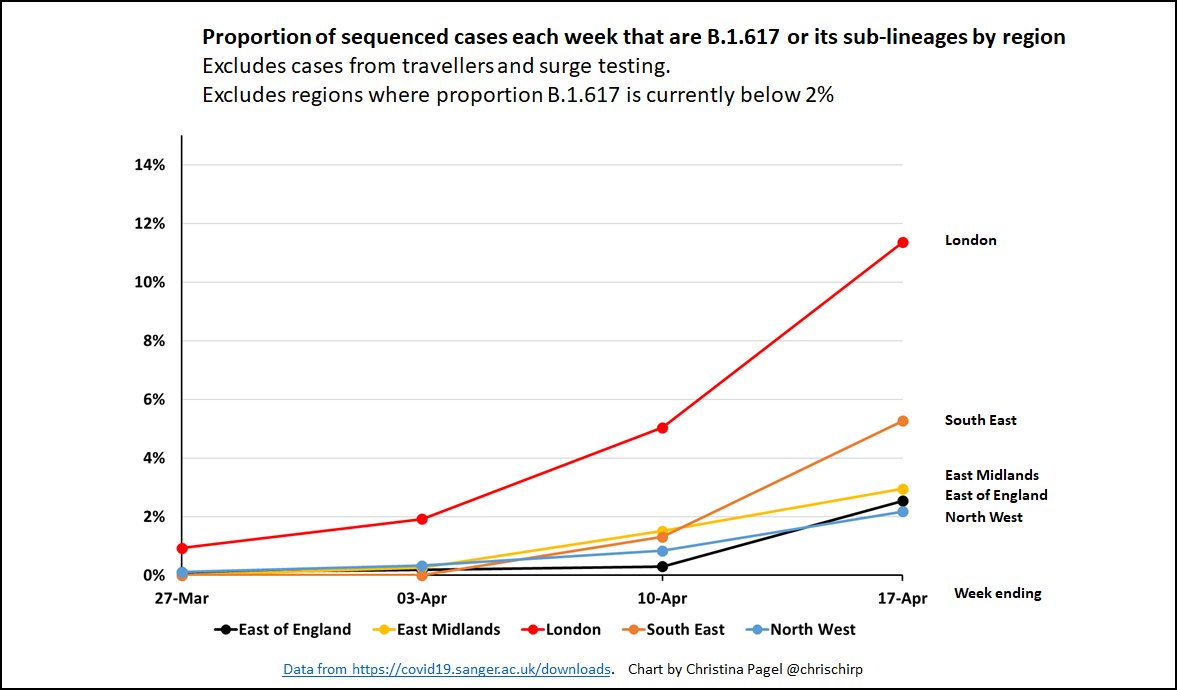 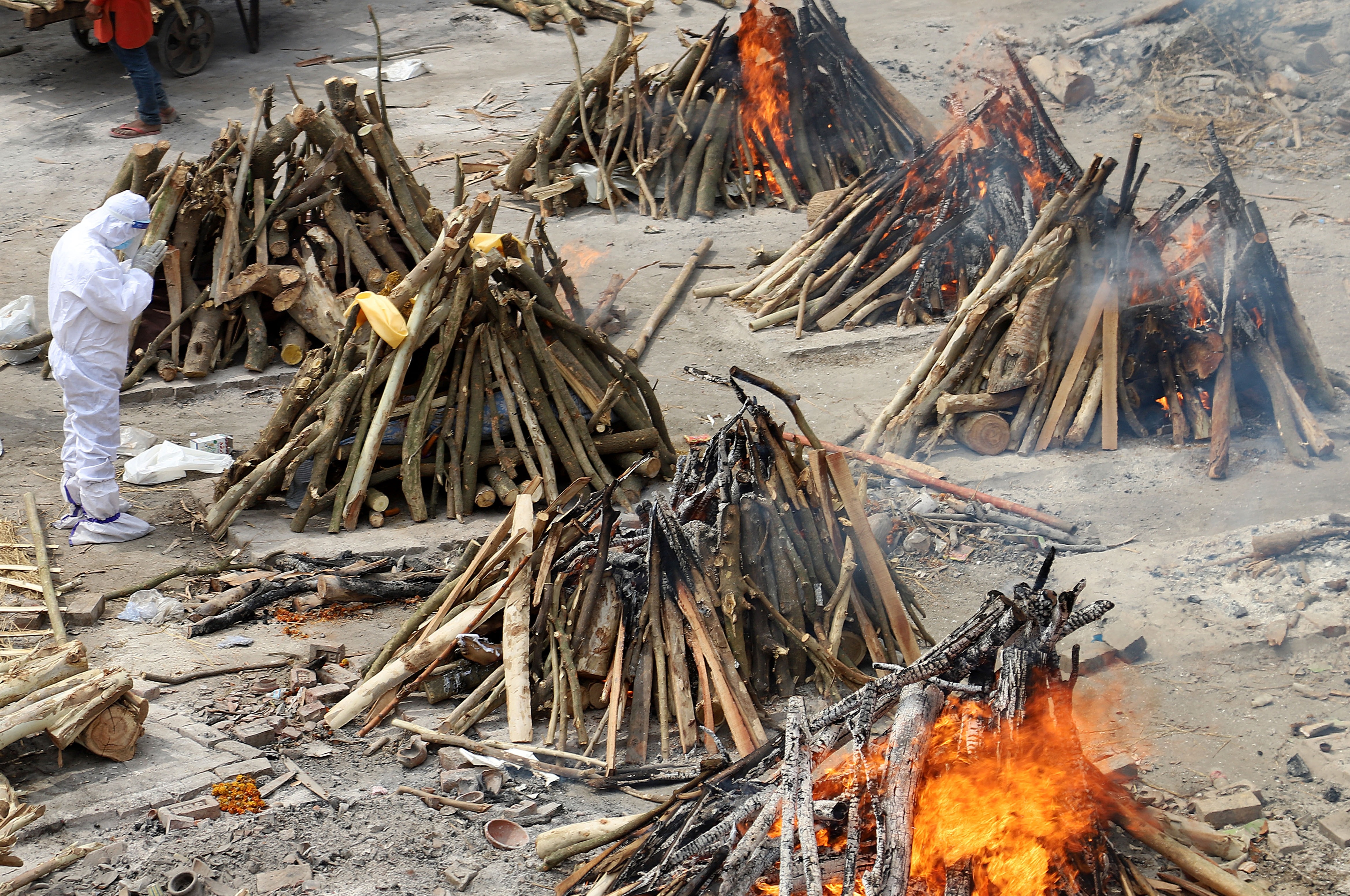 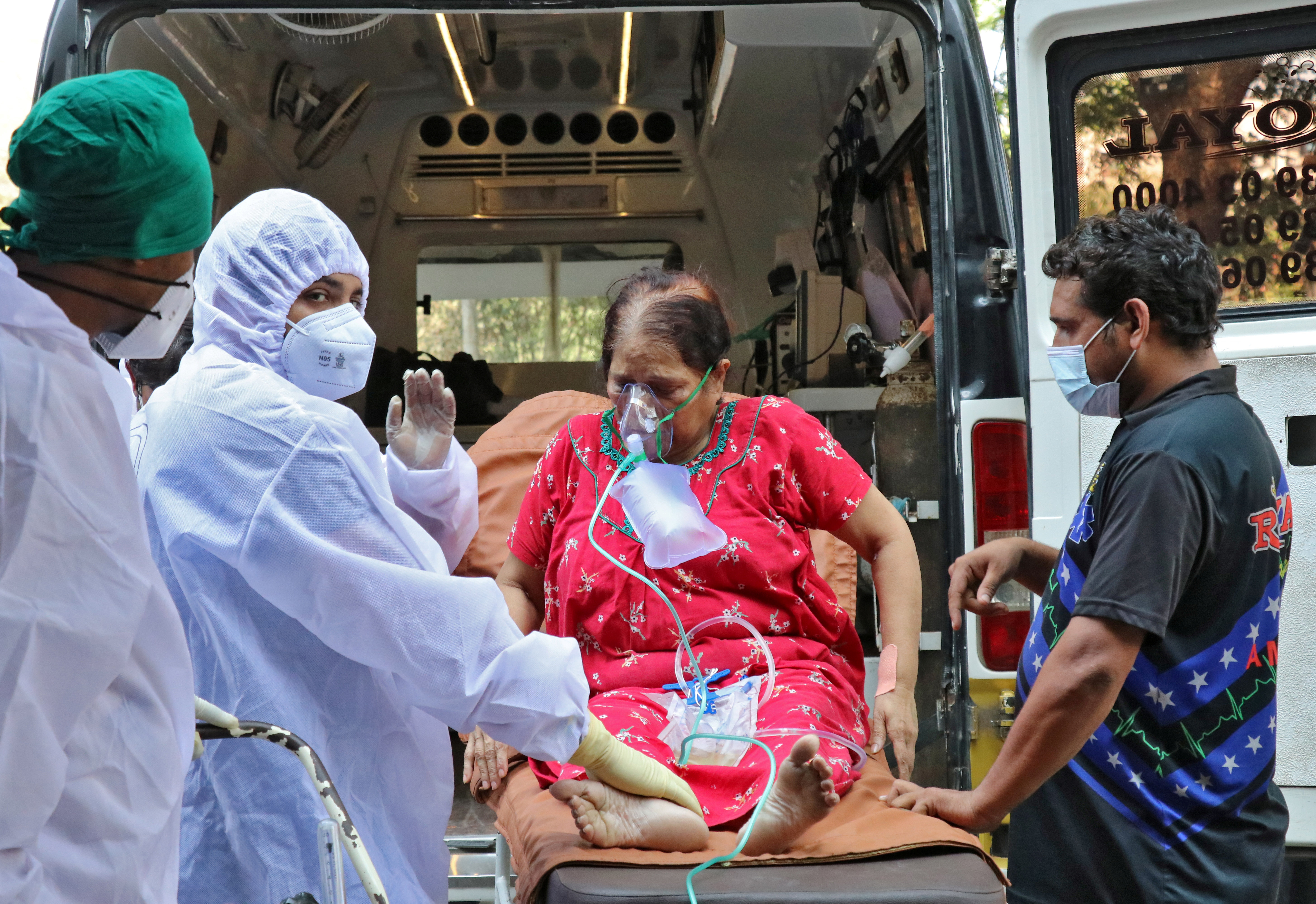 Prof Pagel said this was evident with the Kent variant, which grew in huge numbers over the November lockdown in the South East of England.

It quickly became the most dominant strain in the UK before reaching all corners of the globe within a matter of months.

Prof Pagel said the “worst case” scenario is that the Indian variant becomes dominant in London and causes a surge in cases in unvaccinated people.

Even worse still is if vaccines do not protect people against it, but Prof Pagel stressed this is unlikely and “our vaccines should work against it”.

"But this rapid spread in the UK is occurring at a time when we are still in a reasonably tight lockdown and over 50 per cent of us have had at least one dose of the vaccine. So my optimism is taking another bashing."

It comes after a study suggested that the mutations of the Indian variant will not make it able to dodge the immunity built after vaccination.

A team at University of Cambridge took blood samples from people who had had a Pfizer vaccine dose.

They tested it against new variants in the lab and found that antibodies were ten-fold lower against the South African and Brazilian strains.

The Indian variant has a similar mutation called E484Q, which only showed a six-fold loss in antibodies. It’s second mutation, L452, has only a four-fold loss.

Ravi Gupta, a professor of clinical microbiology at the University of Cambridge, said: “The combination of the two mutations gives a value of 4, in other words the two mutations DO NOT confer substantial antibody evasion.”

But he said there is still evidence B.1.617 may spread faster.