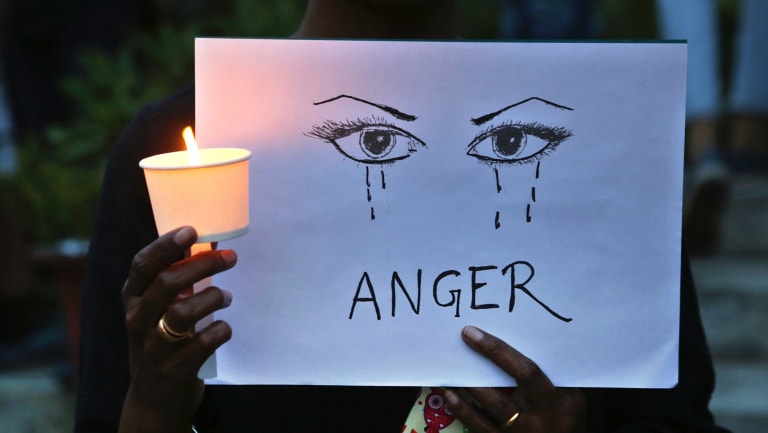 A woman holds a candle and placard seeking an end to sexual violence against women in Bangalore, India.

Recent accounts of the rising rape rate in the subcontinent are chilling. For me, born and raised there, they are profoundly distressing.

India is one of my favourite places on earth. When I step off the plane onto Indian soil there is a deep, joyous, visceral sense of homecoming that I don’t experience anywhere else, not even in Australia, where I have lived for most of my life, and where almost all my loved ones are.

My childhood in India was mainly an abundantly happy one. The generosity of people – sometimes the poorest people, was humbling. We had great friends. The sights, sounds and smells, the ancient buildings, the food, the colour and vivacity in the streets were magical. When we moved to the eastern suburbs of Melbourne in the early 1970s, I thought it was the dullest, greyest, most lifeless place imaginable.

But. Even as a child, I was aware of India’s dark side. In 1969, when I was 10, our home city of Ahmedabad was riven by communal conflict. Muslims and Hindus slaughtered each other in the street: many hundreds of people were murdered in a few days. It wasn’t until the army imposed a 24-hour curfew and shot anyone who broke it that the carnage ceased. Of course, the hatred, fear and mistrust went on for decades.

A few years earlier, my mother and I were on a long train trip that took us through an area torn apart by language riots – people in the south protesting against the imposition of Hindi – the lingua franca of the north – as the national language. The train we were travelling in was stoned by rioting mobs.

And everywhere you look in India, poverty and disability are displayed. The homeless, the hungry, the breathtakingly disfigured, are all paraded in the street. The animals you see are often bone thin and cowed. For a dog lover, India is purgatory.

Currently, Islam and Christianity are the most criticised of world faiths, with militant extremism and child abuse prominent in our awareness. But every religion and ideology on earth has its dark side – has practitioners who distort or ignore its teachings in horrific ways. Mahatma Gandhi abhorred the caste system. Any belief or system – sexism, nationalism, racism or caste, that posits that some people are worth more than others, is twisted. Good beliefs, healthy religions are the ones that grow our hearts, rendering us more compassionate and sharpening our awareness of injustice towards those outside our circle.

Clare Boyd-Macrae is an Age columnist.