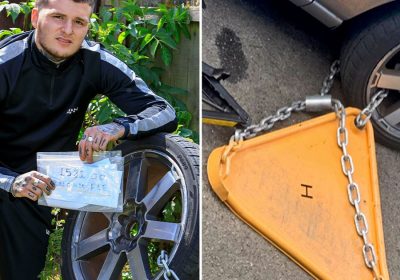 A canny mechanic whipped the wheel clamp off his motor and is now holding it to ransom until he is paid £581.

Conor Seaborn works as an aircraft mechanic so removing a clamp was child's play and now he has chained it to a post.

The single dad from Colchester, Essex found his Ford Mondeo had been targeted by a collection agency chasing £581 he was said to owe.

But the clamp had not been put on securely so Conor, 23, went to work with his tools.

He has now chained it to a post in his garden and is charging the clampers the same fee he is said to owe to get it back.

He told The Sun : “What they are doing is completely wrong.

“The powers these people have to charge whatever they want is exploitative.”

He originally picked up the £75 ticket in a county council-owned car park while shopping. But says he lost the ticket details and the charges kept rising.

He claims the clamping was illegitimate and that Bristow & Sutor, the collection agency, is hard to reach.

Back in March Brighton and Hove City Council issued a warning after a man became a victim of a scam at a pay and display.

It happened when the scammer asked the man to pay for a ticket as he claimed he didn't understand how to do it himself.

The man was then unable to get his card back out of the machine as it had been swallowed.

The conman claimed to call the engineer to come and release the card but this was part of the hustle.

It wasn't until later the man realised he had lost £1,500 from his accounts.

"I was naive enough to use my second card and the same thing happened to that as well," he said.