The 18th century Swiss villa where Biden and Putin will hold talks for 5 HOURS tomorrow: Inside the lakefront property where the US president will push his ‘worthy adversary’ on cyber attacks, Ukraine, election meddling and Alexei Navalny

When President Joe Biden meets Vladimir Putin for a ‘straightforward’ conversation with his ‘worthy adversary,’ the two men will sit down for their summit meeting inside an ornate 18th century villa on the bank of Lake Geneva in Switzerland.

The two men are set to meet in Geneva at the Villa de la Grange, a building with a long history that is located near the luxury hotel where Biden is staying. With its stocked Empire bookcases, trompe d’oeil ceiling details, and colorful rose garden, the building and grounds offers bountiful opportunities for photo-ops and small talk.

Biden and Putin have met before, although the conversations haven’t always gone smoothly. Biden claims he once told Putin he had ‘no soul.’ Putin, in a recent interview when asked about Biden, went on about Donald Trump’s persona, then called Biden a career politician. But Biden put his best foot forward at a press conference Monday in Brussels when he declined to call Putin a ‘killer.’

By selecting a well-appointed Geneva villa for the summit, diplomats were taking a page from the 1985 summit between Ronald Reagan and Michael Gorbachev, where a photograph of the two men before a fireplace set the tone for serious arms control talks that would follow. 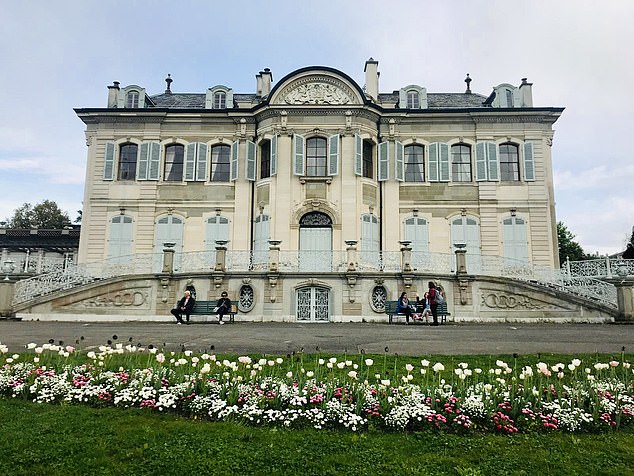 The Reagan and Gorbachev summits set a framework for how powerful adversaries can find set aside areas for negotiation and agreement even amid larger disputes.

‘The optics are nice. You can’t really picture the two of them meeting in like a sauna or a Burger King,’ said Matthew Rojansky, director of the Wilson Center’s Kennan Institute in Washington.

‘Usually villas come with grounds. That gives you a security perimeter. They’re often on the water,’ he added. ‘And they have enough rooms in them that you’ve got staff nearby at your beck and call. So that’s usually why it’s in a villa.’

The two men are expected to meet for four to five hours, Bloomberg reported, with aides saying they will meet in a smaller as well as an expanded meeting with staff.

As the host city, Swiss authorities are providing the neutral venue. They also have brought in an anti-aircraft gun, installed concertina wire, and taken other precautions around the city for the summit.

The meeting is tacked onto an eight-day trip where Biden has been soliciting advice from allied leaders on how to contend with Putin.

Both men taking part in the summit have the taste for the good life, although Biden’s relatively humble $3 million Delaware beach house and classic Corvette Sting Ray might not meet Putin’s standards. Jailed Russian opposition leader Alexei Navalny claims Putin is the owner of a $1 billion Black Sea palace that was built for him. The Kremlin denies it.

The Swiss villa was built between 1768 and 1773 by a prominent Lullin family, but banker Jean Lullin had to part with it after his finances took a turn for the worse after the Geneva Revolution – a push to extend the franchise that was put down by armed troops. He sold it to an industrialist born in Marseille, who like succeeding owners made changes and additions, before it ultimately ended up in the hands of the city of Geneva, according to information on the villa provide by the city. 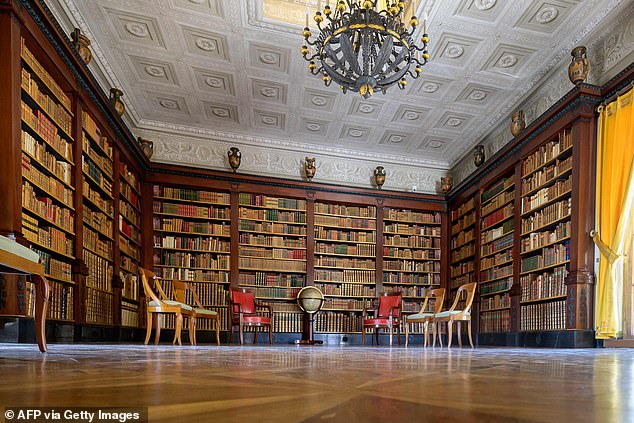 Study time: Biden has been meeting with Russia experts and refining his talking points with key staff. The Villa La Grange library displays some of the14,000 volumes it held 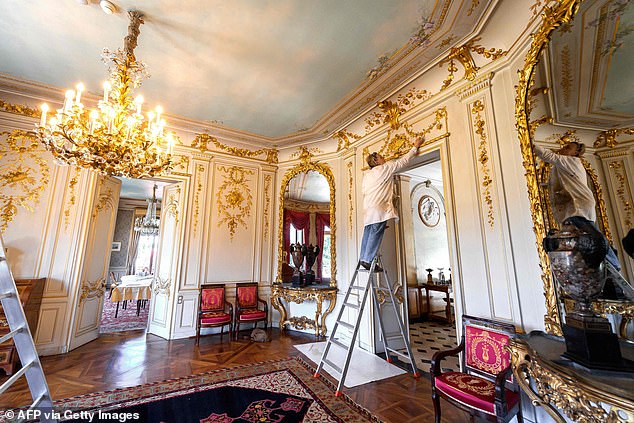 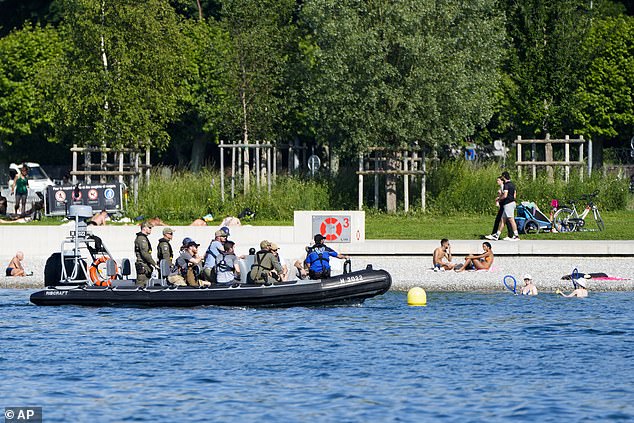 A boat with police officers patrols alongside the shore of the Lake Geneva near the ‘Villa La Grange’ in Geneva, Switzerland Monday, June 14, 2021 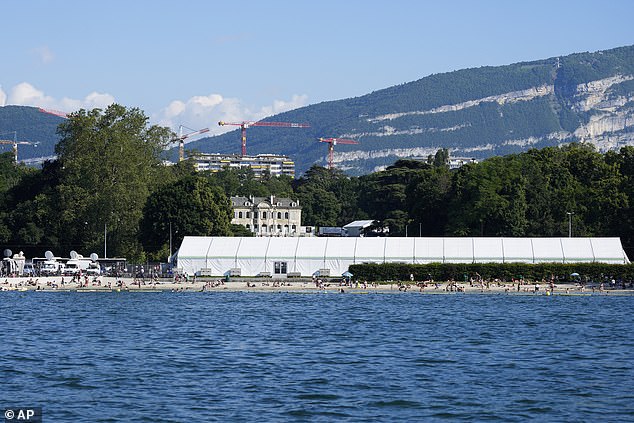 The villa is located on Lake Geneva (Lac Leman) 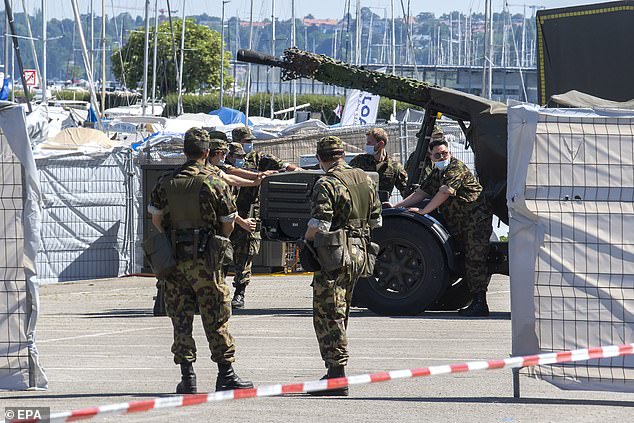 Big Guns: Anti-aircraft cannon of the Swiss Army on the bank of the Geneva lake near the Villa La Grange in Geneva, Switzerland, 14 June 2021

The tranquil setting could be a remedy to reset a relationship that Biden and Putin have described as at a ‘low point.’

‘I think he’s right, it’s a low point, and it depends on how he responds to acting consistently with international norms, which in many cases he has not,’ Biden said.

A city official wouldn’t say whether the two men would meet in the villa’s bibliotheque, the library, which was created with two rooms of the 12,000 volumes that were on hand.

‘We do not have information on where the presidents will meet,’ the official told DailyMail.com, speaking in French. 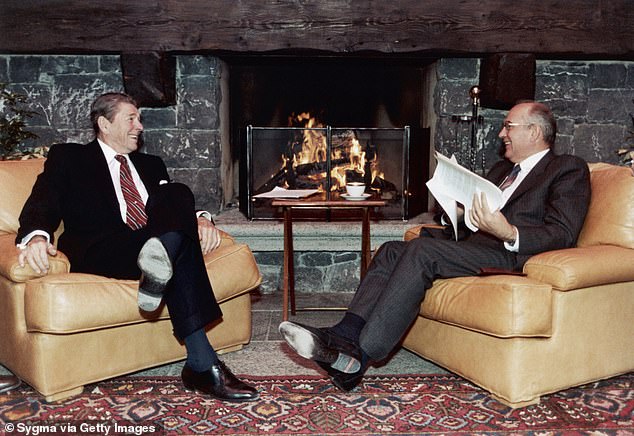 Ronald Reagan and Mikhail Gorbatchev share jokes on a break during the Geneva summit in 1985. The two met in a different villa which is now up for sale 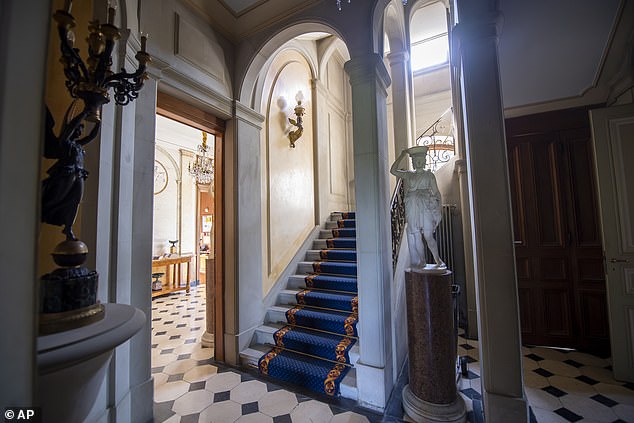 Biden hopes to elevate U.S.-Russia to bring them to a more stable and predictable level

The room has books in tongues including Turkish, Persian, Chinese, Hungarian, and various Germanic language, after summit meetings where the White House said Biden would meet dozens of foreign leaders.

It is unlikely the meeting will have lighthearted moments from the Helsinki summit, like when Putin presented Donald Trump with a soccer ball (which was later revealed to pose security issues since Adidas puts a microchip in side).

‘The bottom line is that I think the best way to deal with this is for he and I to meet, for he and I to have our discussion – I know you don’t doubt that I’ll be very straightforward with him about our concerns,’ Biden said before the summit. On Monday, he called Putin a ‘worthy adversary.’

The Reagan-Gorbachev summit in 1985 took place at the Villa Fleur d’Eau, a newer mansion built in the 19th-century villa. That building has 26 rooms – and is now up for sale. ‘

According to a real estate listing it has been ‘fully converted into offices’ with ‘superior quality materials and is in a state one could consider as new’ and is occupied by a global trading company.

‘However, the building could just as easily be converted back into a dwelling.’