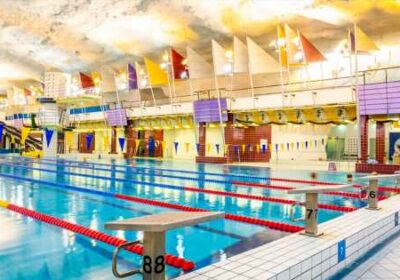 War anxiety prompted Finland, which shares an 833-mile border with its longtime nemesis Russia, to build and underground world to “save people against the actions of war.”

Russia attacked Finland in the Winter War of 1939-40 and then again later in the Second World War, so, when Helsinki city planners began excavating tunnels through bedrock in the 1960s to house power lines, sewers and other utilities, they saw an opportunity.

Officials saw opportunities for retail, cultural, and sporting attractions, and also relaised that the underground network of tunnels could shelter the city’s population of 630,000 in the event of war.

In 1993, with safety and leisure in mind, a pool that in less than a day can be drained of water and reconfigured to be a bomb shelter, capable of accommodating nearly 4,000 people, was added to the network.

The pool, beneath 15 metres of granite, has massive blast doors, an air filtration system and even pressure valves capable of dealing with vast explosions.

Tomi Rask, who works for the city's Rescue Department, said: "If something unordinary happens, we are not paralysed completely – we can keep society working on some level at least."

Finland, and neighbouring Sweden, look set on joining the NATO military alliance, in what would be a historic policy shift for the two northern European states.

In polls taken after the invasion of Ukraine by Russia, roughly 60% of Finns said they would favour applying to join Nato.

Former Finnish prime minister Alexander Stubb said: “If Russia is ready to slaughter their Slavic brothers in Ukraine, why would it not do the same thing with Finland? Many Finns woke up and said: ‘Enough! Now it is time to join Nato'."

Pekka Haavisto is the country's foreign minister. He said: "Finns are very security-oriented people and when they see possible security threats they are thinking about the worst-case scenario.

"We hope that these will never come. People don't like war and people want war between Ukraine and Russia to come to an end, but at the same time you are ready to defend your own country. I think this is what the current mood in Finland is."