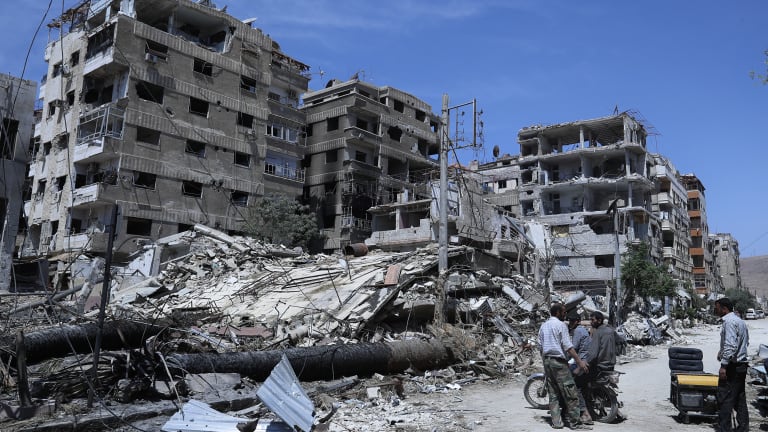 People stand in front of damaged buildings, in the town of Douma.

Beirut: Almost two weeks after a suspected chemical weapons attack killed almost 40 people in Syria, a team of experts arrived on Saturday at one of the sites of the alleged attack in the city of Douma.

"Early on April 21, a special OPCW (Organisation for the Prohibition of Chemical Weapons) mission for finding traces of chemical weapons left for the city of Douma to the place of suspected use of toxic chemicals on April 7," said Russian foreign ministry spokeswoman Maria Zakharova, according to a report from the official Tass agency. The OPCW later confirmed in a statement its team had reached one of the sites to collect samples.

"The OPCW will evaluate the situation and consider future steps including another possible visit to Douma," read the statement, adding that the samples would be sent to a lab in the Netherlands for testing.

The nine-person team's mandate is to determine if a chemical attack took place and what chemical agent was used. It cannot apportion blame.

In Douma, the experts will have to gather biological samples from victims, both survivors and fatalities, as well as environmental evidence, said George Famini, a former US government official and now chemical safety consultant with 35 years in chemical defense and security.

Both agents believed to be used in the attack degrade over time, making tests for the actual agent difficult, he said.

The team had been waiting for a week to enter Douma, just a 10-kilometre drive north-east from where they were staying in the capital, because of what Russian and Syrian authorities said were security issues.

The city was the recent focal point of a large-scale government campaign aimed at routing armed rebel factions from Ghouta, the suburban areas ringing the capital.

During the final phase of that assault, opposition activists and medical workers contend troops loyal to Syrian President Bashar Assad bombed two areas of Douma with chemical-filled barrel bombs, metal barrels packed with explosives and detritus that the government has dropped often on rebel-held areas.

Medics said hundreds of patients exhibited symptoms including skin discoloration, burning eyes and foaming at the mouth, indications of exposure to what they said was chlorine gas, a chemical poison, and sarin, a nerve agent. 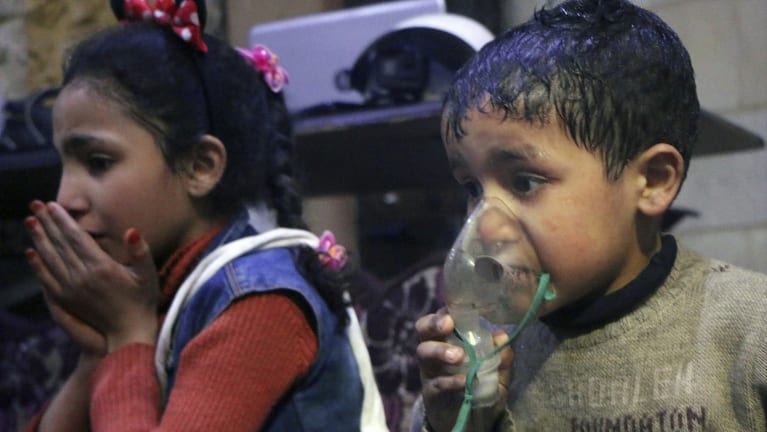 This image released early on Sunday, April 8, 2018 by the Syrian Civil Defence White Helmets, shows a child receiving oxygen through respirators following an alleged poison gas attack in the rebel-held town of Douma.

Both Syria and Russia, Assad's top international backer, dismissed the claims and invited the OPCW to investigate.

The rebels surrendered after the attack, and Damascus had declared the area "clear of terrorists," its usual term for the rebels, six days ago. Military police, numerous officials and even foreign journalists visited the area without incident.

Yet, a United Nations advance security team sent this week to the two areas attacked in Douma withdrew after it came under small arms fire and an explosive was detonated, the OPCW's director-general, Ahmet Uzumcu, said in a statement Wednesday.

The OPCW's visit opens another chapter in the confrontation between Russia and Western nations long opposed to Assad's rule.

US, French and British officials have accused Russia of tampering with the site and obstructing the work of the OPCW, even as they insist they already have sufficient proof to hold Assad responsible for the attack.

"We appeal to Western colleagues to refrain from actions obstructing efforts to establish the truth regarding the provocation in Eastern Ghouta," Zakharova said. Moscow expected the OPCW to conduct "an impartial investigation" and submit "an unbiased report as soon as possible," Zakharova said.