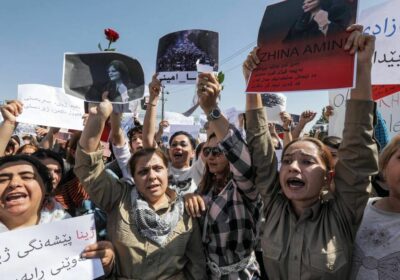 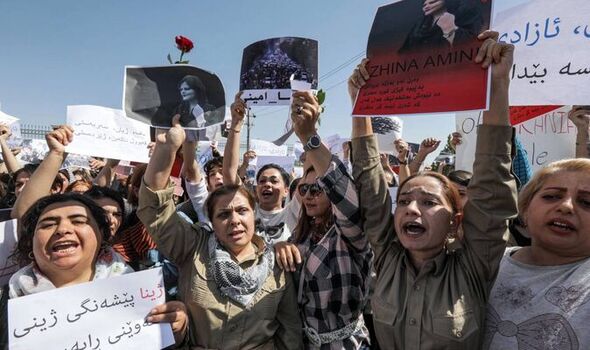 And last night protesters said there was something “different” about the wave of demonstrations rippling through Iran. The protests have already spread to 100 cities and have led to thousands of arrests and at least 50 deaths. Iran’s hardline president Ebrahim Raisi has staged pro-regime rallies and last night declared that protesters should be “confronted decisively”.

Speaking from Tabriz, in Northern Iran, labourer Sohrav Shalchi said: “There have been demonstrations before, but this feels different.

“We have been protesting for a few days now.  At first, it was mostly women.  I have seen young girls with bare hands stand up to armoured cars, declaring they have had enough of this regime. It takes a lot of courage.

“But it is not only women who are protesting now. I have been protesting too with my wife and daughter. I’ve seen many of my friends standing alongside us.”

Despite government attempts to block the internet, videos showing other protestors in other cities had given him strength, he added.

“I was shown a video which showed some men attacking a group of morality police in Shiraz who were trying to arrest another woman. They freed her,” said the 60-year-old.

“We men have changed since the days when Khomeini was in power. When we see a young woman like Mahsa being killed in this way , it is like my daughter who has died. They cannot be allowed to get away with it.”

He said the poverty which has swept across Iran has laid the ground for these protests to continue.

“The government already admits that two-thirds of all Iranians live under the poverty line., I am one of those people. I have worked  hard all my life but still I earn less than £300 a month. I cannot afford to buy or run a car, We only eat meat occasionally, because it now costs £8 per kilo and it is considered a luxury.

“Here in Tabriz, we go without electricity for many days at a time, and the water we now drink smells like sewage. It’s been several months that we have no clean drinking water.

“We don’t blame the US or sanctions. We are a rich country. We are still selling a million barrels of oil every day. But this money is not spent on us.

“The women who are confronting police or shaving their heads feel they have nothing to lose now. They are right. None of us do.”

Though Iranians have enjoyed a steady relaxation of strict rules following the death in 1989 of Ayatollah Ruhollah Khomeini, Raisi – who, as a Khomeini-appointed judge, was responsible for the deaths of 30,000 political prisoners in 1988 – has been bringing them back.

“Raisi always said he wanted a return to Islamic values. People thought it was just rhetoric, a campaign slogan, but now they see he meant it literally,“ said Iran expert Catherine Perez-Shakdam, of the Henry Jackson Society think tank,

“They see he is intent on bringing the Islamic Republic back to the early days of Khomeini, when women would be beaten up in the streets and laws – such as the punishment with 72 lashes of any woman who did not comply with strict dress codes  -were applied to the letter.”

But the clampdown has backfired because men do not support it, she added.

“There is a profound cultural respect for women in Iran which predates Islam,” she said.

“Men see it as their responsibility to protect women, and the actions of Raisi’s regime show them how powerless they are.

“Ironically, this regime is now attacking their own idea of masculinity. That’s different. That’s new.”

Opposition group NCRI/MEK last night said they were helping to organise some of the protests.

“It is very telling that, despite brutal suppression, the regime has failed to quash the protests which differ from the last because people from all walks of life are tasking part and demanding the regime’s overthrow in its entirety,” said spokesman Shahin Gobadi,

“It is time for the world to be on the side of the Iranian people.”