Home » World News » Is this the most complicated roundabout in Australia?

Is this the most complicated roundabout in Australia? 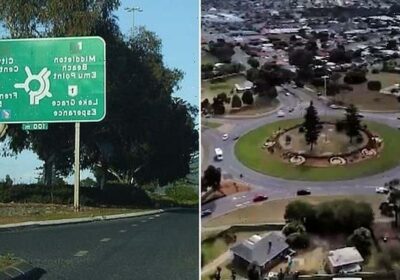 Is this Australia’s most complicated roundabout? Thousands of local residents are sent instructions about how to use

A roundabout in Western Australia dubbed the state’s worst has been the scene of so many accidents locals are now receiving instructions in the mail on how to navigate it.

Residents in the coastal city of Albany, at the southern tip of Western Australia, recently started receiving instructions in their letterboxes on how to use the Chester Pass roundabout.

The roundabout is the main entrance into Albany’s CBD and connects traffic from five roads, including the Albany and South Coast Highways, making it difficult to enter and exit.

It has long been regarded as Western Australia’s worst roundabout however authorities say traffic lights will not fix it.

The instructions issued by Main Roads features four diagrams advising drivers of the lane they should use for the turn they wish to take. 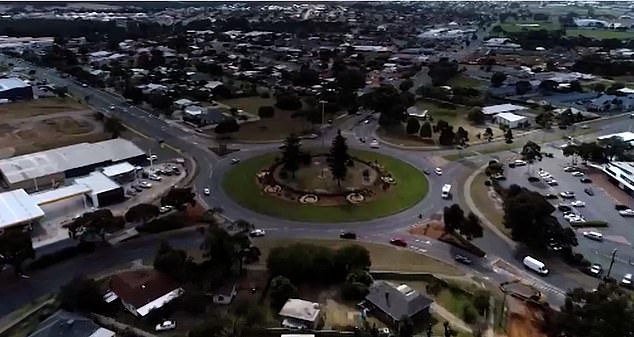 Residents in Albany, Western Australia, are being sent instructions on how to navigate the Chester Pass Roundabout (pictured) after it topped the list of ‘riskiest’ intersections in the state 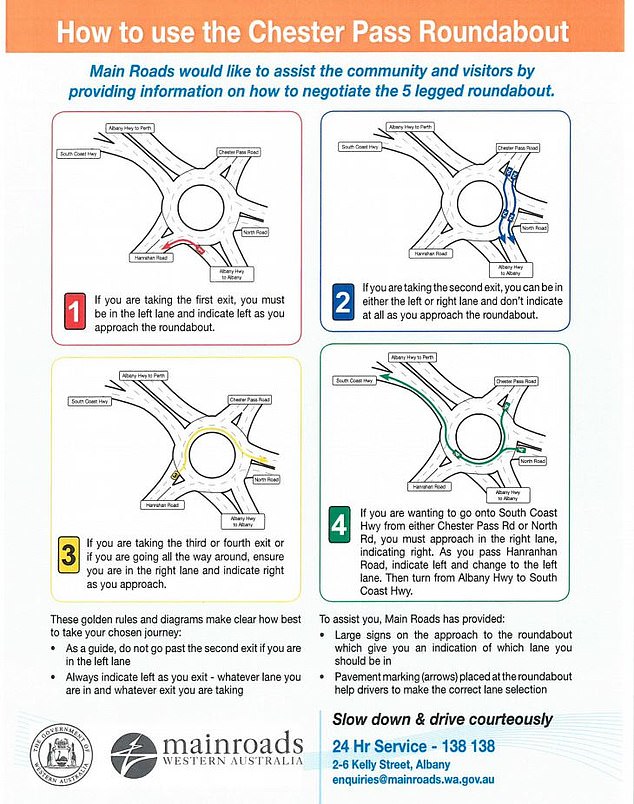 Residents can also access the instructions at the front of the Albany Chamber of Commerce and Industry’s annual business and community directory.

Drivers argued about the complexity of the roundabout after a picture of the instructions was shared on Facebook.

‘There are big huge green signs with huge arrows, how hard can it be?,’ one person commented.

Another wrote: ‘I’ve been on a four lane roundabout with a lot more exits in the UK that have a lot more cars and people get about a lot faster. Small town syndrome needs to be left behind.’

Others argued the roundabout was difficult to navigate especially when drivers unfamiliar with the intersection were passing through.

‘Majority of the confusion comes from tourists who have never been there before. It’s not like any other intersection I’ve come across in Western Australia before,’ one person wrote.

‘Could they make this anymore complicated? What a nightmare if you are not familiar with the roads in Albany,’ another commented.

‘Need to add in a few road trains, heavy rain and five caravans being towed by timid tourists for realism,’ a third joked.

Main Roads said the Chester Pass roundabout is one of the busiest in the state, with about 50,000 vehicles passing through the intersection each day. 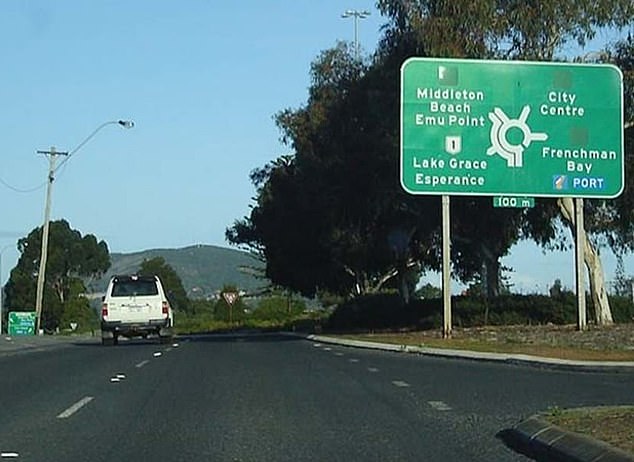 The roundabout is the main entrance into the Albany CBD and connects traffic from five roads, including the Albany and South Coast Highways, with more than 50,000 cars passing through the roundabout each day (pictured, Chester Pass roundabout sign)

‘It is dual lane and connects a total of five roads, rather than the standard three or four, making it slightly more complex to navigate than a standard roundabout,’ Main Roads told The West Australian.

‘How to use the Chester Pass roundabout’ has been available to the public for many years but locals are still confused by the multi-lane intersection.

A survey conducted by peak motoring body RAC in August 2022 ranked the Chester Pass roundabout the ‘riskiest’ in the state for a second time.

The poll, which is released by the insurance company every three years, surveyed 10,000 drivers on regional Western Australia’s riskiest intersections.

Chester Pass roundabout also topped the list in 2014 and ranked second in 2017.

The RAC recommended traffic lights for the busy roundabout, however Main Roads said it was not a ‘viable option’.

‘Main Roads has investigated other possible treatments at this location, such as the installation of traffic signals,’ Main Roads said.

‘However, due to the limited stacking distance for traffic available within the roundabout, this is not considered a viable option.’

There has been 180 accidents at the roundabout within a five year period, with 91 per cent of the crashes property-damage-only.