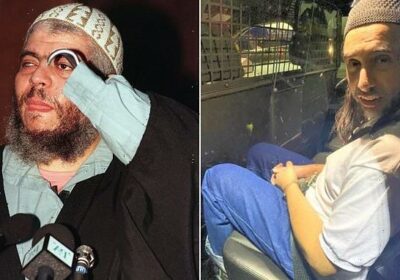 EXCLUSIVE: Islamist terrorist disciple of hook-handed hate cleric Abu Hamza is quietly deported from US back to Britain after serving seven years for trying to start terror training camp in Oregon

An Islamic terrorist disciple of Abu Hamza has been deported from America back to Britain, Mail Online has learned.

Haroon Rashid Aswat, 48, from Batley in Yorkshire, pleaded guilty in 2015 to trying to start a terrorist training camp in Oregon and was jailed in the US.

But earlier this month the US authorities quietly deported him to the UK. It’s unclear where he has been sent.

Aswat had been held at a federal prison medical facility in Devens before being transferred to Immigration and Customs Enforcement custody Wednesday and put on a flight to Heathrow from Boston a week ago. 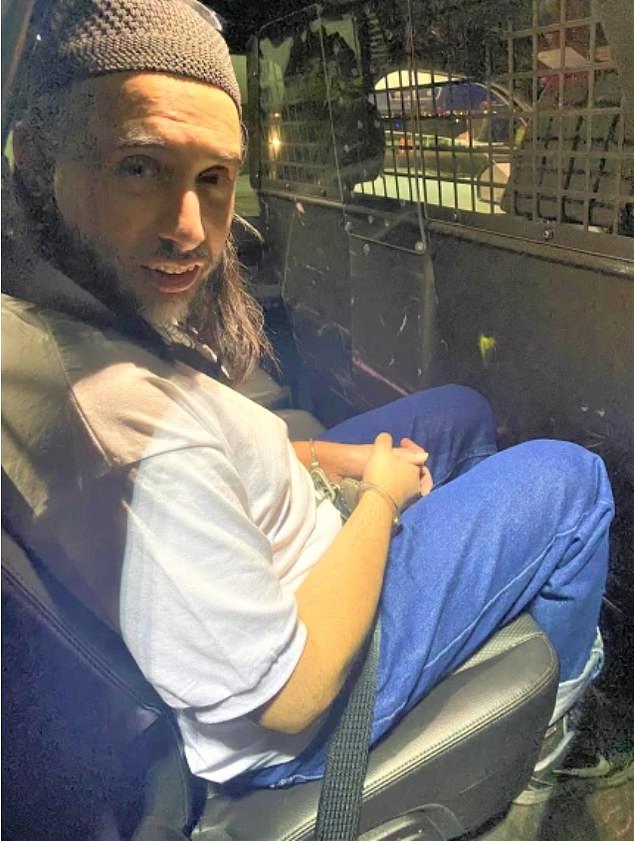 Haroon Rashid Aswat (pictured in Immigration and Customs Enforcement custody earlier this month), 48, from Batley in Yorkshire, pleaded guilty in 2015 to trying to start a terrorist training camp in Oregon and was jailed in the US 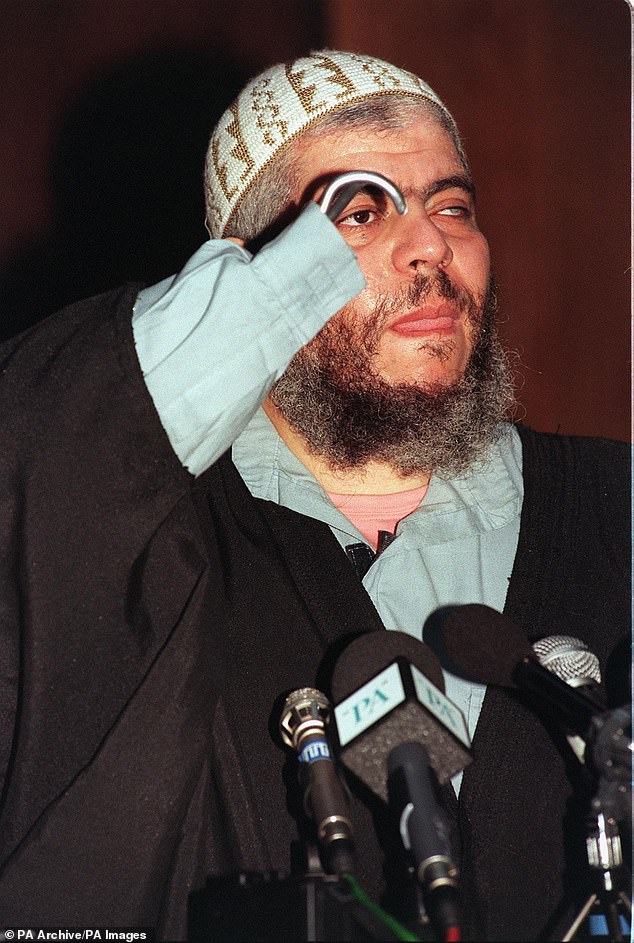 A Home Office spokesperson said: ‘We can confirm that an individual was deported to the UK following the completion of a criminal sentence in the US, where they were extradited.

‘It is right that individuals accused of terrorist activity serve criminal sentences consistent with their crimes.

‘Our priority remains to ensure the safety and security of the UK. We will continue to do whatever is necessary to protect the UK and have one of the most robust counter-terrorism frameworks in the world to ensure this.’

Aswat, who was originally arrested at RAF Northolt on August 7 2005 by officers from the Metropolitan Police Service’s Extradition Unit, spent time in Broadmoor hospital as he suffers from paranoid schizophrenia.

Aswat was born and grew up in Yorkshire but moved to Wood Green in north London where he fell under the spell of hate preacher Abu Hamza – and together they planned a terror training camp in Oregon with Aswat moving to Seattle to organise it.

He also spent time in Afghanistan and in Pakistan – where he met and associated with fellow Yorkshire terror sympathiser Mohammed Sidique Khan and his accomplice Shehzad Tanweer who would go on to mount the 7/7 bomings in London which killed 52 people on public transport in July 2005. 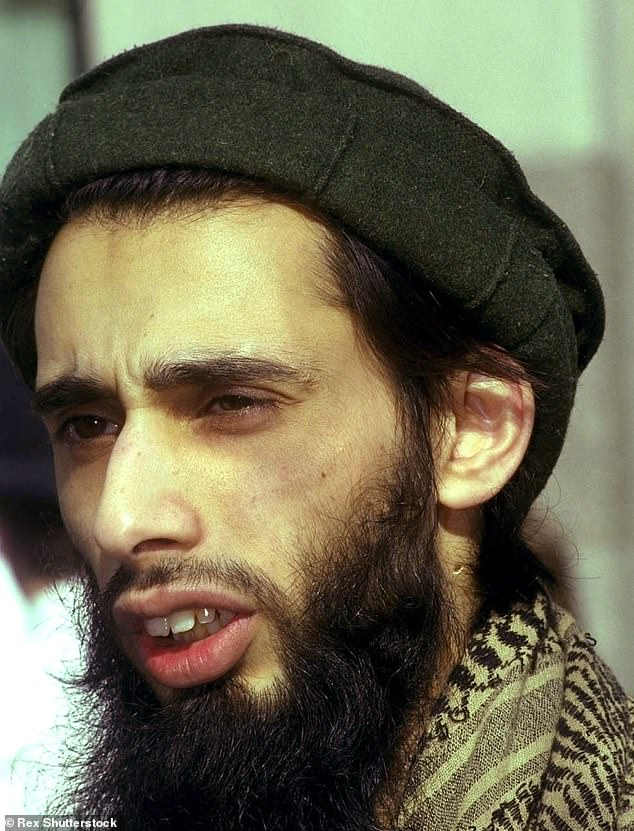 Aswat (pictured in 2015), who was originally arrested at RAF Northolt on August 7 2005 by officers from the Metropolitan Police Service’s Extradition Unit, spent time in Broadmoor hospital as he suffers from paranoid schizophrenia

His guru hook-handed Hamza, whose Finsbury Park mosque became notorious for extremism, was also extradited from Britain to America and found guilty of 11 terrorism charges after a trial in New York. He is serving life without parole.

Last year it was reported that Hamza was trying to get back to Britain by demanding ‘compassionate release’ from his American jail where he has repeatedly complained about being deprived of his hand hooks and a lack of halal food.

It came to light that he was suing the US authorities over what he calls ‘cruel and degrading’ conditions at its high-security supermax prison in Colorado.

The Mirror reported at the time that Hamza’s lawyers had reportedly been supplied with his medical records as part of his legal challenge, and if they are used to secure his freedom after being jailed for life there would be nothing to stop him returning to Britain.

ABU HAMZA – THE EGYPTIAN ENGINEER WHO BECAME A PREACHER OF HATE 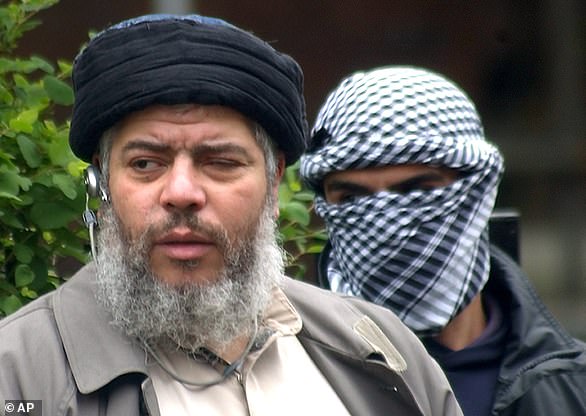 Abu Hamza al-Masri was born in Alexandria, Egypt in 1958 as Mustafa Kamel Mustafa, the son of a naval officer and a primary school headmistress.

After initially studying civil engineering he entered the UK in 1979 on a student visa.

He was granted UK citizenship when he met and married his first wife, a British Muslim convert, in 1980. Hamza has previously said she was the one who got him interested in Islam and he converted after taking time off from his job as a nightclub bouncer in London’s Soho.

As he found his new religion and his job incompatible, he instead resumed his civil engineering studies at Brunel University and Brighton Polytechnic, gaining a degree.

He then divorced his first wife, the mother of his oldest son, Muhammed Kamel, who at the age of 17 was convicted of being part of a bomb plot in Yemen and imprisoned for three years in 1999.

He met and married his second wife in 1984 in a Muslim ceremony in London and had a further seven children.

Heavily influenced by the Iranian revolution, he took an interest in Islam and politics, in particularly the occupation of Afghanistan by the Soviet Union.

After meeting the founder of Afghan Mujahideen in 1987, he moved to Egypt and then to Afghanistan, and it was in the following years that he lost his hands and one eye.

Over the years, Hamza has given several different reasons for the loss of his hands and eye. These include a road project in Pakistan, an explosion during a de-mining project in Jalalabad, Afghanistan, fighting the jihad as a Pakistani Mujahideen, and working with Pakistani military in Lahore when an explosives experiment went wrong.

After spending time in Afghanistan and Bosnia in the early 90s, he returned to Britain and adopted a new name – Sheikh Abu Hamza al-Masri.

It was in London that Hamza began his rise to public notoriety as the Finsbury Park mosque imam, where he arrived in 1997.

One year later, in 1998, he helped organise hostage-taking of 16 mostly British tourists in Yemen. Three Britons and an Australian killed in rescue mission.

In 2000, he set up a terrorist training camp in Bly, Oregon, sending volunteers and money to Afghanistan to support al Qaeda and the Taliban.

He firmly placed himself on the national radar in 2001 after speaking out in support of Osama bin Laden following the September 11 attacks.

His inflammatory speeches led to the Charity Commission suspending him from his position at Finsbury Park Mosque the following year.

In 2003, legal moves begin to get Hamza deported to Yemen, a move which he appealed.

In 2004 Hamza was arrested on a US extradition warrant over charges of conspiring to take hostages in Yemen, funding terrorism, and organising a terrorist training camp in Oregon. Charged with 15 offences under the Terrorism Act, temporarily staying US extradition.

In 2006, Hamza was jailed for seven years at the Old Bailey after being found guilty of 11 of 15 charges, but the courts still battle to have him extradited.

He was finally extradited in October 2012, and appeared in a U.S. court, indicted under the name Mustafa Kamel Mustafa, where he pleaded not guilty to terrorism charges.

In May 2014, Hamza was convicted of all 11 charges on terrorism offences at Manhattan’s Federal Court.

In 2020 it emerged he was suing over alleged ‘cruel and degrading’ conditions at its high-security supermax prison in Colorado.