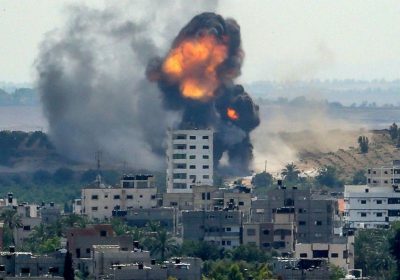 The office of Israeli Prime Minister Benjamin Netanyahu released a statement Thursday evening stating that the Political Security Cabinet accepted a recommendation for a “bilateral cease-fire without any conditions.”

“The chief of staff, the military echelon and the head of the Shin Bet reviewed with the ministers Israel’s great achievements in the campaign, some of which were unprecedented,” the statement read. “The political echelon emphasizes that the reality on the ground will determine the continuation of the campaign.”

Hamas, the Palestinian militant group ruling the Gaza Strip, also has agreed to a cease-fire.

Taher Al-Nono, the media adviser to the head of the Hamas political bureau, said in a statement Thursday evening that an “agreement had been reached for a mutual and simultaneous ceasefire in the Gaza Strip.”

There have been mounting calls around the world for both sides to agree to an immediate cease-fire after 11 straight days of fighting between the Israeli military and Hamas.

The Israel Defense Forces (IDF) said Thursday that rocket attacks from the Gaza Strip toward Israel stopped from 1 a .m. to 9 a.m. local time on Thursday, the longest pause since the violence erupted last week. Israel, however, continued its airstrikes on the Gaza Strip unabatedly, saying it wanted to deter Hamas from future attacks.

Since last week, at least 232 people — including 65 children and 39 women — have been killed by the Israeli airstrikes in the Gaza Strip, according to the Palestinian Ministry of Health. About 1,900 others have been wounded.

Meanwhile, at least 10 people — including a soldier and a 6-year-old child — were killed by the rocket attacks in Israel, and three others died from critical injuries they suffered on their way to bomb shelters. Another 348 have been injured, according to Magen David Adom, Israel’s national emergency service.

In a telephone call Wednesday, U.S. President Joe Biden told Netanyahu that he “expected a significant de-escalation today on the path to a cease-fire,” according to the White House. But Netanyahu resisted, saying just hours later that he appreciated “the support of the American president” but that his country would push ahead “to restore calm and security” to its citizens.

“I am determined to continue this operation until its aim is met,” Netanyahu told reporters Wednesday after visiting the Israeli military headquarters.

A senior Hamas official, Moussa Abu Marzouk, told Lebanese television channel Al Mayadeen on Wednesday that he expected a mutual cease-fire agreement to be reached “within a day or two.”

“I think that the ongoing efforts regarding the cease-fire will succeed,” Abu Marzouk said, noting that the agreement would only apply to the Gaza Strip.

“One, Israeli forces must stop incursions into the Al-Asqa compound and respect the site,” Naim said. “Two, Israel must stop the forced evacuation of the Palestinian residents in the Sheikh Jarah neighborhood. This condition is in accordance with international law, not only a condition expected by the Hamas authority.”

But Israel was not interested, according to an Israeli official with direct knowledge of the matter.

“We say to stop prematurely is to give Hamas the victory it wants,” the Israeli official told ABC News on Tuesday evening. “Hamas has to come out of this defeated.”

Prior to official confirmation of the one-sided truce, there were reports in the Israeli media of an imminent cease-fire but some analysts in the region were skeptical that either side would be willing to lay down their arms. Ghassan Khatib, a former Palestinian cabinet minister who now teaches political science at Birzeit University near Ramallah in the Israeli-occupied West Bank, said it was unlikely because the Israeli prime minister is seeking re-election.

“Within the balances that exist now between Hamas and Israel over the battle, if Netanyahu stops now, Gaza will claim the victory, and the world will say Netanyahu lost,” Khatib told ABC News on Thursday. “Netanyahu has political considerations because he is going to the fifth Israeli election soon, and he needs to make it clear he achieved something. So far he did not.”

“For an Israeli prime minister to end this war, Netanyahu needs an achievement. It’s not related to how long this war will last,” he added. “For now, he is buying time from the Biden administration by talking about cease-fire but continuing his assault on Gaza.”

White House press secretary Jen Psaki said in a briefing Thursday that the Biden administration believes Israel has seen achievements over the past week and a half.

“Our view is we believe the Israelis have achieved significant military objectives that they laid out to achieve in relation to protecting their people and to responding to the thousands of rocket attacks from Hamas,” Psaki said. “And so that’s why, in part, that we feel they’re in a position to start winding their operation down.”

However, Samir Sebehat, a Ramallah-based political expert, was also unconvinced.

“Hamas is not willing to stop the upheaval that is taking place in the West Bank, Jerusalem and among Palestinians inside Israel without any price,” Sebehat told ABC News on Thursday. “They feel they are gaining [momentum] and setting the agenda in Israel and Palestine.

Hamas, which gained a majority in the 2006 Palestinian legislative elections and took control of the Gaza Strip in 2007 after battling rival Palestinian forces, has said that its rocket attacks on Israel were in response to the the recent clashes between Palestinian protesters and Israeli police in Jerusalem’s Old City outside the Al-Aqsa Mosque compound, one of the holiest sites in Islam, amid growing anger over the potential eviction of dozens of Palestinians.

Hundreds of thousands of Palestinians fled or were displaced from their homes during a war that accompanied Israel’s creation in 1948. Some Palestinian refugees were rehoused in the Sheikh Jarrah neighborhood of east Jerusalem, just outside the Old City, by the Jordanian government in the 1950s — before Israel captured the city from Jordan during the 1967 war, along with the Gaza Strip and the West Bank. Now, several Palestinian families are facing possible eviction from homes on land that Jewish settlers claim they lost to Arabs during the 1948 war. Israeli law allows citizens to take back such land, but it does not allow Palestinians to do the same.

Mass protests against the decades-old legal battle have taken place in and around the Old City in recent weeks. Hundreds of people were injured earlier this month after Israeli police fired tear gas and stun grenades at Palestinian demonstrators who hurled rocks and chairs outside the Al-Aqsa Mosque. Then on May 9, the Israeli Supreme Court decided to delay a ruling on the eviction case by up to 30 days after the attorney general requested more time to review.

Hamas and Islamic Jihad, a smaller Palestinian militant group, began firing a barrage of rockets toward Israeli territory on the night of May 10. In response, the IDF unleashed airstrikes aimed at what it said were Hamas and other terror targets in the Gaza Strip, a 140-square-mile territory where 2 million Palestinians have lived under a blockade imposed by neighboring Israel and Egypt since Hamas seized power.

The IDF said that Hamas and Islamic Jihad have fired more than 4,070 rockets from the Gaza Strip into southern and central Israel since May 10, of which approximately 610 misfired and exploded inside the Palestinian territory. The rockets were aimed at various Israeli cities, including Jerusalem and Tel Aviv, with some striking multiple homes as well as a school, a hospital and a bus. Israel’s air defense system, known as the Iron Dome, has intercepted about 90% of the rocket attacks, according to the IDF.

Meanwhile, the Israeli military has conducted over 1,450 airstrikes on the Gaza Strip since last week, according to the Palestinian Ministry of Health, which said the attacks are targeting “densely populated residential areas” and have destroyed more than 1,000 houses and apartments as well as dozens of government buildings, schools, hospitals and businesses. Some 50,000 families have been displaced so far, the health ministry said, warning of overcrowded shelters becoming “a dangerous environment for the rapid spread of COVID-19.”

Unlike Israel, the Gaza Strip has no air raid sirens or bomb shelters. The IDF has said it warns people to evacuate before striking targets in civilian areas.

However, human rights watchdog Amnesty International said it has documented four deadly attacks by the Israeli military launched on homes without prior warning and is calling for the International Criminal Court to urgently investigate. The London-based organization said the attacks “may amount to war crimes or crimes against humanity.”

“Although the Israeli military has given no explanation of what military objectives it was targeting in these attacks, it is hard to imagine how bombing residential buildings full of civilian families without warning could be considered proportionate under international humanitarian law,” Saleh Hijazi, Amnesty International’s deputy director for the Middle East and North Africa, said in a statement Monday. “By carrying out these brazen deadly attacks on family homes without warning, Israel has demonstrated a callous disregard for lives of Palestinian civilians who are already suffering the collective punishment of Israel’s illegal blockade on Gaza since 2007.”

The IDF said its airstrikes have hit hundreds of terror targets in the Gaza Strip, including rocket launch sites in civilian areas, attack tunnels along the border, weapons storage facilities, several homes purportedly belonging to Hamas officials and a number of high-rise buildings in Gaza City that Israeli officials alleged were used by Hamas’ military wing. Among the targets was a building that housed offices of the Associated Press, Al-Jazeera and other media outlets.

While both sides continued trading airstrikes and rockets, Palestinians across Israel, the Gaza Strip and the West Bank — a landlocked territory bordered by Israel and Jordan — have been protesting against the ongoing Israeli military offensive, violence against Arab Israelis and the looming eviction of Palestinian families in east Jerusalem. Clashes between Palestinian protesters and Israeli police have turned deadly in the West Bank, with a total of 28 Palestinians killed and more than 1,400 injured, according the Palestinian Ministry of Health.

Brig. Gen. Ismail Qaani, commander of the elite Quds Force of Iran’s Islamic Revolutionary Guard Corps, sent a letter to Hamas’ military chief on Thursday lavishing praise on the “resistance and resilience” of Palestinians and vowing Iranian support for them. Qaani said his country would stick to a promise made by his predecessor, Qassem Soleimani –who was killed in a U.S. airstrike approved by then-President Donald Trump in January 2020 — that “we will never leave Palestine on its own no matter how the pressure and siege intensify.”

“The enemy knows well that Palestine is now not alone and that it has the backing of a growing resistance axis,” Qaani said in the letter. “We will never back off unless those usurpers and oppressors are demised.”

The United States deployed a delegation to the Middle East to meet with leaders from both sides amid fears that the Israeli military would launch a ground invasion of the Gaza Strip.

Palestinians want to include the Gaza Strip and the West Bank in their future state, with east Jerusalem as their eventual capital. The U.S. government has voiced support for a two-state solution to the Israeli-Palestinian conflict, which would create an independent Israel and Palestine. However, Trump recognized Jerusalem as Israel’s capital in 2017 and relocated the U.S. embassy there from Tel Aviv in 2018, a controversial move that was welcomed by Israelis and condemned by Palestinians.