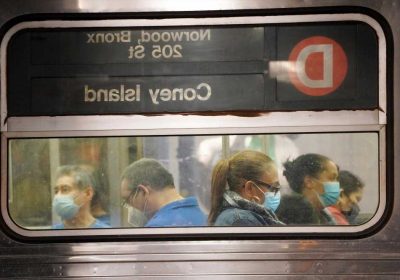 We never thought we’d say this, but we want to smell the subway again.

The vaccinated are allowed to go without masks on the streets, in restaurants, in stores, in offices. But still on the subway and other rail lines they must wear one. It’s pointless and performative. It’s time to lift the mask mandate.

The pandemic is over, as New York’s (maskless) ticker-tape parade Wednesday and the grand fireworks this weekend attest. The unvaxxed should still mask in many places, but for others — the vaccinated majority, by the way — it’s an irrational burden.

Legally, it’s now on President Joe Biden: The day after taking office, he ordered that face-coverings be worn on all forms of public transportation — planes, trains, buses, boats. The feds issued broad requirements for transit agencies, like the Metropolitan Transportation Authority, that last until at least Sept. 13.

The wisdom of Biden’s diktat is debatable: President Donald Trump left it to states, and individuals, to decide for themselves.

Yet at least Biden could claim COVID was a serious threat back in January: The vaccines were just rolling out; less than 5 percent of Americans had even one dose, and less than 1 percent were fully vaccinated as the nation was seeing more than 200,000 new cases and thousands of deaths a day.

But on Tuesday, the seven-day average daily death toll was just over 200 nationwide — a 90 percent drop. The people who are getting infected are almost universally unvaccinated even though they have the option to do so. More than two-thirds of adults have now had at least one jab; more have natural immunity.

Republicans are right to demand Biden lift it now: “It makes no sense that someone can go to a restaurant without wearing a mask, but they cannot fly on an airplane without one, even though it has a far better ventilation system,” notes moderate Sen. Susan Collins (R-Maine).

And the data show that, particularly in New York, the danger has passed: Wednesday, Gov. Andrew Cuomo announced the state’s seven-day COVID positivity rate was under eight in 1,000, with just five coronavirus deaths over the previous 24 hours. All despite the fact that many New Yorkers have been gathering indoors and outdoors — sans masks — for weeks.

Meanwhile, more than 70 percent of New Yorkers have had at least one shot, and two-thirds are fully vaccinated. Even the Delta variant isn’t much of a worry, at least for the jabbed, since the vaccines work just fine against it.

As for those yet to be vaccinated, well, that’s their decision — at this point the shots couldn’t be easier to get.

So why wait until September? Why should Cuomo and his transit agencies keep following a no-longer-applicable federal rule like mindless sheep? It’s time for governors to put pressure on Biden to lift the restrictions. If we want a normal life, we have to start acting like it.