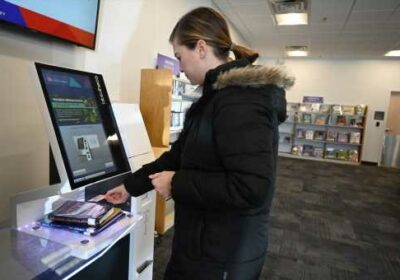 ARVADA — Rachel Massman scanned her library card in the reader, punched in a four-digit code and opened the door of the Express Library West Arvada — entering into a first-of-its-kind standalone “ghost library,” where there is no staff on hand and cameras watch your every move.

“I think it’s exciting,” said the Arvada resident one morning this week. “I work at home and I got tired of looking at my own four walls. I’m very excited to try something new.”

Jefferson County Public Library is touting its new express library as a novel and convenient approach to providing library services to a society that is increasingly accustomed to automation and self-service.

It serves a fast-growing area of Arvada that doesn’t have a library branch nearby.

“JCPL seeks out innovative ways to meet the needs of our patrons,” library spokeswoman Kim McGrigg said. “This self-service library location, high-tech offering hits at the core of our commitment to meeting people where they are and using state-of-the-art technology to serve the public’s needs.”

The branch, tucked into a vacant storefront in the Arvada West Town Center at the northeast corner of West 64th Avenue and Indiana Street, opened Monday. Nearly 500 people have signed up online to access the new branch — which can be done with a library card and a PIN provided by the library — in just the first few days of operation.

“The people I’ve talked to are so excited,” said Kelly Duran, public services manager for the district, who is overseeing the opening of the new branch. “They’re proud of Jeffco taking the chance to try this. As far as we know, it’s the first in the U.S.”

Several other library districts in the country offer staff-free hours, but they generally come as before or after-hours add-on services to existing full-service branches. The Express Library West Arvada is open from 9 a.m. to 8 p.m. Monday through Thursday, 9 a.m. to 5 p.m. Friday and Saturday, and noon to 5 p.m. on Sundays.

While Duran will man the new branch for the first couple of weeks it’s open, it will eventually operate without any staff on continuous duty. Inside the 1,600-square-foot space, patrons can check out and return books and DVDs, pick up items that are on hold and use two Internet-connected computer terminals, along with a printer and copier.

Free Wi-Fi is available for those who want to work on their own devices. The branch has an automated checkout kiosk — the same as can be found in most Jefferson County library branches today. While a bit threadbare in its debut week, the new branch will be getting a comfy chair and additional seating for those who want to linger.

Massman, who used to have to drive 15 minutes to either the Golden or Standley Lake branches from her Westwoods home in northwest Arvada, can now make it to the express branch in 3 minutes.

“I think it increases accessibility,” she said. “I’m definitely picking up books for my (5-year-old daughter) today.”

In addition to a small children’s section, the express library has a limited selection of non-fiction, self-help and top seller books, as well as shelf space for popular and new DVD releases. On display on the main shelf this week were John Grisham’s “The Judge’s List,” Bob Woodward’s “Peril,” and C.J. Box’s “Shadows Reel.”

The DVD section included the recently released “West Side Story” and “King Richard.”

“We carry the highly popular and new releases,” Duran said of the branch.

McGrigg said the cost to equip and stand up the express library was approximately $141,000, including a 5-year lease on the space. The software behind the self-access door code system, provided by library tech firm Bibliotecha, costs $9,000 per year.

Kristy Rieger, tech manager for Scott County Library in suburban Minneapolis, said her district has been using Bibliotecha technology to allow self-access for patrons before and after hours at one of its branches since last September.

She said early risers and senior citizens use it in the early morning hours before staff arrives at the library. The system is also convenient for workers with non-traditional working hours.

“It gives people the choice of visiting the library when it works for them,” Rieger said. “It’s been really cool for us to see people who we haven’t seen because the hours didn’t work for them.”

Margaret Heller, who leads a division at the American Library Association, acknowledged that it’s possible to run a library branch without “an expert on hand,” but she said there are so many staff working behind the scenes to move materials around and restock shelves on a daily basis that it’s somewhat of a misnomer to characterize the branch as unstaffed.

She cautioned that not providing on-site staff could prove “immensely frustrating” for patrons who run into problems with the technology and systems that are integral to the branch’s operations. There have been complaints overseas, where ghost libraries have been around for a while.

According to a 2019 story in The Guardian, residents in a city north of London expressed concern about the self-access, non-staffed approach to library operations there. Some felt library authorities were depriving residents of the expertise of librarians while others bemoaned technological glitches, like problems with the keypad that opens the door.

Others worry about the job security of library employees in the face of increased automation. McGrigg, the spokeswoman for Jefferson County Public Library, said the express library “will not replace any staff nor impact staffing at other locations.”

“With the Express Library, we can provide a more holistic library experience than what we can offer with lockers or a lending machine,” she said. “Residents have the choice to choose location convenience with self-service at the new Express Library and have the option to utilize Arvada or Standley Lake locations when they need in-person help.”

She pointed out that there is a phone in the branch that connects to a library help line for those needing assistance. The phone also connects to 911 in case of emergencies. Patrons are asked not to let anyone into the branch who doesn’t have a card or PIN.

“We are excited to learn from our patrons how and when they use the space,” McGrigg said. “While there are no immediate plans for a second location, this opening does signify a beginning to a potential new future in library services.”