Joe Biden should consider AIRSTRIKES against Cuba, says US mayor 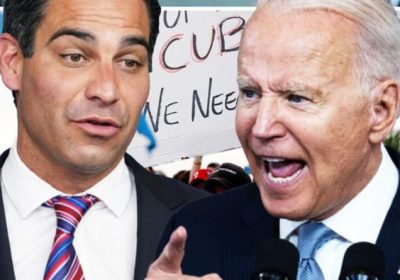 Cuba: Miami mayor floats US air strikes as a possibility

Francis Suarez made his incendiary remarks in an intervention which will stoke already heightened tensions still further, with Russia and China having issued warnings about the danger posed by any US military intervention. Speaking to Fox News, Republican Party heavyweight Mr Suarez was asked whether the United States should lift a strict embargo on exports to Cuba which some critics have described as “cruel”.

He said: “I don’t think the embargo is cruel at all and I think that the Cuban people aren’t asking for a lifting of the embargo.

“They’re going out on the streets every single day, talking about the failure of the communist regime to provide for its people, and I don’t understand why that’s so difficult for people to understand, it has failed for six decades.

“And what should be being contemplated right now is a coalition of potential military action in Cuba, similar to what has happened in both administrations in both Republican and Democrat administrations.

“Republican with Bush and Panama, they deposed Noriega, and that country had peaceful democracy for decades.

“And you had interventions by Democratic presidents, you know, taking out Osama bin Laden in Pakistan.

“It’s a sovereign country where they took out a terrorist that probably saved thousands if not hundreds of thousands of lives, and President Clinton and Kosovo intervening in a humanitarian issue with airstrikes.”

Asked whether he would explicitly back airstrikes, Mr Suarez explained: “What I’m suggesting is that that option is one that has to be explored and cannot be just simply discarded as an option that is not on the table.

US State Department spokesman Ned Price yesterday said the United States was always considering options that would allow it to support Cuban people and called on the Havana government to demonstrate restraint and open all means of communication, both online and offline.

He told the press briefing: “We call for calm and we condemn any violence against those protesting peacefully, and we equally call on the Cuban government to release anyone detained for peaceful protest.”

Thousands of Cubans joined demonstrations in cities and towns throughout the country on Sunday to protest Cuba’s economic crisis and handling of the coronavirus pandemic, with some calling for an end to communism.

The government has said the demonstrations were orchestrated by US-financed counter-revolutionaries, manipulating frustration with an economic crisis that it says has been largely caused by the decades-old US trade embargo.

Speaking in Moscow, Russian Deputy Foreign Minister Sergei Ryabkov said the Kremlin “stressed the inadmissibility of foreign interference and other destructive actions that are fraught with the destabilisation in Cuba”.

A Chinese Foreign Ministry spokesman Zhao Lijian claimed: ‘The US embargo is the root cause of Cuba’s shortage of medicines and energy.

Any kind of military intervention would be highly controversial given the United States’ disastrous backing of the Bay of Pigs operation, which saw US-trained Cuban exiles unsuccessfully attempt to overthrow the communist regime of President Fidel Castro in 1961.

Months later, a US spy plane spotted Soviet nuclear missiles on the island, triggering a tense stand-off as the US prevented Russian ships from delivering any more weapons.

The episode is usually regarded as the closest the world has ever come to nuclear war.