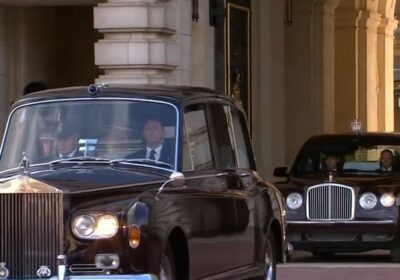 Royal sisters-in-law Meghan Markle and Kate Middleton have had well-documented disagreements over recent years – and today travelled separately in the Queen's funeral procession.

The pair were seen travelling apart, while husbands Prince Harry and William walked side by side behind their father King Charles III as the Queen's coffin made its way from Buckingham Palace.

The funeral procession, which started at exactly 2.22pm today (September 14) is headed to its final destination of Westminster Hall at the Houses of Parliament.

READ MORE: Meghan and Harry 'won't be back' in royal fold after Queen's funeral, says expert

The procession saw the 96-year-old monarch's coffin make final visits to the seats of power and history in the UK before going to Westminster for the Lying-In-State.

She will Lie-in-State until Monday, September 19, the day of her funeral, with those wishing to visit being urged to pay close attention to the government's guidance beforehand.

Access to the coffin in Westminster Hall will be open to the public, but mourners have been warned there will be huge queues that would see people forced to wait overnight to catch glimpse of it.

A million members of the public are expected to travel to London to pay their final respects to Her Majesty – which begins at 5pm today.

But people are being warned they may have to wait for hours – possibly overnight and there will be little chance to rest, as the queue will be continuously moving.

Culture Secretary Michelle Donelan said: “Queues could be up to 30 hours as we are obviously expecting and planning for unprecedented demand.”

Everyone attending will have to go through airport-style security, will only be allowed to bring one small bag, and will have to switch off their phones, be silent inside the palace and wear respectful clothes.

Transport chiefs fear London could be swamped with people travelling to pay their final respects. Network Rail has warned of “unprecedented demand”, and hotels have reported a surge in bookings.