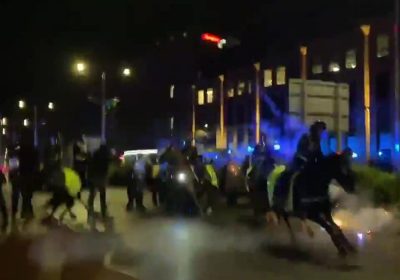 Kill the Bill protesters hurled a live firework at a police horse in a riot that saw 10 people arrested.

The shocking footage was filmed on Friday night as Bristol erupted in violence for the third time in a week, with demonstrators opposing the controversial Police, Crime, Sentencing and Courts Bill.

As the terrified horses reacted to the explosive in their path, mounted officers struggled to control them, and as they bolted to safety, officers on foot were forced to run out of the way to avoid being trampled.

Another horse was seen being covered in paint thrown by one of the protesters.

Officers were also pelted with glass bottles and bricks.

Ten people were arrested during the demonstration, Avon and Somerset Police said.

Superintendent Mark Runacres said: "The majority of people acted peacefully however there was a minority who showed hostility to officers.

"Three of those arrested were also detained in connection with the violent disorder on Sunday."

Last Sunday twenty police officers were injured during protests in the city, including one who suffered a collapsed lung after being stamped on.

Initial reports that some officers had been left with broken bones were later retracted by cops.

Twelve police vehicles were also damaged in last weekend's violence with photos from the scene showing burning cars, and a riot van was completely burnt out.

The action comes amid concerns that the new Police, Crime, Sentencing and Courts Bill will make any form of protesting or demonstration that disrupts daily life illegal.

The proposed law will have an offence of "intentionally or recklessly causing public nuisance", which could apply to protests that shut down city centres, like when Extinction Rebellion made central London grind to a halt with a makeshift camp at Oxford Circus.

Other rules in Priti Patel's bill will allow police to impose a start and finish time on protests, set noise limits, and also apply them to any amount of protestors – including a lone person.

It will also become a crime to fail to follow restrictions protestors "ought" to know about, even if they have not had direct orders from a police officer.

Damage to memorials and statues will also carry a ten year prison sentence.