Korea’s infamous ‘nut rage’ heiress has been served with divorce papers by her husband of eight years, it has been reported.

The husband of Cho Hyun-ah filed a divorce suit in Seoul at the start of April and requested custody of their twin children, Yonhap news agency reported.

The news broke just days after police raided the Cho family homes amid claims they used Korea Air, which they own, to smuggle goods.

At the same time it was revealed that Cho’s mother, Lee Myung-hee, is under investigation for allegedly abusing her staff.

Her sister, Cho Hyun-min, is also being probed by police amid claims she threw water at a business associate during a meeting. 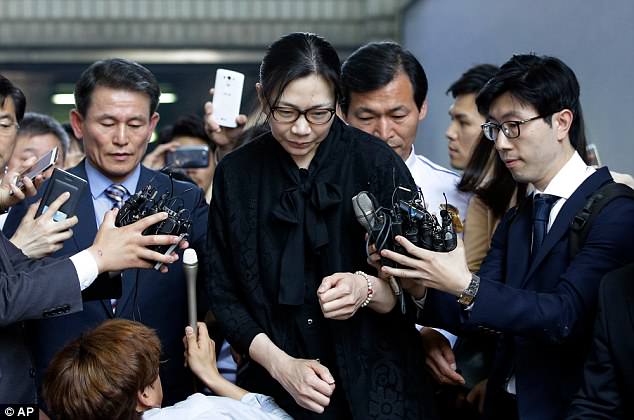 Cho Hyun-ah’s husband has filed divorce papers at a court in Seoul demanding custody of their twin children, eight years after they got married 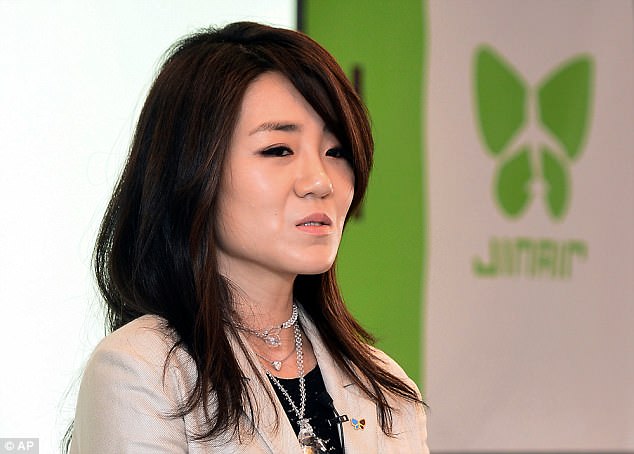 It comes as her sister, Cho Hyun-min (pictured), is investigated over claims she threw water in a businessman’s face during a meeting

Cho and her husband, the head of a famous cosmetic surgery practice in Gangnam, married in 2010 and had twins.

A court date has not yet been set, and it is not clear if Cho has hired an attorney.

Cho Hyun-ah made global headlines in 2014 for berating cabin crew on a flight from New York to Seoul after she was served macadamia nuts in a bag rather than a bowl.

She forced two members of the cabin crew to kneel and apologise before forcing the plane back to its gate so the male member of staff could be kicked off.

Cho was arrested for breaching air safety laws and sentenced to a year in jail, serving three months before being released.

The incident was dubbed ‘nut rage’, prompting the sister’s case to be described as ‘water rage’.

Cho Yang-ho has since apologised for for the ‘immature’ behaviour of his two daughters and said they would both resign from their company posts.

‘As chairman of Korean Air, as well as a father, I feel terrible about the immature actions of my daughters,’ he said in a statement.

‘Everything is my fault and my wrongdoing. I apologise to the people.’

The Korean Air chief added his two daughters will immediately step down from all positions within the company.

Seoul police said last week they were launching a formal investigation into the younger Cho, based on the testimonies of people present at the meeting.

Following the incident, the 34-year-old issued a wide-ranging email apology to ‘everyone’ she had worked with for her behaviour, although she has denied throwing water in anyone’s face. 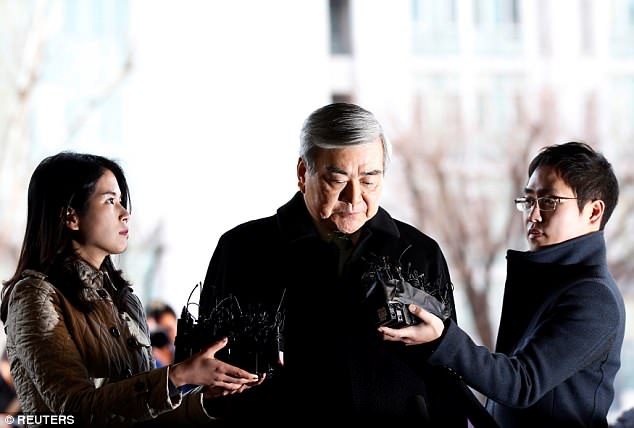 The 2014 ‘nut rage’ incident saw the older Cho, then the firm’s vice president, forcing two flight attendants to kneel and beg for forgiveness on a Seoul-bound flight from New York before ejecting one of them from the plane before takeoff.

The incident was one of the most infamous cases involving offspring of one of South Korea’s mega-wealthy business elite families, whose arrogance and bad behaviour regularly make headlines.

The notorious heiress was jailed but had returned to work as an executive of Korean Air’s hotel affiliate in March.

In the latest instalment, police said on Monday they were looking into whether the sisters’ mother Lee Myung-hee had herself abused employees verbally and physically.

Media reports accused Lee, who is in her late 60s, of a litany of abuse of multiple workers renovating her home and of Korean Air employees, including screaming, cursing, slapping and kicking.

‘We have launched a preliminary probe into suspicions that Lee… assaulted and verbally abused multiple people,’ Yonhap news agency quoted an unidentified police official as saying.

Meanwhile, an official at the Korea Customs Service confirmed that authorities raided the airline’s headquarters in Seoul seeking evidence on alleged smuggling and tariff evasion.

South Korean media reports have cited anonymous tips from airline employees that the Cho family smuggled foreign goods into South Korea by disguising them as corporate assets. A Korean Air spokesman said the family is fully cooperating with the investigation.