Moscow: The Kremlin has brushed off allegations that Russian opposition leader Alexei Navalny was the victim of an intentional poisoning orchestrated by authorities and said there were no grounds for a criminal investigation so far since it hasn't been fully established what caused the politician to fall into a coma.

The insistence by the Russian government that Navalny wasn't necessarily poisoned — comments amplified by Russian doctors and pro-Kremlin media — came a day after doctors at a German hospital where the 44-year-old is being treated said tests indicated he was poisoned. 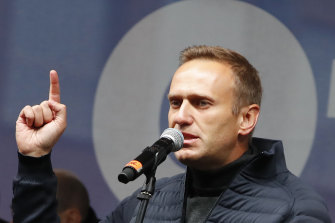 Duma speaker Vyacheslav Volodin tasked lawmakers to look into what happened to Navalny to make sure it wasn't "an attempt by foreign states to inflict harm on the health of a Russian citizen and create tension in Russia" in order to "come up with more accusations" against the country.

Charité said on Monday that Navalny had undergone extensive examination by a team of physicians and that "clinical findings indicate poisoning with a substance from the group of cholinesterase inhibitors".

That covers a broad range of substances that are found in several drugs, but also in pesticides and nerve agents. Charité said the specific substance to which Navalny was exposed isn't yet known but that a further series of comprehensive tests had been started.

The suggestion that Navalny was poisoned has been vehemently rejected in Russia, where a number of Kremlin critics fell victims to suspected poisonings in recent years, since last week. Government officials, medical specialists and state-controlled media offered a variety of possible explanations for Navalny's condition.

Doctors in Omsk, a city in Siberia where Navalny was first hospitalised, ruled out poisoning as a diagnosis 24 hours after the politician was admitted and said "a metabolic disorder" was a likely diagnosis.

The editor-in-chief of the RT state-funded TV channel, Margarita Simonyan, speculated that the politician must have suffered from a sharp drop in blood sugar. Some pro-Kremlin news outlets alleged that Navalny mixed moonshine with sleeping pills.

The Charité statement on Monday prompted another array of denials.

Doctors in Omsk said they tested the politician for cholinesterase inhibitors and didn't find any.

Peskov said on Tuesday that specialists in Omsk noted "lowered levels of cholinesterase" — an obstruction of cholinesterase enzymes can be detected by blood tests, experts say — in his body in a matter of "hours" after he was brought in, but that it could have been triggered by a number of causes, including by "taking various medications".

Navalny’s spokeswoman, Kira Yarmysh, on Tuesday said the government's reluctance to launch an investigation was expected.

"It was obvious that the crime would not be properly investigated and a culprit found. However, we all know perfectly well who that is," Yarmysh tweeted.

Western experts have cautioned that it is far too early to draw any conclusions about how the agent may have entered Navalny's system, but note that Novichok, the Soviet-era nerve agent used to poison former Russian spy Sergei Skripal and his daughter in Britain, was a cholinesterase inhibitor.

"Cholinesterase inhibitor poisons can be given in many ways, they can be transported in many forms, and are very potent," said Dr Richard Parsons, a senior lecturer in biochemical toxicology at King's College London. "This is why they are a favoured method of poisoning people."

Dr Thomas Hartung, of the Johns Hopkins Bloomberg School of Public Health in Maryland, said such substances are easy to detect, even days and weeks after the poisoning, and that "we will know soon which substance was used".

"The Novichok nerve agents, used in the 2018 poisoning of the Russian double agent Skripal in England, also belong to this category of substance," he said. "I said at the time that the Russians could have have just left a business card at the crime scene, because the substances can be so clearly traced."