Labour’s ‘radical’ nationalisation plans would cost ‘many tens of billions of pounds’ and ‘risk years of disruption’, according to the leading IFS think tank

Jeremy Corbyn’s plan to nationalise a swathe of UK industries would cost ‘many tens of billions of pounds’ and ‘risks years of disruption’ to services, a leading think tank has concluded.

Labour’s proposals to bring mail, water, energy supply and distribution, train operators and fibre broadband provision into public ownership are the centrepiece of the party’s general election offer to voters.

But the respected Institute for Fiscal Studies said going ahead with the plan would have major consequences and could even scupper efforts to tackle climate change.

It said that the government would have to ‘provide compensation to current owners at the appropriate market price’ or risk ‘harming the UK’s reputation and standing with other countries’. 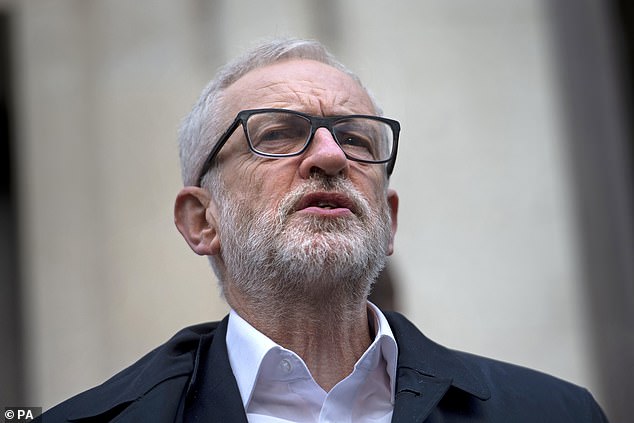 Jeremy Corbyn’s nationalisation plans would cost ‘many tens of billions of pounds’, according to the Institute for Fiscal Studies. The Labour leader is pictured at a campaign event in London today

It said the overall price tag for the shakeup was ‘uncertain’ but added that ‘it would certainly come, at the very least, to many tens of billions of pounds’.

State control of such sectors is ‘not uncommon’ in Europe, the think tank said, but nationalisation on a scale advocated by Labour has ‘been almost unheard of in the last half century’.

The IFS stressed the importance of the relevant industries to the wider UK economy and warned re-organising them ‘while simultaneously achieving the ambitious targets that have been set, for instance the rapid decarbonisation of the electricity and gas grids, risks years of disruption’.

Lucy Kraftman, a research economist at the IFS, said: ‘The industries that Labour plan to nationalise are vital to the UK economy.

‘The key question is whether they would be better managed in the public sector, and what nationalisation can achieve that changing the current regulatory frameworks cannot.

‘At least in the short-run Labour’s current plan would lead to significant disruption which could easily, for example, lead to a hiatus in progress towards decarbonisation in the energy sector.

‘One should have very clear evidence for the long term benefits before embarking on such a complex and costly set of changes.’

Sam Crossman, an IFS research officer, added: ‘The actual cost of nationalising these companies would be high but uncertain given current ownership structures, but it would be crucial to pay fair market value.

‘Nationalisations on this scale in advanced western economies have been almost unheard of in the last half century; that said, UK state control in some of these industries is currently low relative to that in many other European countries.’