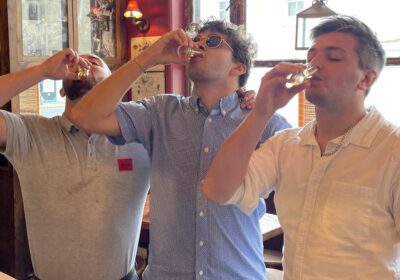 A bloke has claimed to have completely smashed the Guinness Book of World Records for the longest bar crawl with a legendary 67-bar tour.

Nathan Crimp, 22, has smashed the record just months after it was broken by Gareth Murphy, 29, with the competition starting to heat up between bar crawlers.

Welshman Murphy was said to have broken the record for the most pubs visited in 24 hours after a respectable 56 trips and tipples back in February, but his record is said to have come to an end.

Crimp, a recruitment manager from Brighton, appears to have bested Murphy, visiting a total of 67 bars in his hometown of Brighton.

The tremendous, booze-fuelled feat beats out the everyday pub crawl and the endurance test Murphy endured just months prior.

A 24-hour sesh began bright and early at 11am for Crimp on September 17, where he was accompanied by two pals, Ollie and Archie.

The trio set out to beat the World Record, beginning at Ye Olde Black Horse in Rottingdean, a village where Crimp currently lives.

From there, the trio set off on a bender that boasted pints, shots and a total of 67 unique establishments offering up their record-breaking tipples.

In order to prove his record break was a genuine attempt and a successful one at that, Crimp made sure to collect receipts and signatures from every bar as well as providing a GPS tracker that monitored his movements.

Crimp ended up breaking Murphy's attempt with time to spare, and feeling worse for wear decided to push on through, covering 18 miles and 67 pubs in just 17 hours.

Crimp said of his accomplishment: "It was easily the hardest thing I've ever done. I completely underestimated just how hard it was actually going to be.

"The plan was to try and keep it sober for the first 25 pubs, but that went out the window 15 pubs in."

Guinness Book of World Records, speaking to LADBible, said: "We are aware of the latest attempt at the Most pubs visited in 24 hours (individual) and look forward to hearing from Mr Crimp with his evidence submission.

"We'd also like to clarify that […] we do not require any alcohol to be consumed when attempting this record."