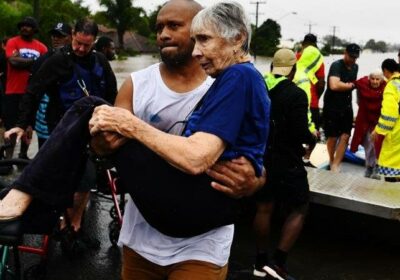 A Lismore nursing home was left to fend for itself for more than seven hours after a record-breaking flood inundated the premises, forcing night staff to move more than 30 residents out of the floodwater without any help from emergency services.

At the time of the crisis, NSW Police were receiving a record number of triple zero calls, prompting police to activate an “extreme event” recorded message, which was played to people whose calls could not be immediately answered by police, fire or ambulance operators. The SES helpline was also overwhelmed by calls for help and the service used the Rural Fire Service’s Bush Fire Information Line call centre to help answer the SES calls.

Fromelles Manor manager Anne Bloom said she spent more than seven hours trying to phone for help on February 28, as the water rose through the aged care facility, run by RSL Lifecare, but her calls to triple zero and the SES helpline rang out or received the engaged signal. Many Lismore residents have reported that they could not get through to triple zero or the State Emergency Services helpline that day.

Fromelles Manor sits on the edge of the February 28 flood zone, with a floor height of 12.85 metres – 70 centimetres higher than the previous record floods in Lismore. The Lismore flood sub-plan, which describes how a flood behaves when it hits Lismore, and how to evacuate the town, does not anticipate a flood of higher 12.4 metres.

The first warning from the Bureau of Meteorology that suggested water could inundate the nursing home was issued at 2.55am on February 28, when the bureau said the flood could reach 12.15 metres at 9am, and may exceed 13.5 metres on Monday evening.

It was not until 5.56am that the bureau forecast a flood of over 14 metres, but by that time water was already making its way into the nursing home. It would eventually peak at 14.4 metres just after 2pm that day, as the nursing home was being evacuated.

Bloom made her first call to triple zero before dawn, while she was still trying to reach the nursing home on foot, after the registered nurse on night duty at the facility rang her and said “Anne, we’ve got water coming through the door”. When Bloom could not get through to emergency services, she called her brother-in-law, a Lismore firefighter. She said his unit told her they would contact the SES on her behalf for assistance. 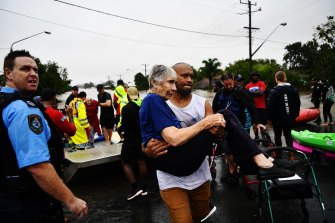 Residents of the Lismore aged care home are rescued by a local group of abattoir workers. Credit:Elise Derwin

“They went up there [to the incident control centre] and gave them our name and number, where we were, and that we needed assistance,” she said. But the SES did not respond, until she finally got through to triple zero at 1.30pm. The SES said the first knowledge it had of the nursing home’s need for assistance was that call which Bloom successfully made, and it responded immediately with other emergency services.

Earlier, Bloom had asked a staff member to use Facebook to rally any off-duty staff who could attend the nursing home and help move 32 of its residents on the ground floor to the first floor, as the water surged into the facility. Six staff members arrived in kayaks. The lift was not working and staff had to carry the residents who could not walk up a flight of stairs.

“By the time we got everyone upstairs, [the water] would have been up to our hips. It was unbelievable. Everyone was safe, and there was no panic, but it was just happening very quickly. I’d say we got everyone up in half an hour.”

When Bloom finally got through to a triple zero operator that afternoon, emergency services arrived within 15 minutes to help the facility evacuate its 63 residents. By that stage, the water was almost up to the ceilings of the ground floor.

The residents had to be passed out a window on the first floor, over an awning and down a metre into awaiting rescue boats, where they were transported to dry land and carried off the boats by Fijian abattoir workers. Some residents were on stretchers, others were receiving palliative care and many had dementia. 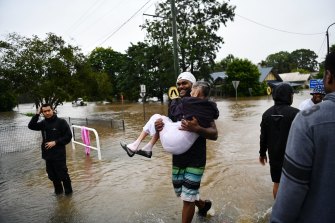 A woman is carried to safety after Fromelles Manor flooded on February 28. Credit:Elise Derwin

Fromelles Manor, which opened in 2012, is not listed as a vulnerable premises in the Lismore flood sub-plan. That plan was reviewed in 2018 by the SES and the local emergency management committee, but the section which lists vulnerable premises and evacuation procedures for different parts of the Northern Rivers town states it was last updated in 2006. It does not mention the Lismore flood of 2017, which overtopped the town’s levee.

Bloom said the SES reviewed the nursing home’s emergency plan when it first opened in 2012. Fromelles Manor also reviewed its plan annually, and NSW Health had reviewed it regularly too.

She said the residents were calm during the evacuation, and her staff knew what to do.

“[Physical] inability is difficult to manage when doing an evacuation like that, but it was well planned,” she said. “We knew our residents and had a plan in place for disasters, and we just followed it … Everyone had a plan, a job and just did it.”

The residents are now being cared for in nearby facilities, where the staff have also been seconded. Fromelles Manor was extensively damaged in the flood and will not open again for some months, while it awaits repairs.

A Telstra spokesman said a triple zero call can be answered by an operator anywhere in Australia and any delay is the result of extreme demand on the emergency service operators on the other end; Telstra operators can spend time waiting for an emergency operator to take the call off them.

“When the emergency services have a higher than planned volume of calls, the [Telstra] operators can be waiting for long periods for an answer. This can impact how quickly the next call is answered in the line,” a spokesman said. “So there is a flow-on delay in call handling.”

Assistant Commissioner Stacey Maloney, from NSW Police, told the Herald that the number of calls to police on February 28 exceeded any other date on record, which is why police requested the recorded message be put in place that morning. Fire and Rescue NSW says it logged 600 triple zero calls on February 28.

The Morning Edition newsletter is our guide to the day’s most important and interesting stories, analysis and insights.