A knife crime epidemic in London and England’s big cities has seen the number of offences involving blades soar by more than a fifth in the last year.

Police in England and Wales recorded 39,598 offences involving blades in the year ending December 2017, a 22% increase compared with the previous year.

London saw a 44% increase in the number of killings, with more than 150 victims, while the number knife offences in the capital rose by more than 20 per cent to 14,680, separate stats showed. 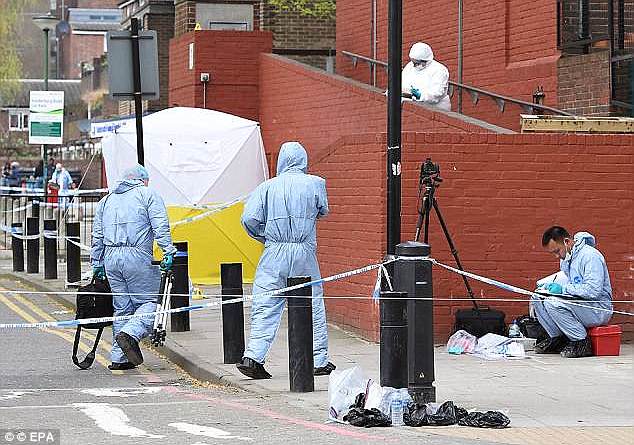 Police at the scene of the latest murder in London, when a 20-year-old man was stabbed to death in Finsbury Park last weekend

The stats were released amid growing concern at the spiralling number of deadly attacks on the capital’s streets, with more than 60 people killed since the start of 2018.

Offences involving firearms were up, by 11% to 6,604 recorded crimes.

Knife and gun crimes tend to be disproportionately concentrated in London and other metropolitan areas, the Office for National Statistics said, but it added that the majority of police force areas saw rises in these types of violent crime.

The figures showed the number of homicides went up by 54, or 9%, to a total of 653, when cases linked to the Hillsborough disaster and last year’s terror attacks were excluded.

In the overall category of ‘violence against the person’, there were 1.3 million crimes logged, a rise of a fifth on the number in 2016.

Recorded burglary and robbery offences went up by 9% and 33% respectively, while the separate Crime Survey for England and Wales showed a 17% jump in vehicle thefts. 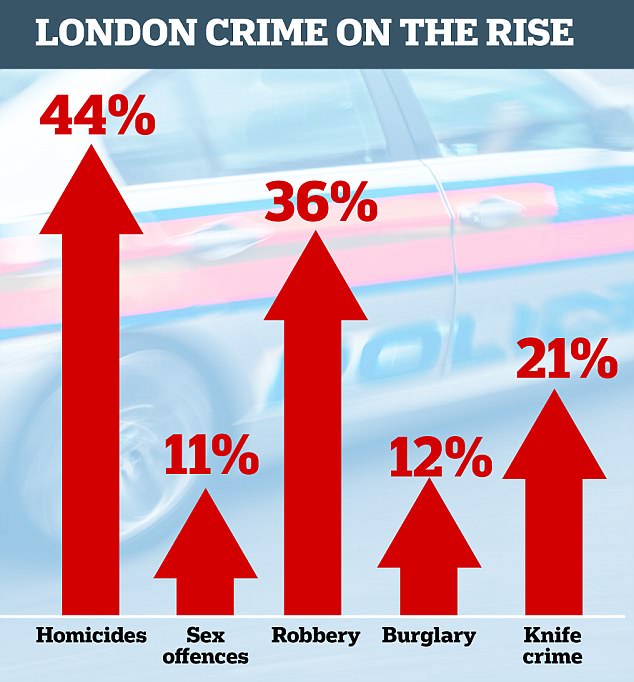 According to the crime survey, which the ONS says is the most reliable indicator of long-term trends in the most common types of offending experienced by the general population, there were an estimated 10.6 million incidents of crime, a fall of 7% on the previous 12 months.

2,000 offenders a year are dodging jail despite a ‘two strikes’ rule

Thousands of repeat knife offenders were spared prison last year despite the Tory ‘two strikes and you’re out’ pledge.

Adults caught with a blade for the second time are supposed to be jailed for at least six months under new laws.

But latest figures show that one in 10 people with a previous conviction for knife possession received a sentence other than immediate custody.

The number of violent offences as measured by the CSEW was unchanged, at 1.2million.

ONS statistician Alexa Bradley said: ‘Today’s figures show that, for most types of offence, the picture of crime has been fairly stable, with levels much lower than the peak seen in the mid-1990s.

‘Eight in 10 adults had not experienced any of the crimes asked about in our survey in the latest year.

‘However, we have seen an increase in the relatively rare, but ‘high-harm’ violent offences such as homicide, knife crime and gun crime, a trend that has been emerging over the previous two years.

‘We have also seen evidence that increases in some types of theft have continued, in particular vehicle-related theft and burglary.’

But the blueprint -unveiled against a backdrop of mounting calls for action following a flurry of killings in London – was overshadowed by a fresh row over police numbers.

Mayor of London Sadiq Khan said: ‘These statistics show once again that crime, and violent crime in particular, is rising at an unacceptably high rate across the whole of England and Wales, including London.

‘This is clearly a national problem that requires national solutions from the Government.’ 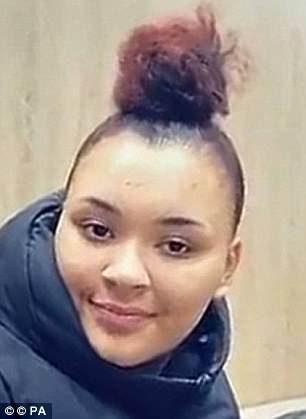 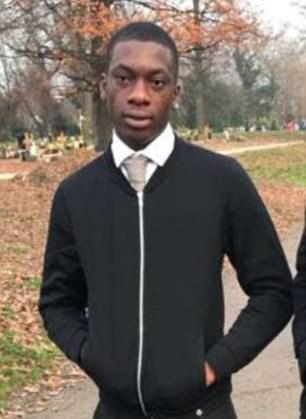 Tanesha Melbourne (left), 17, was gunned down near her home in Tottenham earlier this month. Israel Ogunsola (right), 18, died in Hackney after being stabbed on April 4

‘My thoughts are with the victims’ families of these tragic and horrific crimes which have brought untold misery to countless people.

‘We are strengthening local policing by bringing specialist officers closer to communities, and have increased the number of neighbourhoods officers dedicated to particular areas to engage with the public and work with them to keep them safe.’

Was crime up in your county? Stats for each area in 2017 released

Here is the number of offences recorded by each police force in England and Wales in 2017, together with the percentage change on 2016.

The forces are listed alphabetically. The figures do not include fraud offences.