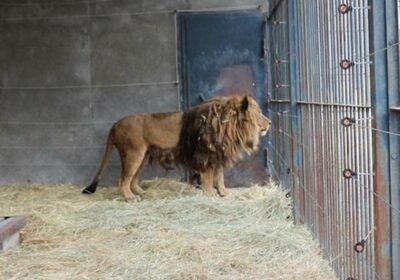 The reason why the zoo in which Ruben was being held shut was because its Russian oligarch own suddenly died.

It is for this reason that Ruben has been left in a small cage for the past five years.

Jan Creamer of animal charity ADI Wildlife Sanctuary, said Ruben was the last of the animals in the compound to be saved.

She said: “Sadly, there was no room for Ruben. Lions live in family groups and roaring is chatting to them.

“He is still trying to roar. Ruben has never felt the sun on his back or the wind in his face.”

Aside from feeling lonely, the impact of five years of isolation has taken its toll on Ruben’s physical heath.

The neglect has left him with matted hair, damaged teeth, and a potential neurological condition.

Although the zoo is shut, the rescue was planned in secret to avoid raising tensions already raised by the war in Ukraine.

Jan added: “It is vital we get Ruben to South Africa as soon as possible to address his more serious issues.”

Jan added: “Ruben has neurological problems, potentially spinal. He wobbles as he walks and sometimes his legs fold under him, but he can move around.

“He has miosis of the eye – supporters will have noticed his small, constricted pupils.

“He appears able to see things, reacts to people around him, even some distance away, and good hearing, so there is good news, too.”

However, Jan said they won’t know the full extent of Ruben’s condition until he is safe in South Africa. Jan added that they were “pressing ahead with the export and import protocols required, as quickly as possible”.

With regard to Ruben’s treatment, as well as reintroducing him to a pride of lions, his bloods are also being assessed by veterinary specialist Peter Caldwell.

Mr Caldwell will then prepare a regime to aid Ruben in his recovery as the charity aims to settle him permanently in South Africa.

Ruben is set to be transported to South Africa in March.