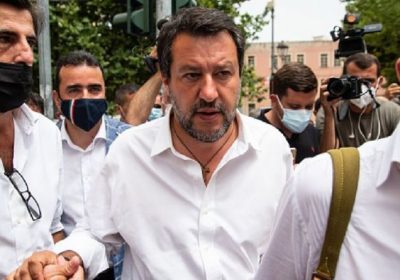 The French President approved legislation that will stop people from entering restaurants and bars without a “health pass”, showing they are vaccinated, have had a recent negative test, or have immunity from COVID-19. The move convinced Italian Prime Minister Mario Draghi to follow suit and to impose the same rules for his citizens from August 6.

Anti-green pass campaigners and eurosceptics have been protesting the measures in both countries since President Macron first announced them two weeks ago.

And now, they are teaming up to make their voices louder than ever.

Lega MPs in Italy have invited Frexit campaigner and leader of Les Patriotes Florian Philippot to their big anti-green pass protest in Rome this evening.

Italian MP Claudio Borghi announced it on Twitter on Tuesday: “Florian Philippot, the organiser of the Paris demonstration on Saturday will also be in Piazza del Popolo tomorrow evening.

“The domino has now started, let’s try to stop it before it’s late.”

Confirming the news, Mr Philippot said: “Invited to go by Italian parliamentarians, I will participate this Wednesday in Rome at the Italian national demonstration against their health pass!

“People united against the infamy, which especially overwhelms EU countries!

“Italians will support us in Paris on Saturday!”

In Germany, the debate caused a bitter split in Chancellor Angela Merkel’s team.

Her chief of staff said on Sunday he fears the number of new coronavirus cases in Germany could soar to 100,000 a day in about two months unless many more people get vaccinated and those who refuse may face restrictions.

Ms Merkel’s chief of staff, Helge Braun, told Bild am Sonntag newspaper that cases were increasing by 60 percent per week even though nearly half the population is fully vaccinated.

“If the Delta variant were to continue to spread at this rate and we don’t counter it with a very high vaccination rate or change in behaviour, we would have an incidence of 850 (per 100,000 people) in just nine weeks,” he said.

That equates to about 100,000 new infections a day, he said, adding that would lead to many people having to quarantine and chaos in the economy.

Urging Germans to get vaccinated, Mr Braun said those who refused might have to face some restrictions.

“This could mean some things such as restaurant, cinema and stadium visits would not be possible for tested unvaccinated people because the residual risk is too high,” he said.

Roughly 60 percent of Germany’s 83 million people have had the first shot of a COVID-19 vaccine and about 48 percent are fully vaccinated.

Ms Merkel has long said there will be no compulsory vaccination.

In the week after President Macron’s July 12 announcement of the bolstered health pass, a record 3.7 million French citizens signed up for vaccination, according to the Doctolib health website.

Italy last week followed in the footsteps of France, announcing that proof of vaccination or immunity would shortly be mandatory for an array of activities, including indoor dining and entering places such as gyms, pools, museums and cinemas.

“The Delta variant is even more of a threat than the other variants,” Mr Draghi told reporters, defending his decision to make the so-called Green Pass obligatory to participate in much of public life.

“The Green Pass is not arbitrary, but a necessary condition not to shut down the economy. Without vaccinations, everything will have to close again,” Draghi said.

Regional governors in Italy said there was a marked pick-up in bookings after Mr Draghi spoke late on Thursday. “I think the prime minister has achieved what he wanted to achieve,” said Giovanni Toti, head of the northwestern Liguria region.