Paris: Emmanuel Macron has warned against the dangers of US-style woke culture, saying the debate in France was becoming increasingly divided along racial lines.

“I see that our society is becoming progressively racialised,” he told Elle magazine. 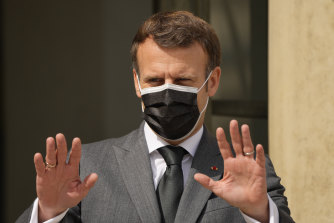 For universalism: President Emmanuel Macron is protective of French culture.Credit:AP

In particular, he took aim at “intersectionality”, a notion popular in American academia that examines discrimination and poverty through the lens of social and political identities, such as race and gender.

“The logic of intersectionality fractures everything,” Macron said.

“I stand for universalism. I don’t agree with a fight that reduces everyone to their identity or their particularity. Social difficulties are not only explained by gender and the colour of your skin, but also by social inequalities.”

The centrist 43-year-old, who is expected to run for re-election next year, added he could think of young white men in his home town of Amiens or nearby Saint-Quentin in northern France “who also have immense difficulties, for different reasons, in finding a job”.

Compiling racial statistics is illegal in France, which is scarred by wartime ethnic profiling and is officially colour-blind. To many scholars on race, however, this is part of a long history of denial over discrimination.

Inspired by Black Lives Matter, the country has seen a string of protests denouncing racism over the past year, notably where it has been linked to cases of police brutality, and the legacy of its colonial past.

Critics, however, have warned against importing woke culture from the Anglo-Saxon world, arguing that an obsession with race and the past traps minorities and women into seeing themselves as victims of oppression and discrimination.

Elisabeth Moreno, a black junior minister for gender equality and diversity in Macron’s government, recently criticised the threat of “cancel culture” and censorship in the name of political correctness.

“The woke culture is something very dangerous, and we shouldn’t bring it to France,” she told Bloomberg.

“Everyone should fight discrimination. You can’t ask someone not to speak about a topic because the person doesn’t feel legitimate. It makes no sense.” She added she refused to be seen as successful because of her gender or race, but for her accomplishments.

“French universalism means that we want to recognise people per se, not because they are women or LGBT+ or because they have a different ethnicity or whatever,” she said.

It is not Macron’s first warning over the issue. In May he warned against judging the past with values of the present after historical figures, Napoleon Bonaparte included, were scrutinised in a global anti-racism reckoning.

Last June, he blamed universities for encouraging the “ethnicisation of the social question” – amounting to “splitting the republic in two”.