Know your enemy — especially when that enemy threatens your honey.

Scientists are taking a page out of Sun Tzu’s The Art of War as they pick through the first Asian giant hornet nest ever found in the United States in hopes of learning more about the invaders.

State officials eradicated the so-called “murder hornet” nest earlier this month after locating it near the British Columbia border in Blaine, Wash. It was a bittersweet win for the Washington State Department of Agriculture, as it tries to prevent the potentially devastating species from gaining a foothold in North America.

Researchers cracked open the tree that housed the nest on Thursday, and they’re now examining the inner structure to learn more about how the invasive species is adapting to life in the U.S. and Canada. They’re also counting up the so-called “virgin” queens in the nest, which will help them figure out if the hornets are setting up new colonies in the area. 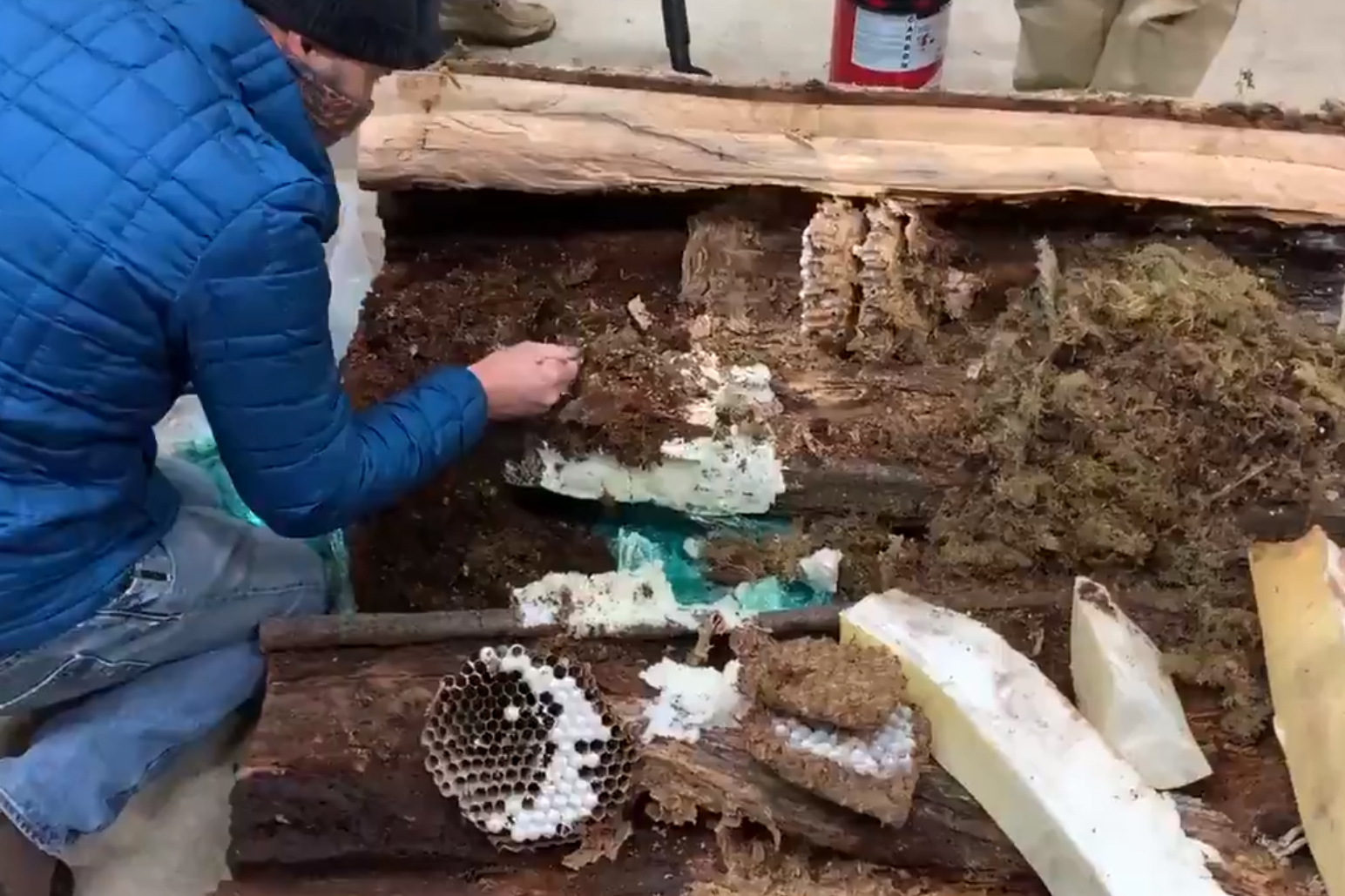 “We had a developing nest with both queens and workers, as well as the new brood that was still developing within the nest,” WSDA spokesperson Karla Salp said in a video briefing on Thursday.

“A large and healthy nest could produce mated queens, which could create new nests in the following spring,” the USDA added in a separate statement.

The frighteningly large hornets measure up to five centimetres long, pack a sting like a red-hot thumbtack, and can slaughter a whole colony of honey bees in a day. The hornets threaten to devastate the already-fragile bee population in North America, which would result in wide-ranging damage to farms and ecosystems.

Images and videos released by the WSDA show several young hornets moving around inside their egg cells, and additional egg clusters stuck together in honeycomb structures built inside the wood. 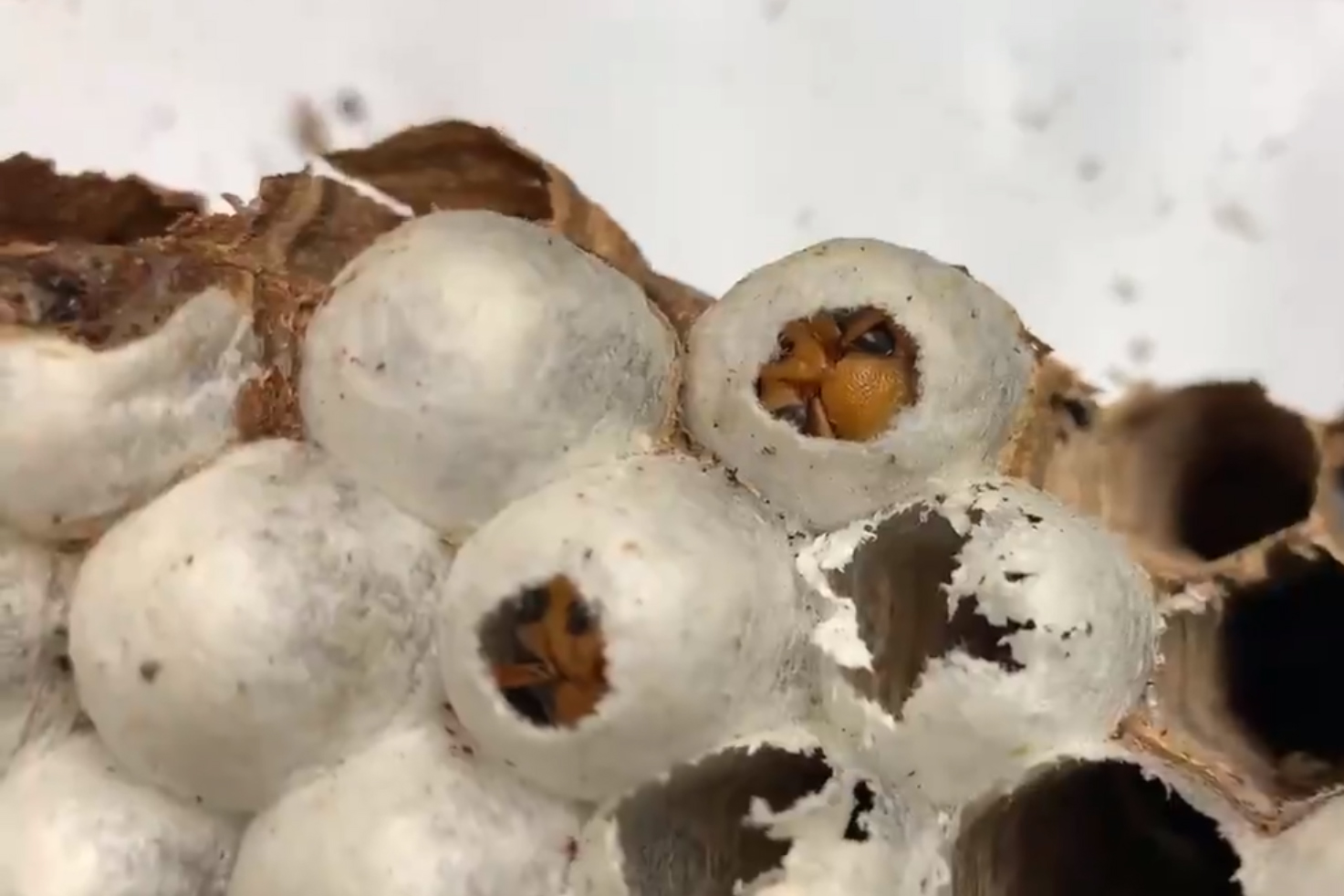 One might be tempted to kill such a nest with fire, but entomologists brought it to a cooler at Washington State University for analysis. The cooler keeps the hornets sedated — and there were several hornets still in the nest to worry about, Salp said.

“At least some of them were still alive,” she said. 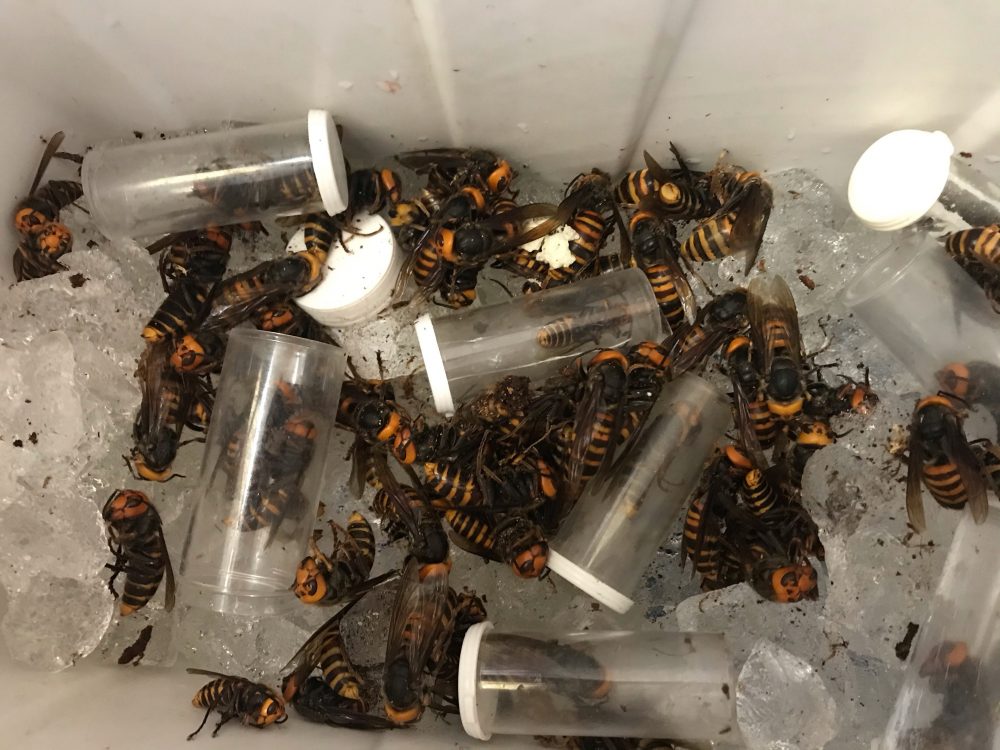 Experts had previously gassed the nest with carbon dioxide.

Entomologists captured two queens trying to escape the nest earlier this week, just as they were cutting it down. They also captured 13 live specimens and killed an additional 85 hornets with a vacuum.

Researchers still don’t know if they’ve found the mother of the brood, and will spend the next several days doing a full inventory of the hornets remaining in the nest.

Salp says the team will be looking specifically for young queens and cells formerly occupied by queens. The count will help them determine how many new nests they need to worry about in the spring.

She says some queens were popping out during the operation to destroy the nest. “There may have also been queens that emerged before we got there.”

The hornets are native to eastern Asia. However, they were first spotted in North America last year, when a few of the massive, yellow-headed creatures were reported near Nanaimo, B.C.

The first known nest in Canada was wiped out on Vancouver Island in the fall of 2019.

The hornets don’t seek out humans but they pack a vicious sting, and they can turn into a deadly swarm when they feel their nest is threatened.

Each hornet has a big yellow head, two huge black eyes, a black body and a black-and-yellow striped abdomen. They can grow to be the size of a AA battery and have hardened shells that allow them to bull through a honey bee colony while shrugging off its defences.

A handful of hornets can raid a honey bee hive, decapitate thousands of its workers and snatch all of its young within a matter of hours.

Asian bees have learned to defend themselves by swarming over the hornets and vibrating their little bodies, which generates enough heat to effectively cook the much larger insects to death.

Researchers have not seen this type of defensive behaviour in North America, meaning the bees likely aren’t ready to deal with this murderous new invader.

The WSDA says it will provide more details about the nest and its population after the analysis is complete.

Entomologists were excited to find the nest because it proved that their hornet-hunting tactics will work.

Researchers trapped a few hornets near the suspected nest, tagged them with radio transmitters and then followed them home. 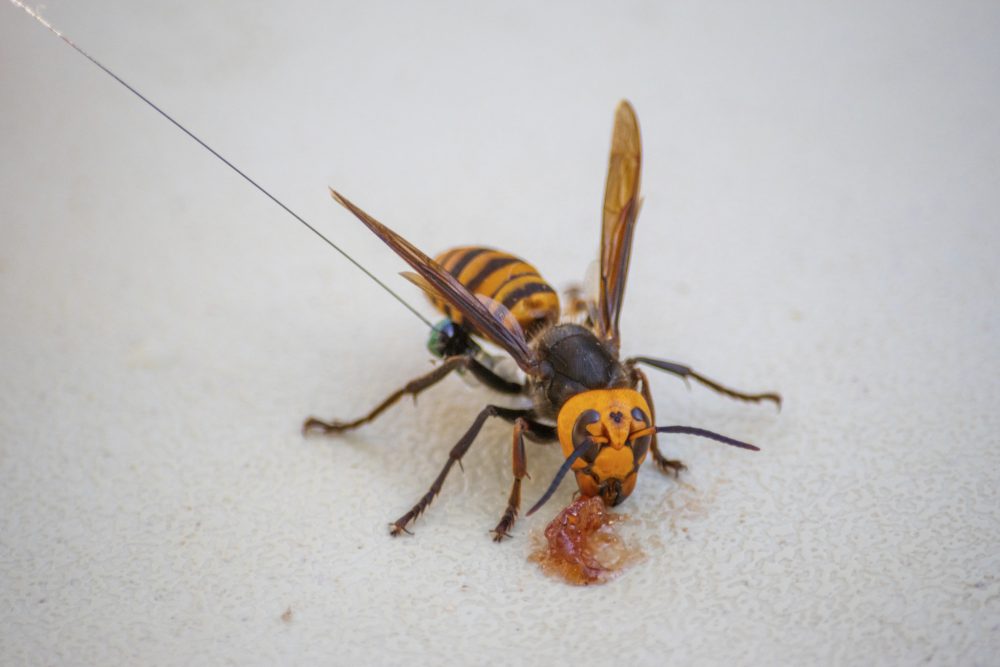 “I’m pretty confident as long as we can get live hornets, we can follow them back,” Sven-Erik Spichiger, the WSDA’s managing entomologist, said at a news conference earlier this week.

“That really gives us a great tool in an overall eradication program.”