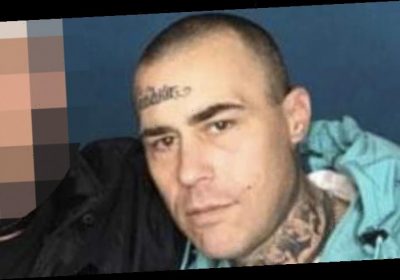 A man accused of murder has chosen not to face court after being charged over the death of a father of four who was shot as he lay in a car wreck near Geelong.

Daniel Eagle, 43, was shot while in the front passenger seat of a white Ford SUV moments after it and an Australia Post truck collided on the Princes Highway, near Harpur Road, in Corio on Saturday morning. He died at the scene. 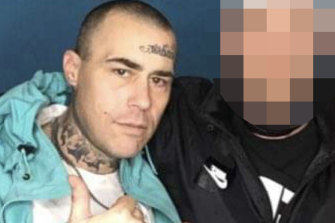 Police allege Joshua Rozynski shot and killed Mr Eagle about 6.05am after Mr Rozynski and another man followed the SUV in a second vehicle.

Mr Rozynski, 26, is charged with murder but chose not to appear before Geelong Magistrates Court on Monday and remained in his cell, as is his legal right.

A police summary says Mr Rozynski and Mr Eagle were known to each other.

Witnesses have told police that after the crash they saw two people from a second vehicle, which had been following the SUV, approach the damaged car and at least one person fired shots before the pair fled. 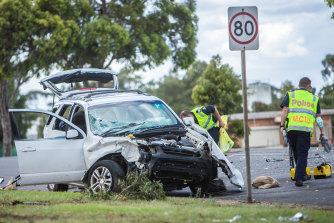 The crash scene in Corio on Saturday. Credit:Scott McNaughton

Police are also investigating a shooting at a home connected with Mr Eagle that was peppered with bullets shortly before the crash and fatal shooting.

Investigators have been granted more time than usual to prepare a brief of evidence against Mr Rozynski as they need to format a large volume of CCTV footage and analyse evidence from electronic devices and the crash scene. They are also waiting on ballistics, toxicology, drug analysis and call record reports.

Two other men in Mr Eagle’s car were treated in hospital with injuries that police said were not life threatening. The truck driver was not injured.

Police also arrested another man, 25, who they believe was in the same vehicle as Mr Rozynski. He was released pending further investigation.

Mr Eagle was a father of four and grandfather who was in the process of turning his life around, friend Karma Lee Grootveld said.

“He was getting better and wanted a better life for himself and even had plans to start his own business. This has all been stripped away suddenly,” she said.

Mr Rozynski, from Corio, is due to appear before court on August 6.

His lawyer said this was his first time in custody.