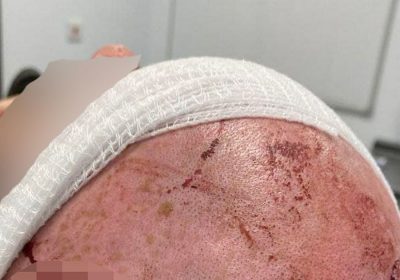 A brave man was savagely beaten and had part of his ear ripped off after confronting a group of badger baiters.

The 41-year-old, who belongs to Manchester Hunt Sabs, was set upon on Wednesday evening, April 28, in Little Lever, Greater Manchester.

Men with two dogs and armed with shovels beat him unconscious after he tried to stop them from digging out a badger den.

He was “left for dead” after confronting the yobs alone, the Manchester Evening News reports.

The victim eventually regained consciousness and was taken to hospital, where he required plastic surgery on his ear and 42 stitches in his head.

The Manchester Hunts Sabs group afterwards urged its members to be careful if they came across similar individuals.

It posted on Facebook: “Call the police straight away as they should treat badger baiting as a serious crime, especially if still in progress. Please also let us know so that we can arrange for the sett to be monitored if possible.

“Badger baiters are notoriously violent, they really are the lowest of the low. We don't know how anyone could derive pleasure from inflicting so much pain and suffering on animals like that. “We would also like to thank the local people that rushed out in the middle of the night to make sure our sab was looked after.

“To say we are angry would be an understatement, but we are incredibly proud of the bravery shown by our sab last night.

“Thanks to him the baiters abandoned their plans and fled the area. This sett will be watched closely from now on.”

A GoFundMe page has since been set up to help the saboteur, and has already raised more than £14,000.

You can donate by clicking here.

A Greater Manchester Police spokesperson said: "Officers were called at 9pm on Thursday 28 April 2021 to Croft Side, Bolton to a report of an assault.

"Enquiries have since established a 41-year-old man had been assaulted by a group of people.

"The man was left with head injuries that required medical treatment. His injuries are not thought to be life threatening.

"No arrests have been made."

Alternatively, details can be passed on anonymously via the independent charity Crimestoppers on 0800 555 111.