A roofer has caught Britain’s biggest ever carp fish but may not claim the record amid fears he will be slated by angling purists.

But because the fish is an imported specimen that was put into a lake many years ago weighing 15lbs, some anglers feel it is not a British fish.

Traditionalists say records should only relate to ‘wild’ fish that have spent years growing to their full weight.

It follows the fishy story of angler Tom Doherty who in 2016 received death threats for trying to claim the record for a 70lb mirror carp imported from Israel.

Mr Mansford, from Windsor, Berks, said any detractors are just jealous of his achievement. 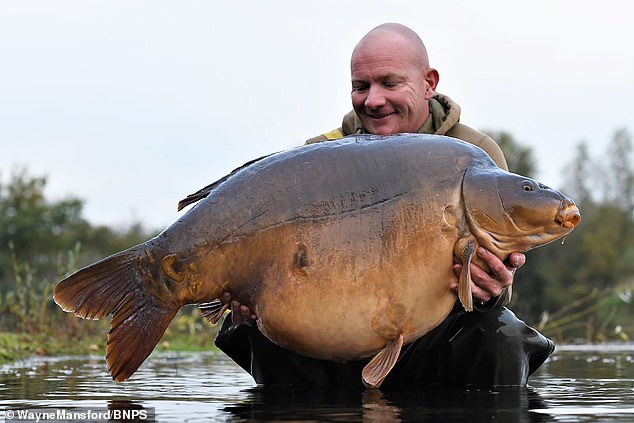 Wayne Mansford, 38, with the record breaking carp which weighs in at 75lbs 2oz he caught this week but is hesitant to apply for record over angling controversy surrounding imported fish

However, he is unsure if he wants the hassle surrounding a record claim.

He said: ‘I have already received a lot of negative feedback from some people.

‘At the end of the day a carp is a carp to me. I’m in a great place knowing what I have achieved but I know previously people have gone as far as receiving death threats.

‘It could be a British record but I just don’t know whether I want to go through all the controversy.

‘People get very angry about imported fish and I think a lot of it is probably just jealousy.

‘All carps are imported at some point but I’ll have some discussions with people and see what we decide.’

The angler, who has represented England at the sport, enticed the beast using a pellet and sweetcorn bait. 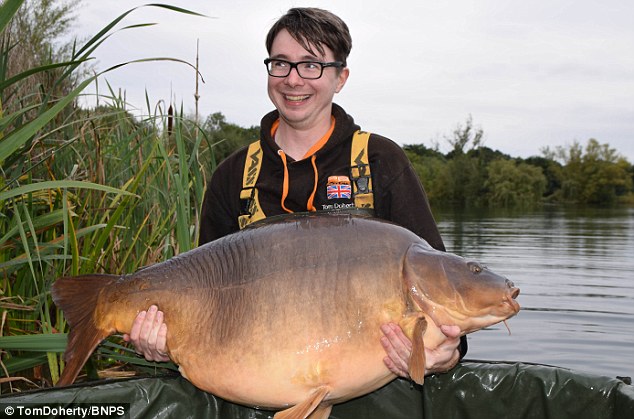 Tom Doherty, above, received death threats when he caught the big fish and broke the British record prompting the investment banker from Essex to say he almost wishes he never caught it

It took Mr Mansford ten minutes to reel in.

Such was the unbelievable weight, he initially thought his scales were broken and so double checked using a friend’s set.

After confirming the size and posing for pictures he returned Marshall to the water safe and well.

That night the teetotal Mr Mansford celebrated with a cup of tea and a hot cross bun.

He said: ‘The fight took around ten minutes and it wasn’t until I tried to lift it that I realised how heavy it was.

‘I couldn’t believe it when I saw what was on the scales – I even let out a scream and checked I wasn’t being tricked by the scales.

‘It’s an amazing carp and I celebrated with a hot cross bun and a cup of tea at the end of the day.’

The British Record Fish Committee, which deals with record claims, has a number of guidelines when deciding on imported species.

These include the weight of the fish when stocked into the water, the length of time the fish has been in the water and the origin of the fish and its history prior to stocking.

They also look into whether the fish has been fed on natural food and anglers’ baits only, without supplementary feeding or other treatments. 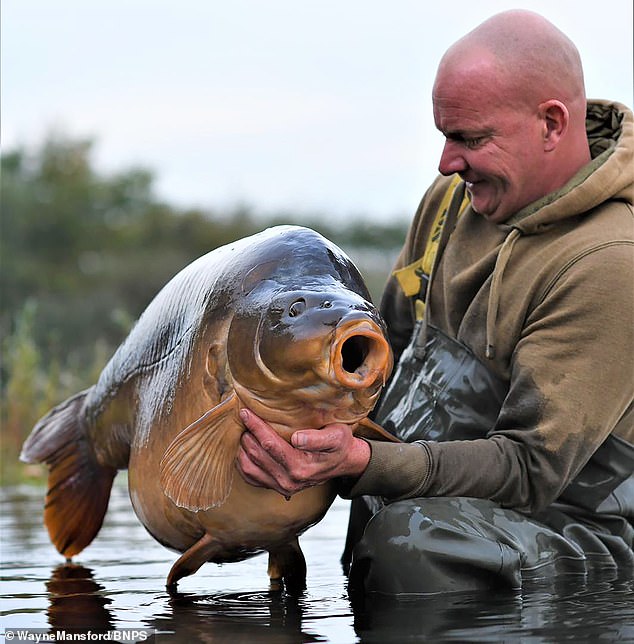 Wayne Mansford, pictured with his record-breaking carp, says he has already received negative feedback from the angling community but says it’s mostly from those who are jealous

A spokesman for the committee said: ‘Out of respect to the captor we won’t comment on this individual catch until an application is made.

‘What I will say is that we have rejected a fish from Holme Fen in the past because it is a fed water.

‘However, that may have changed and it is important we treat every application on its own merits.’

The potential record-breaker was caught on Monday.

Since then some anglers have carped on about its purity.

Fran Rice posted on social media: ‘Another artificial fish! Unnatural bred in a carp factory, and people pay anything up to £200 to catch these.’

Dylan Kent said: ‘Not a record, its an imported Israeli carp.’

The current British record for a carp is held by Dean Fletcher who caught a specimen weighing 68lbs 10z at the Wasing estate fishery in Berkshire in 2016.