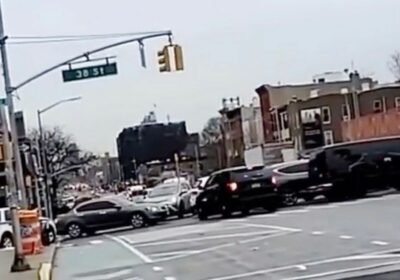 Multiple people have been shot at a busy Brooklyn subway station in New York City, the city fire department said.

Firefighters found several bloodied passengers lying on the floor of the station after responding to reports of smoke at the 36th Street station in Sunset Park in Brooklyn.

New York City police and members of the NYPD Bomb Squad said they were responding to reports of people wounded either by gunfire or an explosion.

The fire brigade confirmed that at least 13 people are believed to have been injured by shrapnel including five who were shot, according to the New York Times.

NYPD News tweeted: "Due to an investigation, avoid the area of 36th Street and 4th Avenue area in Brooklyn. Expect emergency vehicles and delays in the surrounding area.

"In regard to the multiple people shot at the 36th Street subway station in Brooklyn, there are NO active explosive devices at this time.

"Any witnesses are asked to call @NYPDTips at #800577TIPS. Please stay clear of the area. More provided information when available."

They added that delays and emergency vehicles are expected in the area.

Witnesses claim the gunman was wearing a gasmask and an orange construction vest.

The shooter is said to be at least 5 foot 5 inches tall.

The man was spotted throwing a device in the Brooklyn subway station and then opened fire, police told NBC New York.

Photos from the scene showed people tending to injured people lying on the floor.

It is currently unclear where the gunman is.

The Metropolitan Transit Authority says they are also investigating the incident and that D, N and R trains are holding in both directions.

A video posted on the Citizen app shows a heavy presence of law enforcement in the area.

New York Governor Kathy Hochul said she has been briefed and will work with law enforcement on the investigation.

You can also get email updates on the day’s biggest stories straight to your inbox by signing up for our newsletters.