Man is reunited with wallet that was stolen 20 YEARS ago 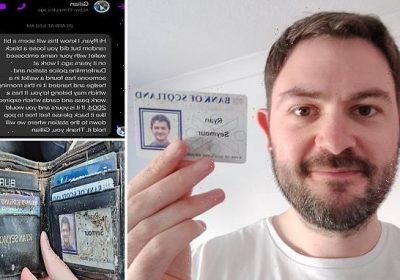 A graphic designer has been reunited with his wallet that he lost 20 years ago – and it was found outside the same pub where he last had it.

Ryan Seymour, from Lochgelly, Fife, was able to collect his wallet from his local police station and was shocked to find all his bank cards and ID cards still inside.

The 37-year-old had been visiting The Elizabethan pub in Dunfermline, Fife in 2001 to have drinks with his friends when he lost the billfold – with £60 cash inside.

Ryan was shocked when was contacted by police on Facebook to inform him that it had been handed in, although the cash had been stolen.

The personalised wallet had been handed by a passer-by who had spotted it in a bush outside the boozer he had been visiting at the time.

The lost wallet dates back to a time when Tony Blair was Prime Minister, you could still rent a video from Blockbuster and pints were on sale in places for less than £3. 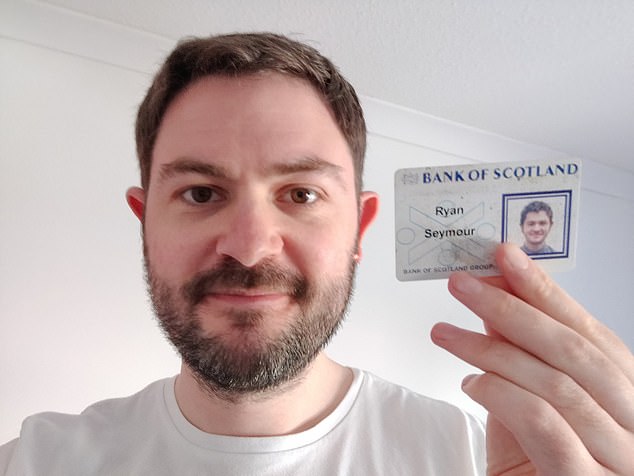 Ryan Seymour, pictured, was reunited with his wallet 20 years after he lost it at a pub in 2001

Although the £60 cash was gone, the wallet still contained all the bank cards and his work ID

Ryan snapped images of his wallet after collecting it from Dunfermline Police Station, showing a younger version of himself in his photographic ID.

He shared images of the worn wallet on Twitter on Saturday, writing: ‘Well ladies and gents.

‘You might remember a few weeks ago, the police got in touch to say my wallet had been handed in, that was stolen 20 YEARS AGO. Well. Here it is*’

Ryan had initially posted on Twitter about being contacted by the police about his wallet in April this year.

Sharing screenshots of the messages from a police officer, he wrote: ‘Just got this message and honestly I can’t stop laughing.

‘Somebody has handed a wallet in to the police that I lost 20 YEARS AGO. hahahaha.’ 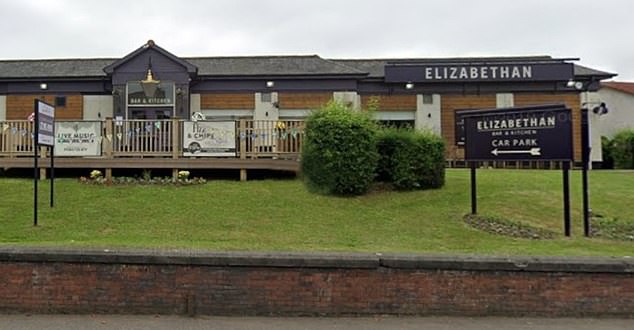 As well as his bank cards and employee card, the wallet still contained this library card

Sign of the times: as well as a VHS rental card, the wallet also contained this ringtone card

The screenshots show a Facebook message from an officer called Gillian, who wrote: ‘Hi Ryan, I know this will seem a bit random but did you lose a black wallet with your name embossed on it years ago.

‘I work at Dunfermline Police Station and someone has found a wallet in a hedge and handed it in this morning which may belong to you. It has a work pass and cards which expired in 2004.

‘If it is yours and you would like it back please feel free to pop down to the station where we will hold it. Thank you Gillian.’

Ryan replied: ‘Hi Gillian. Honestly it was so long ago I can barely remember, but I do recall somebody stealing my wallet I left in a toilet cubicle by accident years ago.

‘Amazed it’s shown up, I will pop in and grab it purely for sentimental reasons. Thanks for getting in touch.’

Speaking today, Ryan said: ‘The police messaged me about four weeks ago. It took me a while to get around to collecting it. They said somebody found it in a bush very near the pub it was stolen from.

‘£60 was in it. I remember the exact amount because it’s been a running joke with my friend who was with me that he was due me the money.

‘We are still good friends. He’s finding this whole thing hilarious. We just went out for a few games of pool and a few pints that day.

‘It’s all a bit of a blur. A total contrast to my life now that I’m married with a two year old. Back then it was party time.’

Ryan added: ‘It was funny to see me as fresh faced and innocent on my old employee card but the VHS rental card made me chuckle I must admit.

‘I still have no idea what that ringtones card is all about!’