Man jailed after attacking ex-girlfriend who had stabbed him 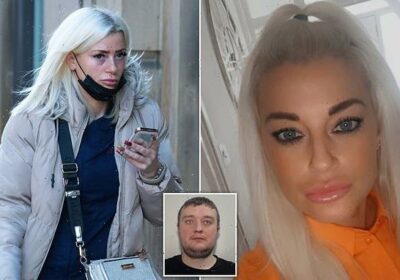 Mother, 37, who was previously spared jail for stabbing her abusive ex-boyfriend in self defence tells court how he tracked her down in her new home and attacked her again – as he is sent to prison for two years for assault

A mother-of-two who was spared jail for stabbing her drunken and abusive boyfriend has helped send him back to prison after he tracked her down and beat her up again during a 2am attack.

Emma Westwood, 37, was given a suspended sentence for causing grievous bodily harm after she snapped and twice knifed Christopher Clark in the stomach and left him for dead when he came at her with a broken bottle last year.

But as she tried to make a new life for herself and her two children, Clark, also 37, turned up unexpectedly at her home near Stretford, Greater Manchester in July, demanded to be let in and then poured vodka over her head and pulled out her hair extensions.

During the assault, Clark locked all the doors so Westwood could not escape before dragging her away from a window in front of one of her young children as she screamed at neighbours for help.

Earlier that day Clark had been freed from jail over another incident in which he had hounded Westwood. Police inquiries revealed a restraining order which banned Clark from contacting his ex-girlfriend had been breached six times. 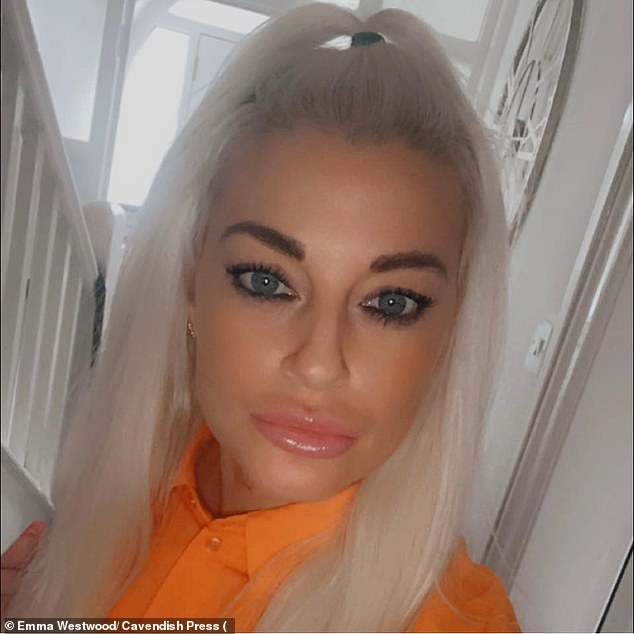 Emma Westwood (pictured) was spared jail last year after stabbing her abusive ex-boyfriend. He has now been sent to prison after he tracked her down and beat her up during a 2am attack 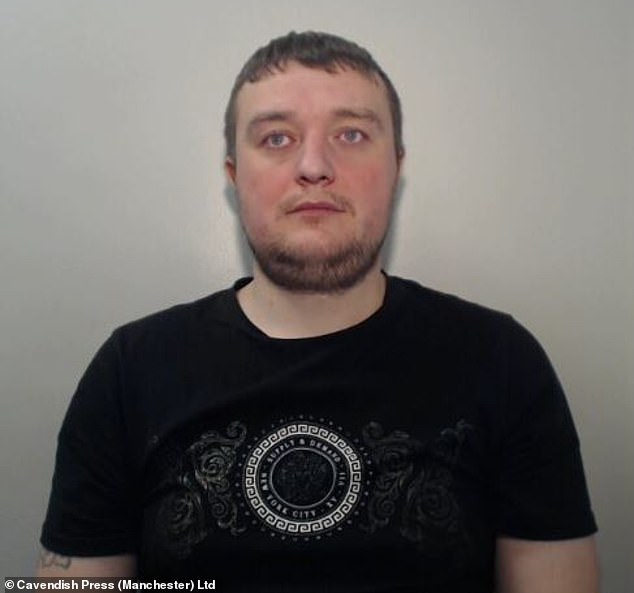 Christopher Clark, 37, (pictured) turned up unexpectedly at Westwood’s home near Stretford, Greater Manchester in July, poured vodka over her head and pulled out her hair extensions after he demanded to be let in

At Minshull Street Crown Court, Clark, who has one child with Westwood, was sent back to jail for two years after he admitted assault occasioning actual bodily harm and harassment.

In her victim impact statement Westwood said: ‘I felt absolutely gobsmacked when he turned up at my home, especially when he had been told so many times not to. I hate feeling like a victim in my own home.’ 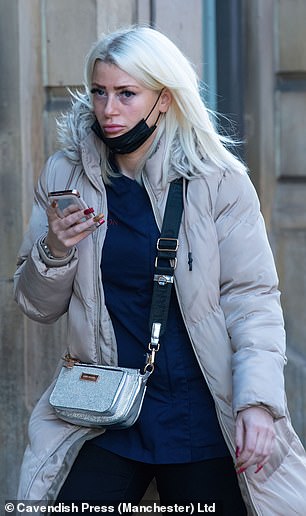 The couple began their toxic romance in June 2018 but the following year Clark was convicted of sending menacing messages to Westwood and of battery after he bit her face during an argument. He was locked up for two years with a three-year restraining order put in place.

But after being freed early on parole, Clark repeatedly harassed Westwood and in February 2020 he was sent back to prison for 26 weeks for breaching the restraining order.

Westwood and her children moved to a secret address in the hope Clark would not find her but following his release he discovered where she lived and in April 2021 attacked her in the kitchen of her home.

During that terrifying 3am head-to-head confrontation, Clarke broke down the front door of Westwood’s home and lunged at her with the broken bottle of vodka only for her to fight back and stab him twice in the chest. He fled into the street before collapsing outside.

Police were called to the scene by Westwood’s father and found Clark lying on the pavement outside with blood pouring from his wounds. Clark recovered from his injuries but declined to give a statement to officers. Westwood was arrested after she admitted to stabbing him in self-defence.

Last December at Minshull Street Crown Court Westwood faced jail after being charged with causing grievous bodily harm with intent. But the mother-of-two wept as she was given a 16-month jail term suspended for two years after prosecutors accepted her plea to the lesser charge of unlawful wounding due to Clark’s abusive behaviour. 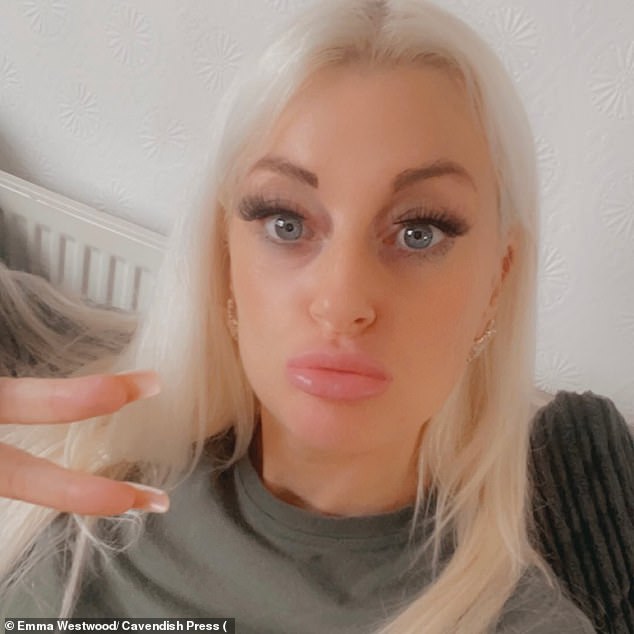 The latest confrontation occurred on July 4 this year after Clark had been returned to prison again for pestering Westwood and sending her text messages.

Kate Laverty, prosecuting, said: ‘Soon after he was released he emailed the victim asking if he could come to her address, to which she declined. Later that day Clark attended the address, without permission, and demanded that the victim lend him some money for a taxi. The victim then gave the defendant her bank card and he left the address.

Timeline of a toxic romance

June 2018 – couple start their relationship and have a child together.

September 2019 – Clark convicted of assault and sending abusive messages and jailed after he bit Westwood in the face during a row.

December 2019 – Clark charged with harassing and assaulting Westwood over the Christmas holidays.

April 2021 – Westwood charged with intent to cause GBH after she stabs Clark during row. He is charged with breach restraining order.

July 2022 – Clark charged with assault and breach of a restraining order after another attack on Westwood.

‘Then in the early hours of the next morning, the defendant returned to the address while in drink. He had with him a bottle of vodka and demanded that the victim come outside and talk to him. The defendant began to make banging noises and the victim feared this would disturb her neighbours. She therefore decided to let him into the house.

‘Once inside an argument started between the two over the defendant’s decision to turn up at the address. The defendant then used the back of his hand and hit his partner around the face and she fell to the floor. He then pulled the victim’s hair extensions off her scalp and poured the bottle of vodka over her while she was still on the floor.

‘The defendant then took the victim’s phone and locked the doors of her house so she could not escape. The victim then ran upstairs and into her son’s room where she opened the window which faced the street and called out for help. She was able to get some attention from neighbours before the defendant dragged her away from the window by her arms.

‘Police arrived at the address after a neighbour had reported the incident. When they arrived they found the defendant at the back door of the house with the bottle of vodka in his hand. The incident lasted for approximately 20 minutes.

‘The defendant was arrested and taken to the nearby police station where he was questioned. He gave no comment throughout the interview but did say that the bruise on the victim’s eye was already there before he arrived at the house. He also told the police that the bruising to her neck came from consensual sex they had prior to the incident.’

Clark, who has been in custody since his arrest, admitted harassment and assault.

In mitigation defence counsel Adam Roxborough said: ‘He now realises that this is a relationship that must end. He was himself a victim of wounding by the victim in this case and he now just wants it to end so he can get on with his life.’

Sentencing, Judge Mark Mark Savill said: ‘There is a little bit more in this than meets the eye as you two did have a troublesome relationship but that is no excuse for your flagrant disregard of orders made by the court. What makes matters worse was that you attended the victim’s house on the day of release. You wanted more contact between you and her and she made it plain, no you can’t.

‘This isn’t a case causing serious physical or emotional harm but the victim has made it abundantly clear from her statement that she is sick of it. You have made this woman’s life a real misery. It is clear that you are a very manipulative individual.’

Clark was also made subject of a new indefinite restraining order.