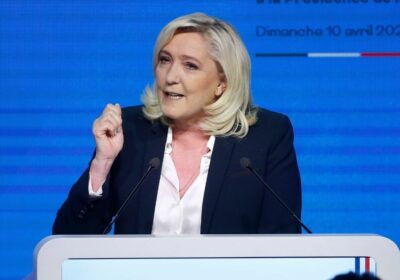 Le Pen vowed to implement the “essential” ban of the headscarf in public areas if she won the election because it is part of the “Islamist uniform”. When asked about her headscarf ban during a visit to a market, Ms Le Pen stated her view that the hijab is a “uniform imposed over time by people who have a radical vision of Islam”.

She continued: “Women who don’t wear it are isolated, are victims of pressure, and insulted.

“I won’t tolerate this, all women in France must be able to live completely free.”

The proposed ban and her connections with President Putin have led President Macron to argue that his rival continues the image of the National Rally party as racist, xenophobic and “far-right”.

In an interview on Thursday, Emmanuel Macron said: “There, facing me, is a far-right project that wants to make France the first country in the world to ban the headscarf in public places.”

He added: “Under the constitution, if she bans the veil, she’ll have to ban the kippah, the cross and other religious symbols.”

When asked for his stance on the issue, the President said that the veil “was not an obsession”.

France banned face covering attire that hid the whole face such as the burka in public in 2010 but the hijab is common in France with an estimated population of four to five million Muslims.

Ahead of the final run-offs on the weekend, Ms Le Pen is playing down her policy on headscarves as she noted during a TV interview that it is not the “most urgent element” of her manifesto.

Instead, she maintains that it represents a small part of her determination to fight the “totalitarian Islamist ideology”.

She stated: “Not all women who wear the veil are Islamists but many are victims, that’s the reality.”

Over the weekend, the far-right candidate has sought to relax her headscarf policy as she noted that the issues involve “complex problems” and that “there will be debate”.

DON’T MISS:
POLL: The next Prime Minister needs to have clean hands if Boris quits (POLL)
What to do with tulips after they have bloomed (INSIGHT)
Europe travel: How to apply for a GHIC (REVEAL)

Campaign spokesperson Sébastien Chenu said on BFM TV: “Our goal is not to fight against women, it is to protect and liberate those on whom the [Islamic headscarf] is imposed either by social or family pressure.”

In her final attempts to gain voters, Le Pen has concentrated on immigration, security issues and the cost-of-living crisis.

Over 16 polls which have been conducted by different groups have all concluded that Macron will win the election for a second time by between seven and 12 percent.