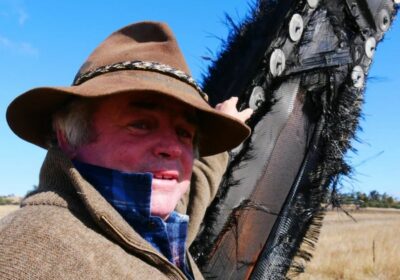 A massive hunk of space junk put into orbit by the world’s richest man Elon Musk has crash-landed in a farmer’s field.

The three-metre-long trash slammed down in the Snowy Mountains in New South Wales, Australia.

Mick Miners said he became aware of the unexpected landing after his daughters heard a loud bang.

READ NEXT: Elon Musk's dad 'not proud' of him – says he should lose weight and prefers brother

Penetrating the ground, the huge bit of debris is thought to be from a SpaceX Crew-1 craft that has been floating in space since November 2020. This particular mission took two people up to the International Space Station.

Brad Tucker of the Australian National University was dispatched to check out the mysterious find and was able to confirm that it was undeniably space junk.

Speaking to radio host Ben Fordham on Monday morning, he said: “This is most definitely space junk which was part of the SpaceX Crew-1 trunk.

“SpaceX has this capsule that takes humans into space but there is a bottom part… so when the astronauts come back, they leave the bottom part in space before the capsule lands.

“There was a plan of having it come down on Earth and purposely hitting the Earth's atmosphere so it would break apart and land in the ocean.”

People across New South Wales reported explosions and a loud bang, in what turned out to be the impact at Mr Miner’s field.

Expert Mr Tucker continued: “We saw most pieces land in the ocean but clearly some hadn't because this three-metre piece was speared into the ground from space.

“From a distance it looks like a tree almost, like a burnt tree, and then you get closer and you realise 'hey that's not right'.”

He said that the operation of actually finding the trash was difficult as it came down a long way from Mr Miner’s house.

“The Australian Space Agency is now handling it because there is actually a legal protocol… so technically it's still SpaceX's,” he added.

“We assume they don't want it back because the whole point was to break in the ocean.

“Now if SpaceX said they want it back, well then they have to essentially pay Mick and Jock to get it all back.

“However, if they are able to keep it, they have options including giving it to a museum, selling it on eBay.”

He added that for many Mr Tucker’s find could be a very desirable purchase.

“They get a little tidy sum for all the trouble they have been put through," he said.