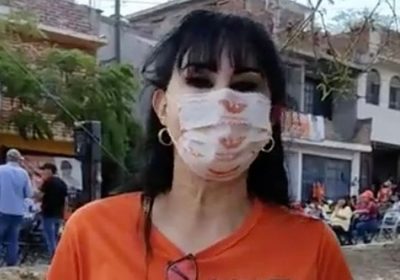 A Mexican mayoral candidate was shot dead after she revealed her location while posting a video on Facebook Live.

Alma Barragán, 61, invited potential voters to come and meet her on Tuesday while attending an outdoor event in the Guanajuato municipality of Moroleón.

In the video she encouraged voters from La Maguita, El Ombligo, and Pico de Pájaro neighbourhood to meet with her and listen to her government plans, reports Mail Online.

An hour after posting her video, a group of men opened fire at the event, killing Alma Barragán and wounding two others.

Guanajuato is Mexico's most dangerous state, and this latest assassination marks the 88th political candidate killed ahead of the upcoming mid-term elections.

Barragán was running for the Citizen's Movement (Movimiento Ciudadano) and was the third nominee from the party who was murdered in just over two weeks.

In her Facebook Live to voters, the 61-year-old said: "Hello how are you? I'm here in La Manguita with Pedro Guzmán (Street). If you like to join me, come and hear my proposals.

"Come to spend a moment together,' she said. 'Together we do better. Thank you. I'll wait for you here."

The Citizen's Movement is a social-democratic party that believes in the protection of human rights and gender equality.

"It should not be impossible to participate in political life without putting your life at risk."

'This is the most violent election in the history of Mexico and in Movimiento Ciudadano we are not willing to normalise it."

"It is very unfortunate what happened yesterday with this candidate who was murdered, our condolences to her relatives," López Obrador said.

'It is a regrettable situation because it occurs in the middle of the electoral process, we are on the eve of the elections and these are people who want to generate instability."

It is not known whether Barragán leaves behind a partner or children. The mid-term elections will be held on June 6.