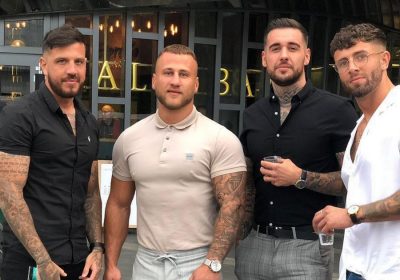 The four friends who shot to internet fame after a photo of them in skinny jeans went viral have been hired by McDonald’s.

The pals – known as the Four Lads in Jeans – became a meme sensation thanks to a picture of them outside an All Bar One in Birmingham taken in 2019.

Kevin Rooney, Alex Lacey, Jamie Phillips and Connor Humpage were mercilessly mocked as the snap was shared thousands of times – and later revealed the impact it had on their mental health.

However, they are now starting to receive work offers, and Kevin has taken time out for a McDonald’s ad.

The self-proclaimed “good-looking one” – and the only lad wearing socks in their photo – is helping the fast food chain promote their Click & Serve side of the business.

He said: “When the opportunity came around to work with McDonald’s the lads were buzzing.

"I mean, it’s McDonald’s. It doesn’t get much bigger than that! And to be a new face, or voice, of the brand is such a privilege.

“We might be famous now but getting your McDonald’s easily and safely is still a top priority. We were chuffed when McDonald’s asked us to help promote and educate people about how to use Click & Serve.”

The function allows customers to order their meal and have it delivered directly to their car via the My McDonald’s App.

Last week, the lads revealed they were planning a reunion once the pandemic ends.

Jamie, 28, told Metro.co.uk : “We’ve had our fair share of stick but a reunion goes without saying.

“The first time we’re allowed out it’s happening. I’m going to wear skinny jeans, in fact I’m going to play it up.

“That picture wasn’t a one off, I wear them whenever I’m out. I go to the gym, I’m six foot four, I’ve got skinny legs.”

He added: “I’d love to just walk into the Slug and Lettuce in Coventry with the lads, that would be really cool.

“Everyone knows us there and we haven’t seen everyone for so long because of Covid.”

"I feel like when something like this happens you’ve got to stick to your roots and see all your friends first, you don’t go straight to London or Newcastle.

"But I’m very spontaneous, if you phone me up tomorrow and say, ‘Jay we’re going here’, I’ll be there."