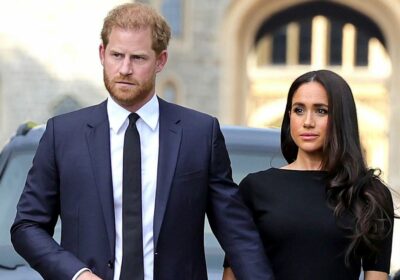 Meghan Markle and Prince Harry may attempt to reconcile with King Charles in the UK after reports emerged that the Duchess of Sussex has been put forward for an award, a royal commentator claimed.

Meghan and Harry recently returned to their home in Montecito after spending an extended period with the Royal Family following the Queen’s death, where they reunited with Prince William and Kate Middleton following rumours of a rift.

The ex-royals are now expected to settle back into their celebrity lifestyles, and reports have emerged that Meghan is set to be recognised with an award for her charity work at the GQ Awards, which take place in the UK in November.

READ MORE: Prince Harry warned memoir windfall 'will half if he dampens royal attacks in book'

Speaking on his YouTube channel, royal commentator Neil Sean has claimed that the Sussexes may use this opportunity of a UK return to paint a picture of harmony with the new King.

“This is all to do with the fact that Meghan apparently has been offered the chance of an award,” he suggested.

“They want to pick up the opportunity to reconnect with His Majesty King Charles… They really want to see if they can get together and paint a more consolidated picture for people here in the United Kingdom and around the world.”

After quitting his royal life, Harry reportedly fell out with his father, and alleged that he had been “cut off financially” by the new monarch during a controversial interview with Oprah Winfrey.

Nonetheless, with the Duke and Duchess of Sussex now relying on brand opportunities to fund their LA lifestyle, Neil suggested that there could now be an opportunity for the feuding pair to reunite.

He explained: “Many cynics might say – not me – that the value of having a wonderful picture with our brand new King, resplendent in his new role, it speaks oodles for their brand moving forwards.

“If you’re uncynical, you could say that Harry and Meghan simply want to draw a line under the past, given all those books, bad press and endless tit for tat interviews that they’ve given.

To get more royal stories from Daily Star delivered straight to your inbox sign up to one of our free newsletters here.

“Either way, Meghan and Harry are pushing ahead to try and get something in the diary with our brand new King for their return visit here in November.”

This comes as speculation has circulated surrounding the prince’s memoir, which is set for release later this year.

After Harry initially announced that the book would be “an accurate and firsthand account” of his life, there have been suggestions that the former royal is now amending sections of the autobiography following the Queen’s death.