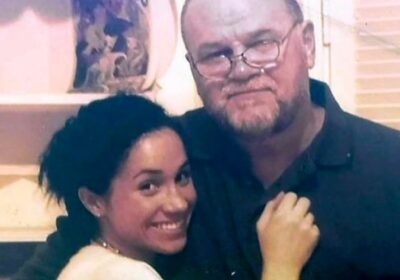 The father of Meghan Markle, Duchess of Sussex, has hit back at her claims that she “lost him”.

Responding to her interview in The Cut, Thomas Markle said that “she dumped me” and that she ‘knows where to find him’.

Meghan's The Cut interview covered everything from her children, the royal family and Instagram.

Carried out largely in the home of Meghan and Harry in Montecito, California, the 41-year-old said: “Harry said to me, ‘I lost my dad in this process.’ It doesn’t have to be the same for them as it was for me, but that’s his decision.”

She was talking about Harry and his father Charles’ relationship, which is understood to have come under strain since the couple left the UK for the USA.

However,OK! reports that Omid Scobie – a friend and biographer to the couple – said: "There seems to be confusion in some headlines about this quote in The Cut interview.

“I understand that Prince Harry is actually referring to Meghan's loss of her own father, and Meghan is saying she doesn't want Harry to lose his.”

Now Thomas, 78, has spoken out to try and give his side of the story to theMail On Sunday.

"She didn't 'lose' me, she dumped me. I am not lost. She knows where to find me. My number hasn't changed.

"I would love to hear from my daughter and meet my son-in-law and my grandkids for the first time."

He added that, despite all this, he is still recovering from a serious medical situation – a blood clot on the brain. The pair haven't seen each other since before Meghan and Harry's wedding in May 2018.

Thomas said: "I am still very ill and trying to recover from the stroke in May. Yet every time she opens her mouth she brings me into [the story]. It never ends."

It wasn’t just this part of the interview he commented on though – Thomas also gave comments on Meghan’s discussion of forgiveness.

Thomas didn’t buy this though, saying: "If she really believes in forgiveness, then why can't she forgive me?"

He says he has apologised for the pain he might have caused, adding: "Every time she gives another interview it brings up all the pain and causes so much stress.

"I am still very sick. I am going to speech therapy and doing the best I can to get better, but it is all very upsetting."

A spokesperson for Meghan has been contacted for comment.