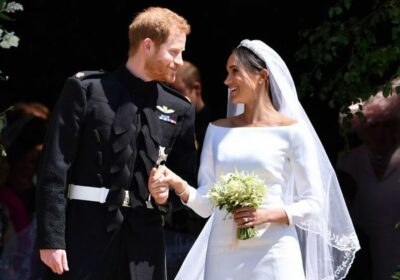 The former Suits star arrived at the chapel with just two page boys after her estranged dad Thomas Markle pulled out at short notice, while a frazzled Meghan was spotted struggling with her dress after her veil became entangled with the vehicle.

An aide along with dress designer Clare Waight Keller for Givenchy allegedly rushed to assist her, but a military escort who had opened the car door for the soon-to-be princess reportedly didn't step up to help the struggling Meghan – and one royal expert claims to know why.

Author Tom Bower spoke to hosts of the Mirror 's podcast Pod Save the Queen for an upcoming episode, claiming: "A military man told me an extraordinary story about Meghan when she arrived at the wedding at Windsor Castle on that glorious day in 2018.

"You see her get out of the car unaccompanied and she has problems with the train of her dress and the army officer doesn't step forward to help her.

"And the reason is, is the day before in the rehearsal, she had been very rude to him so he thought 'well I'm not going to help you today'.

"I didn't get the story from him but a fellow officer of his, who explained what had happened."

A spokesperson for Meghan has been contacted for comment.

Bower was speaking after the publication of his bombshell book about the Sussexes, titled Revenge: Meghan, Harry and the War Between the Windsors.

In an early excerpt of his bombshell new publication, he even accused Meghan of "abrasive" treatment of staff and diplomats while she was on a royal tour.

And the book contains a plethora of shock claims about the ex-royal couple, but Harry is expected to tell his side of the story when his new memoir is released.

Despite numerous delays and panic over its contents, Harry's book is now expected to hit shelves in November.