Mexico City: Mexican prosecutors will investigate officials who under the previous government handled a "discredited" probe into the 2014 disappearance of 43 student teachers, the attorney general's office says.

The abduction and apparent massacre of the trainee teachers by corrupt police working with a drug gang sparked international condemnation of Mexico and seriously damaged the reputation of then-president Enrique Pena Nieto.

Last week, his successor, President Andres Manuel Lopez Obrador, said the government would file a complaint to the attorney general over the release from prison of one of the main suspects behind the September 26, 2014, disappearances. 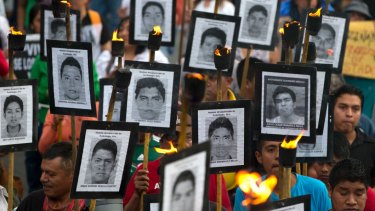 Family members of 43 missing teacher’s college students carry pictures of the students in a 2016 protest against closing the case.Credit:AP

A judge ordered the release of Gildardo Lopez Astudillo, the gang leader blamed for ordering the killing of the students, after finding that officials had tortured him to obtain evidence.

In a statement, the attorney general's office said that a special prosecutor's office would present the necessary evidence so that the officials "who had failed in their duties" could be held accountable for their handling of the case.

The previous administration's investigation had been "permanently discredited" by both public opinion and relatives of the victims, the attorney general's office said.

The UN human rights office said in a report last year that Mexican authorities had probably tortured dozens of people during the investigation.

Pena Nieto's popularity never fully recovered from the scandal, and a panel of independent experts picked holes in the official account of the investigation into the fate of the 43 students that was led by then-attorney general Jesus Murillo.

That account stated the students were killed and then incinerated by gang members after their abduction in the southwestern city of Iguala. However, investigators have only definitively identified the remains of one of the 43.

Lopez Obrador, who took office in December, promised during his election campaign to launch a truth commission to find out what happened to the students.