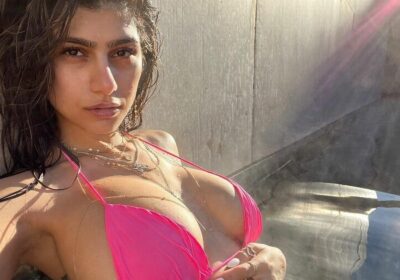 The Lebanese-American OnlyFans model is travelling through Europe once more and first touched down in the UK on January 3.

As per usual, she's been keeping fans up to date with her adventures on her Instagram Story where she was seen in her favourite British town, Whitstable in Kent, over the past few days.

Mia now appears to have hopped over the channel, sharing a picture of the Eiffel Tower lit up late last night (Tuesday, January 17).

She also attended a party hosted by designer fashion brand Off White in collaboration with the Chicago Bulls basketball team, with whom they are also collaborating on a new line of clothes.

It was from there that Mia managed to nab something.

This comes after Mia moaned about being left freezing in one of her holiday homes.

It was back in Whitstable earlier this week when she revealed she was staying in a 300-year-old property.

"Staying in a 300-year-old house is cool until the 300 years starts 300 yearsing," she said in an iMessage, shared on Instagram in a screenshot with a picture of Mia wrapped up in several layers.

In the message exchange, a friend can be seen replying with: "There's no heat??"

She would have certainly been chilly in the UK without heating this week, with several inches of snow falling and temperatures dipping well into negative figures.

The Met Office were even forced to issue a fresh weather warning today (Wednesday, January 18).

Up to 10cm (4in) of the white stuff could settle in parts of Scotland, the national weather agency said.